The Omega Speedmaster is the most iconic timepiece of Omega and one of the most iconic watch designs in the world. Most known for being the first watch in space, having been a part of all six lunar missions.

The modern version of the Speedmaster is a representation of Omega’s adventurous pioneering spirit. It has a hesalite crystal which is ideal for space missions since it doesn’t shatter. The hesalite crystal can be easily polished from scratches if needed. There are several version of the Omega Speedmaster, but the two most common are the Automatic with sapphire crystal, and this one, the manual with hesalite crystal. Among collectors, this Omega Speedmaster tends to be more popular due to the fact that it is the closest watch to the Moonwatch, and because of its historic importance. The watch that was worn on the moon featured a hesalite crystal because hesalite doesn’t shatter the way sapphire crystal does, and having a sapphire crystal shatter inside of the space rocket would be dangerous. Furhtermore, because there is no gravity in space, having an automatic movement with a rotor would mean that the rotor would rotate very unpredictably, and therefore, it makes more sense to have a manual movement.

The iconic Speedmaster watch has small seconds sub-dial, 30-minute recorder and 12-hour recorder along with a central chronograph hand. The black bezel of the Speedmaster has a tachymetric scale. The case is 42mm and is attached with a solid Omega bracelet.

The Omega Speedmaster is one of the most iconic watches in the world, and among collectors, it’s simply a must-have timepiece. The Omega Speedmaster comes with Omega’s large box, which features plenty of interesting accessories, such as a tool for removing the bracelet, a steel Speedmaster medal, a “space strap” for wearing the watch on top of a space suit, a loupe, and more…

You can never really go wrong with the Omega Speedmaster. Its timeless design has passed the test of time, and the modern version of the Speedmaster are very similar to the earlier models, which goes to just just how great of a design it has. 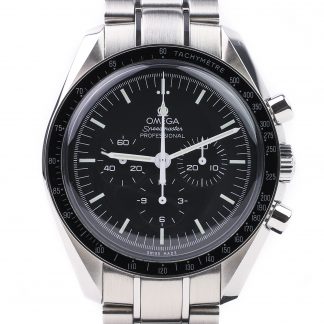