Omega Speedmaster Moonwatch Professional Apollo 15 35th Anniversary Red gold and steel reference 3366.51.00. This watch comes as a full set with box and papers. The warranty is dated 2010. The watch was in production between 2006-2007, making this watch a late example originally sold as a New Old Stock in 2010. The watch is in excellent condition but shows some signs of wear. Please refer to the images.

With its limited production number of 1971 pieces, this Speedmaster is sure to become a popular collector’s piece. This watch was made to commemorate the 35th anniversary of the Apollo XV mission. Its unique design features include a red gold bezel, pushers, and crown. 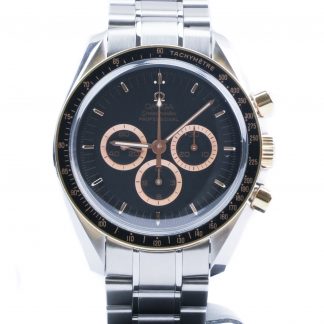