The Red Tudor Black Bay features gold text on the dial, also known as Gilt, just like the predecessors that the Black Bay range paid tribute to did. The Black Bay 79220R features a Swiss ETA movement, and In 2013, the Heritage Black Bay won the “Revival” Prize at the Grand Prix d’Horlogerie de Genève. The striking red color of the 79220R derives from the early Submariner models which the Black Bay pays tribute to since early models had a similar red color.

It’s easy to believe that with Tudor’s new introduction of an updated version of the Black Bay, featuring an in-house movement, the demand for the earlier ETA versions would decrease, however, it’s actually the opposite, as collectors see the Black Bay ETA as more attractive – partly because the case is thinner on the 79220 models. 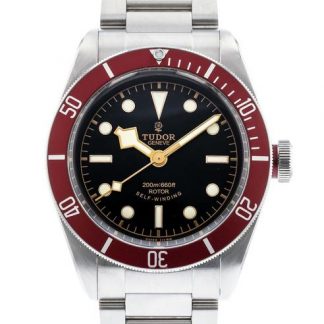