The Tudor Black Bay 79220N is a very special watch. It is part of Tudor’s relaunch of the brand, and the launch of the first modern diver’s watches from Tudor. The 79220N is now discontinued, just like the two other colors red and blue of the 79220 range, in favor of the newer 79230 that house in-house movements. But what’s so special about the black Bay 79220N is that it was only manufactured for 6 months before being discontinued. As a result, there aren’t a lot of 79220N that have been manufactured, and there is a lot o speculation of whether it will become a collector’s watch, and frankly, we’re already seeing price increases in the market of them, so we can only assume that they will become more sought-after in the future. 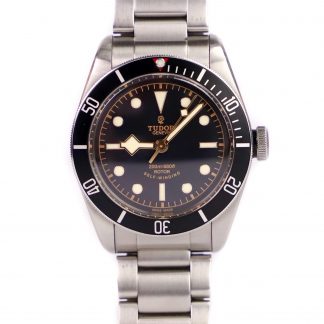