The first version of the Tudor Black Bay after the relaunch of the Tudor brand. This means that it has the self-winding automatic and very reliable ETA 2824 caliber.

The Black Bay Blue carries the Tudor rose on the crown and on the dial.

The Tudor Black Bay was first launched in 2011 as a part of the Tudor brand relaunch. The Tudor Black Bay watches were instant successes, as they built upon the Early Tudor Submariner models which were appreciated and sought-after by collectors due to their iconic design and their close relationship with Rolex at the time. The Tudor Black Bay was released in three colors: Blue, Black, red, and the striking blue color of the 79220B is a popular color. The Black Bay watches features many design features that pay tribute to the early Tudor Submariner models and that work as a nod to the past. This includes elements such as the aluminum bezel, the matte dial, the big crown with no crown guards, and the iconic Tudor rose on the dial.

With the discontinuing of the 79220 range, in favor of the new 79230 Black Bays featuring in-house movements, one may think that the demand for the 79220 watches decreases due to the fact that they feature ETA movements, but it is actually the opposite. In fact, with the newer 79230 model, people feel that it has moved a bit too much away from the heritage of Tudor, with things like removing the rose on the dial in favor for the new Tudor shield logo, however, the main reason is that the newer Black Bay is much thicker. It is expected that the demand for the 79220 Tudor watches will increase, thus making it a potential collector’s item in the future. 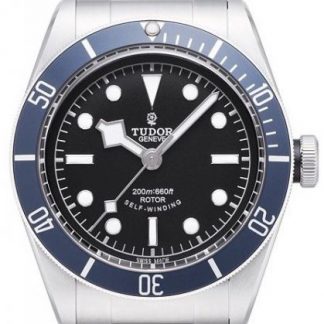