Unworn Tudor Heritage Black Bay reference 79220R New Old Stock complete with box and papers, unworn and with all original factory stickers. The certificate is dated 2019. The watch is never worn but has minor marks due to being a display watch.

This model has been out of production for several years, and thus finding an unworn example of this watch featuring all factory stickers has become increasingly rare. Not to mention an example which has a certificate that is dated 2019. This means that this watch is still covered under Tudor’s two-year warranty.

The reference 79220R has the iconic “smiley face” and Tudor rose on the dial, as opposed to the new straight text and Tudor shield logo. With this in mind, this watch is sure to become a future collector’s piece due to its importance for the Tudor brand.

The 79220R has a striking burgundy red bezel, a matte black dial with a rich texture, and gilt printing on the dial. This watch has Tudor’s old Oyster-style bracelet as opposed to the new “rivet bracelet” which Tudor uses for its new Heritage Black Bay reference. The Tudor Heritage Black Bay reference 79220 was released in 2012 as part of the Tudor brand’s relaunch. The watch became an instant success and has played an important role for the brand ever since. This makes this watch a future collector’s piece. 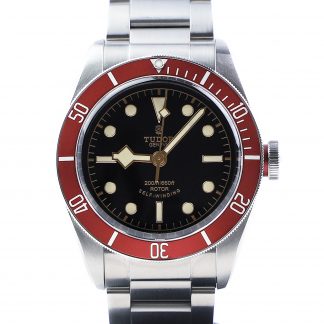