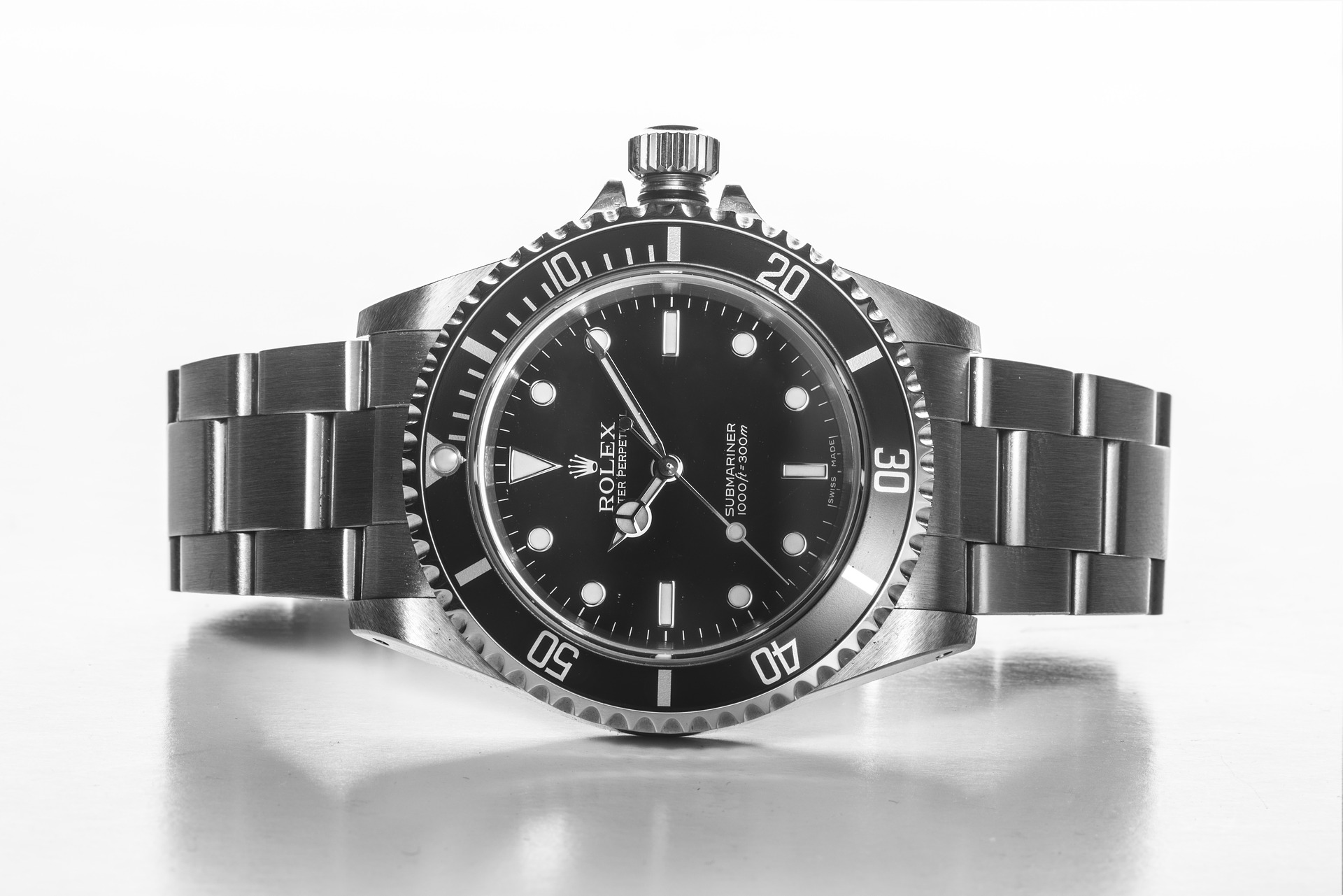 The Rolex Submariner needs no further introduction, and it’s safe to say that the iconic design of the Submariner and its distinctive case shape has had a huge influence on future watch designs – both by Rolex and also by several other watch brands.

The history of the Rolex Submariner 14060

Everything about the Submariner is appealing. It’s accurate and durable movement, its sporty yet universal look, and its unmistakable quality. But there’s one thing that many collectors and Rolex buyers have found disturbing, and that is the date window and Cyclops of the most popular Rolex Submariner, and the Submariner that was in production together with the 14060 – the 16610. 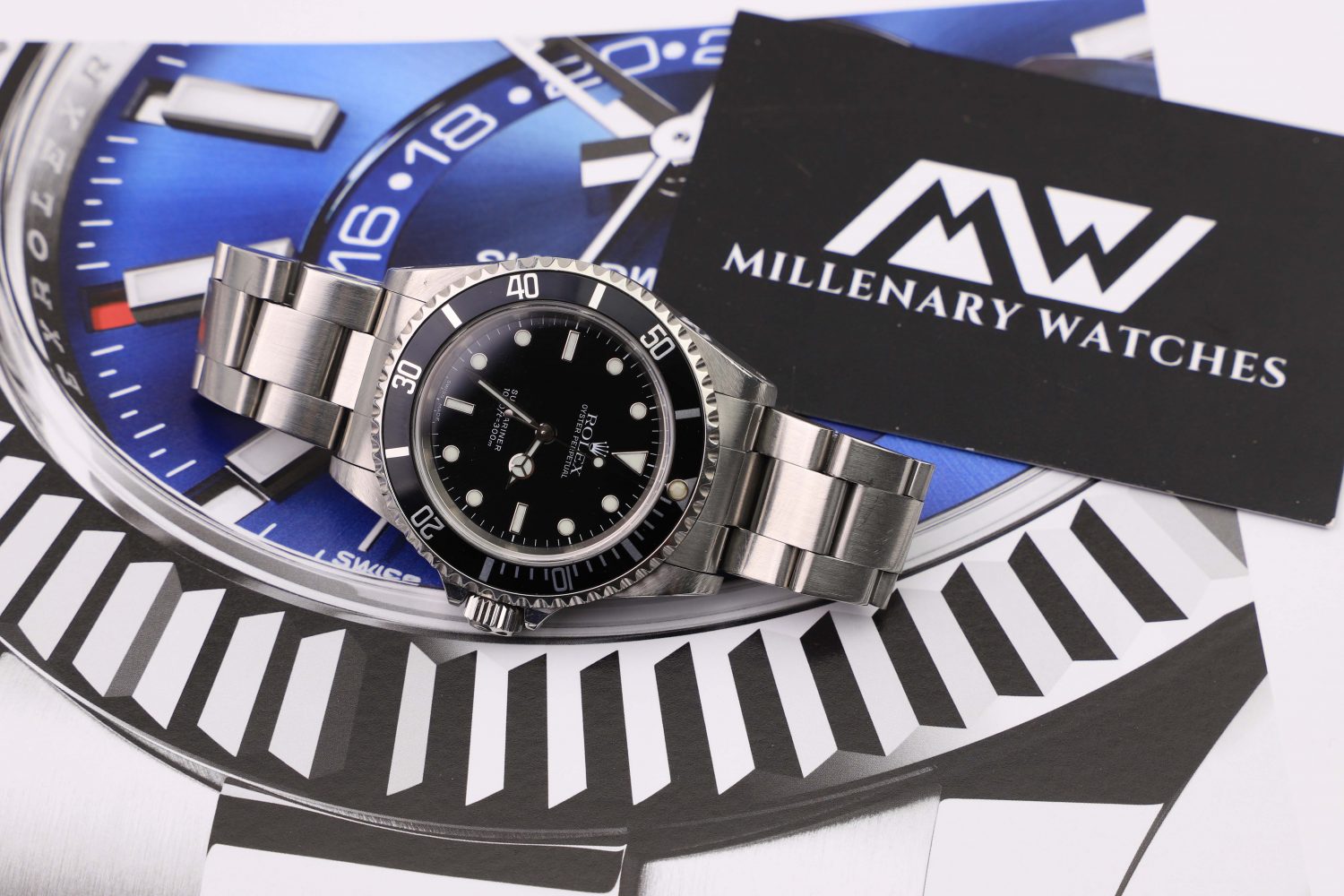 While the date function is a helpful feature for keeping track of the date, the date window and cyclops harm the harmony of the design of the watch, and most importantly the symmetry of the dial. Some people also argue that when diving, you have there’s no real need to keep track of what date it is. And after all, the Submariner is a diver’s watch.

The solution for the people who dislike the aesthetics of a date window and cyclops? The no-date version of the Submariner, the Rolex Submariner 14060. 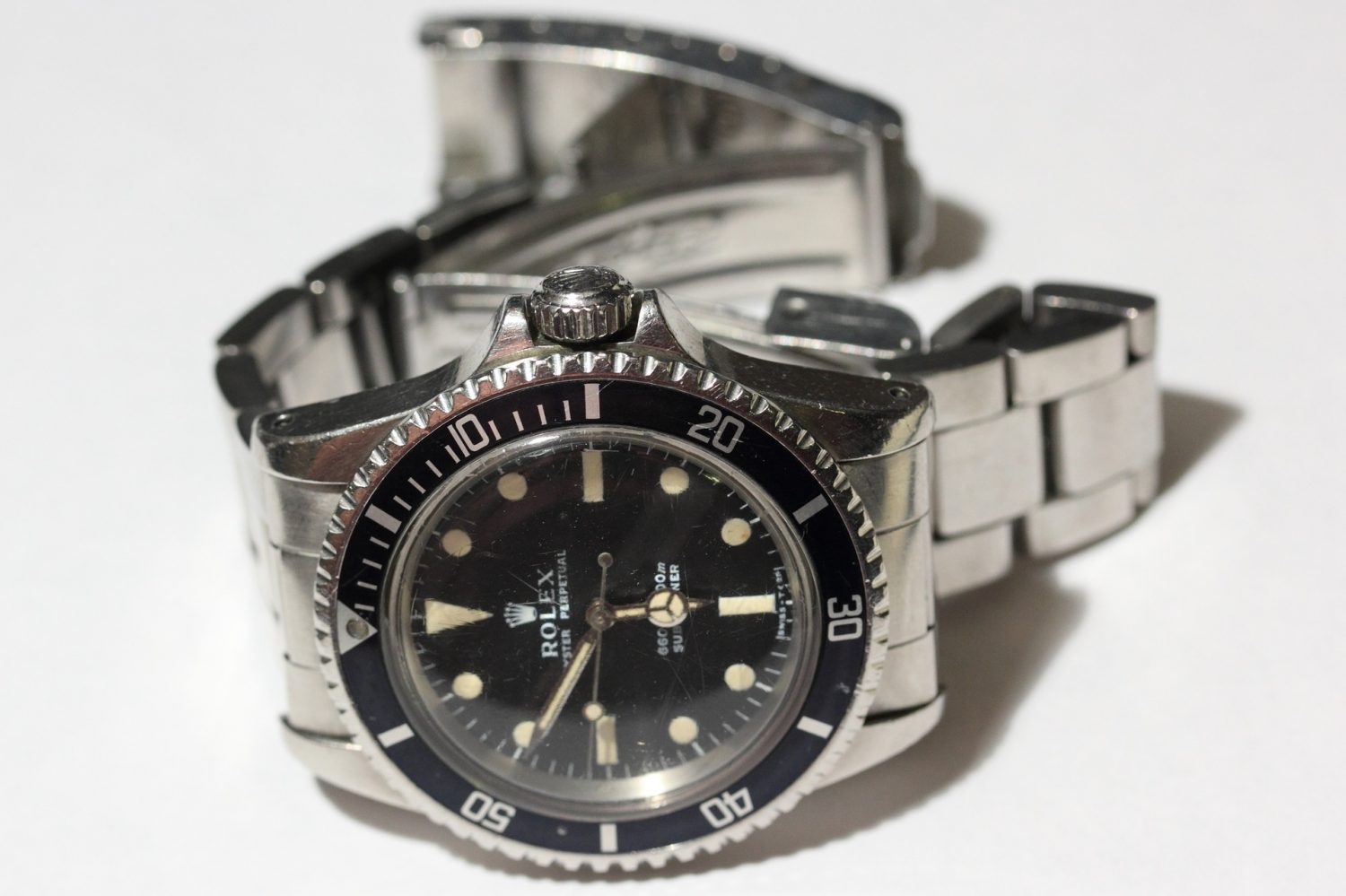 Today, Rolex has two ”types” of stainless steel models in their lineup of Submariners that vary in function, and this is a date version and a no-date version. The 14060 and the 16610 came to become the ”start” of Rolex’s setup of offering Submariner two models side-by-side with and without the date, which has, in modern times been replaced by the 114060 and the 116610.

In other words, with the introduction of the Submariner 14060, Rolex offered an alternative Submariner to the individuals who preferred the aesthetics of a no-date Submariner because of the market’s demand for such.

Many collectors also preferred the 14060 above the date version because of the historical and prior Submariner models. The original Submariner never had a date function until the 1680 because of the fact that it didn’t make sense for a diver’s watch, to have such. It’s important to remember that originally, the Submariner was a tool watch, particularly made for divers, and therefore, the Submariner 14060 was closer to the design of the earlier Submariner models, such as the 5513 and the 5512, and thus added to the appeal from a historical standpoint.

But over the years, as other, more accurate and helpful diver’s tools became available, the Submariner more and more became a commodity watch that was worn by people who just liked the watch for what it was and as an everyday watch, and in many cases never came near the water with the watch, more than when washing their hands. During this time, it made sense to add a date function since it was truly helpful for a watch that was worn as an everyday watch.

When the 14060 was released, it paid tribute to the historical roots and the Submariner range and was a modern watch built on old history. In true Rolex fashion, the Submariner 14060 was very similar in design to the succeeding Submariner watches but was improved and refined to suit the demands of the market.

The new Submariner 14060 features a Sapphire crystal, which was something relatively new to watches at the time. Like its predecessor, and like the modern Submariner watches, the 14060 offered a 300m/1000ft water resistance. It was equipped with Rolex’s now iconic Triplock crown, which brought a greater sense of security to the wearer about the watch’s water resistance. To further ensure that the watch is water-resistant, the case of the Submariner 14060 has Rolex’s well-known Oyster case construction.

On the dial, the 14060 only has two lines of text ”Submariner” and 100ft=300m”. This was a vintage detail to the watch which also uncluttered the dial since the successor had four lines of text. It featured a unidirectional rotating bezel in aluminum. The unidirectional bezel helps prevent divers from overestimating how long they’ve been in the water and thus risking running out of oxygen, which now has become a standard for dive watches for safety reasons. Just like all modern Rolex Submariner watches, the case is 40mm.

The watch also abandoned the previous Rolex caliber 1520 and changed it with a newer, more frequently beating Caliber 3000. The Submariner featured lug holes, just like the predecessor.

The watch featured Rolex’s 93150 bracelet with end links. The bracelet features a handy diving extension, which is, by today’s standards flimsy and not so robust.

Almost all 14060 models were equipped with tritium lume, which can be seen at the bottom of the dial at 6 o’clock, saying ”Swiss-T<25”. This eventually came to be replaced with the new Superluminova, and on these 14060 models, the text at 6’o clock is simply ”Swiss made”, which allows you to differentiate between tritium and superluminova 14060s – and thus also earlier and older versions of that model.

Later in the production, the mode also got an engraved rehaut, which is now standard on all Rolex watches.

Many of the tritium 14060 Submariners have now started to show signs of aging, slowly turning to a creamy color, as opposed to the original white color.

The Submariner 14060 was discontinued in 2002 and replaced by the 14060M. These watches are almost identical, and the only way you can tell them apart by looking at them is that the 14060M has two added lines on the dial saying ”Superlative chronometer” and ”officially certified”. In other words, the difference between the two models is that the 14060M was a certified chronometer according to COSC, whereas the 14060 was not, and this was something that Rolex was proud of, showing an accurate movement, and thus wanted to show that by adding it to the dial. This is only true from 2007 and onwards, however, since it wouldn’t be until 2007 that the 14060M became a certified chronometer. The M in the reference stands for modified, as this was exactly what the movement was.

In order to achieve this COSC certification, Rolex changed the movement from the caliber 3000 to the caliber 3130.

The new movement was equipped with a Breguet overcoil and a full balance bridge that allowed for a greater degree of stability and shock resistance.

Different from earlier Submariner models, the 14060 has white-gold applied markers. The white gold won’t develop a patina over time, as opposed to the pained indexes that tend to ”expand” and become less precise in shape as they get older. It also features Rolex’s iconic Mercedes hour hand which is designed to increase the legibility of the watch – in particular in poor conditions -, especially underwater.

The Submariner 14060 is made in Rolex’s now iconic 904L steel which is corrosion-resistant, as opposed to the 316L steel which Rolex previously used, which in some cases started to rust. This is of course especially important for a diver’s watch. The stainless steel is brushed which adds a sporty look to the watch. 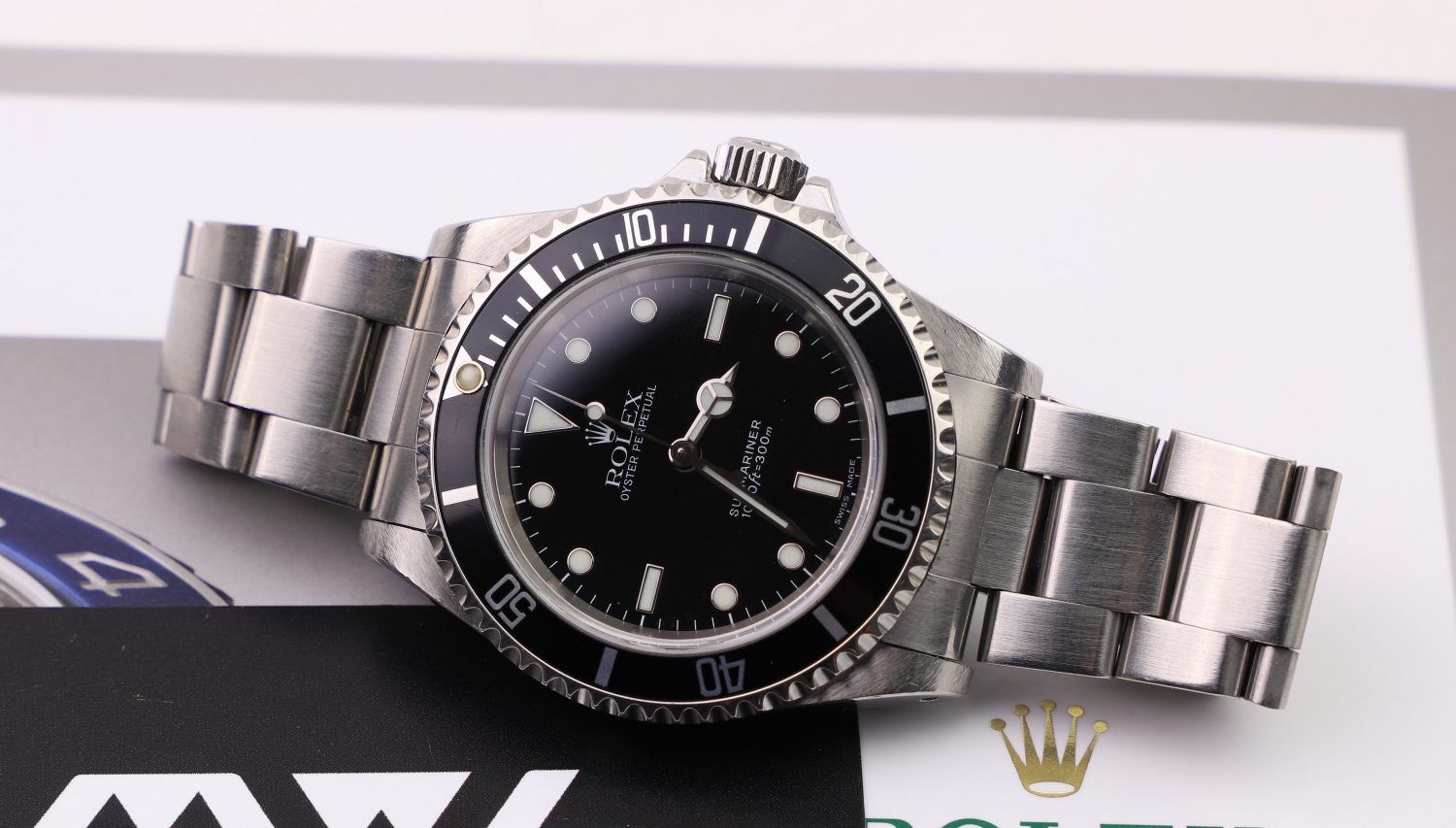 In 2012, the 14060M abandoned the lug holes on the case, and this came to put an end to the classic Submariner era, eventually, leading to the introduction of the new-style case of the 114060 – the Maxi-case, which showed modern and new proportions of the Submariner collection. In that sense, the 14060M is the last timepiece with the classic-sized case

The Rolex Submariner 14060 is truly an icon in Rolex’s lineup of watches and will continue to increase in popularity over the years, as it is celebrated as the last classic Submariner watch from Rolex, carrying many traditional design features, in contrast to the modern Submariner watches from Rolex. In many people’s eyes, the 14060 is the perfect Submariner with a perfectly-executed case size.

The 14060 is celebrated for its perfect symmetry, contrary to the date variant, and has passed the test of time, proving to have a truly timeless design.