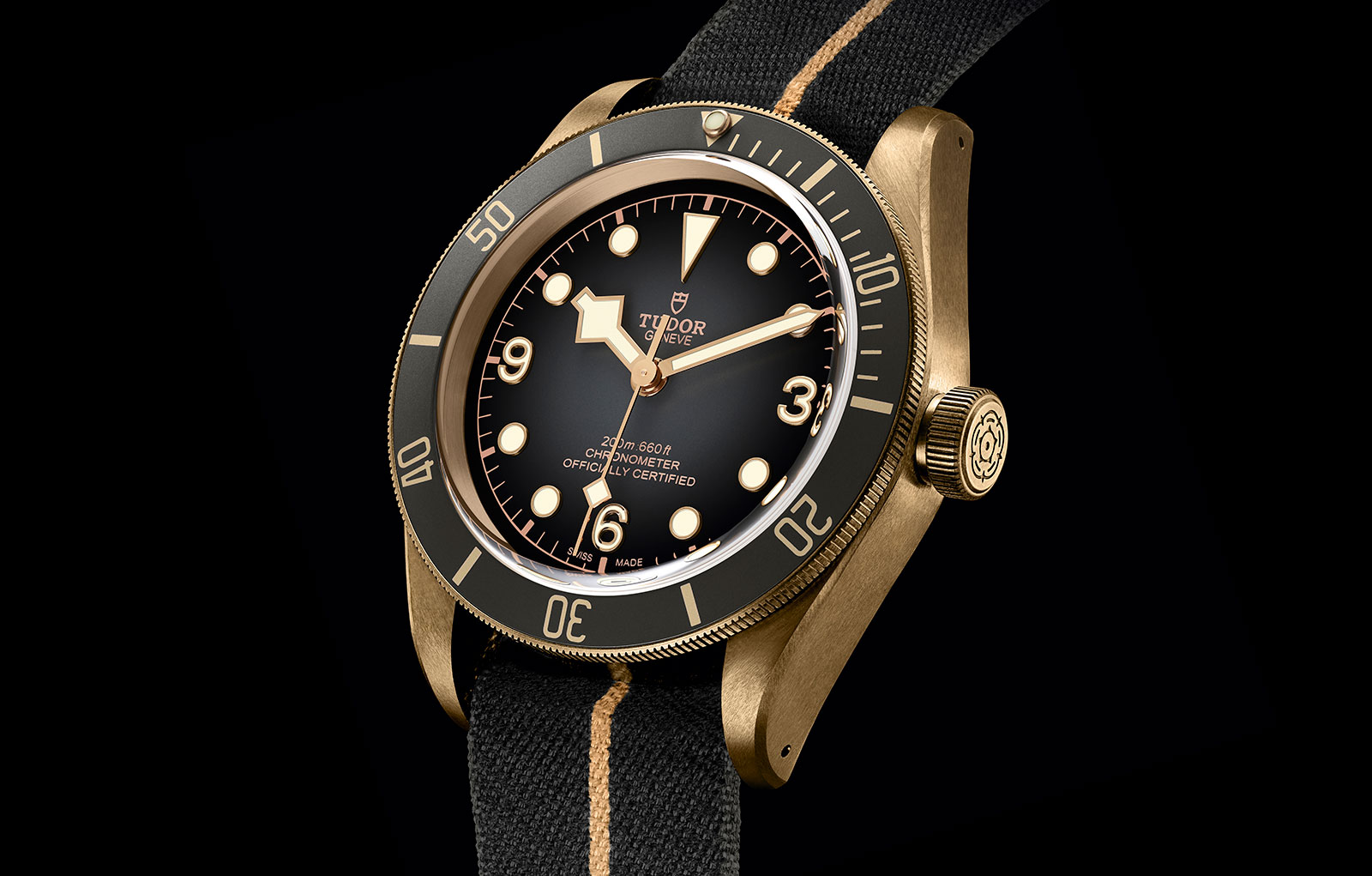 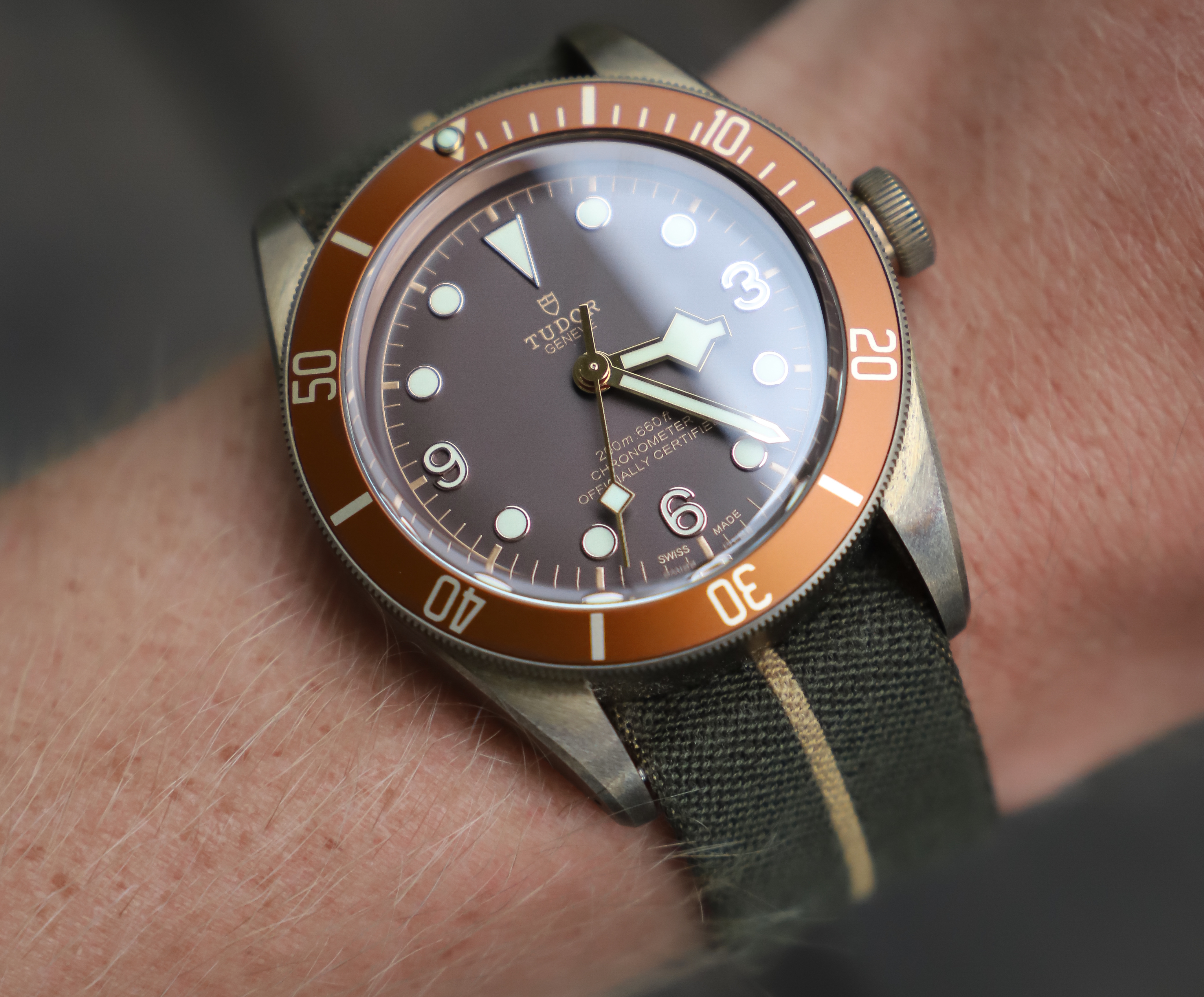 The “old” Tudor bronze watch was released in 2016, and you can imagine, because the watch is so special, some people hate it, and some people love it. The bronze material used is actually a reference to the material brass used in old ships and diving equipment. And while they are not the same material, they look quite similar. Bronze for watch cases is quite special due to the aging nature of bronze. Over time, bronze will go from a goldish color towards very dark green/brown.
And again, some people love the concept that they can see their watch age without having to wait several decades before it starts to show patina, but instead, can see their bronze watch age and change personality relatively quickly. And because Tudor uses an aluminum-bronze alloy, the color will be more towards brown, rather than the green of copper-based bronze alloys, more common in watchmaking.

While the Tudor 79250BM was discontinued, the successor, reference 79250BA is actually almost identical to it. There are only a few differences, and that is the dial and bezel. The original Black Bay Bronze has been replaced with a new version that has a graduated slate grey dial, and furthermore, the brown bezel has also been changed to a dark gray, almost black color. Apart from that, they are identical. Some could argue that the old Bronze Black Bay could get a little boring with its flat grey dial without much texture, and the Black Bay 79250BM certainly has a lot more character than the previous.
The shaded slate gray dial is quite subtle but still noticeable. The center of the dial has a lighter shade of grey that darkens to an almost black color around the edges. It’s safe to say that the new Black Bay Bronze 79250BA is more wearable than the previous. The previous bronze Black Bay with its bright brown color is a watch that stands out, and sometimes, it can be a bit difficult matching it with everyday clothing. The Black Bay 79250BA, on the other hand, is with its gray and dark colors, contrasted by the bronze case, a watch that will work quite well for a lot of occasions. 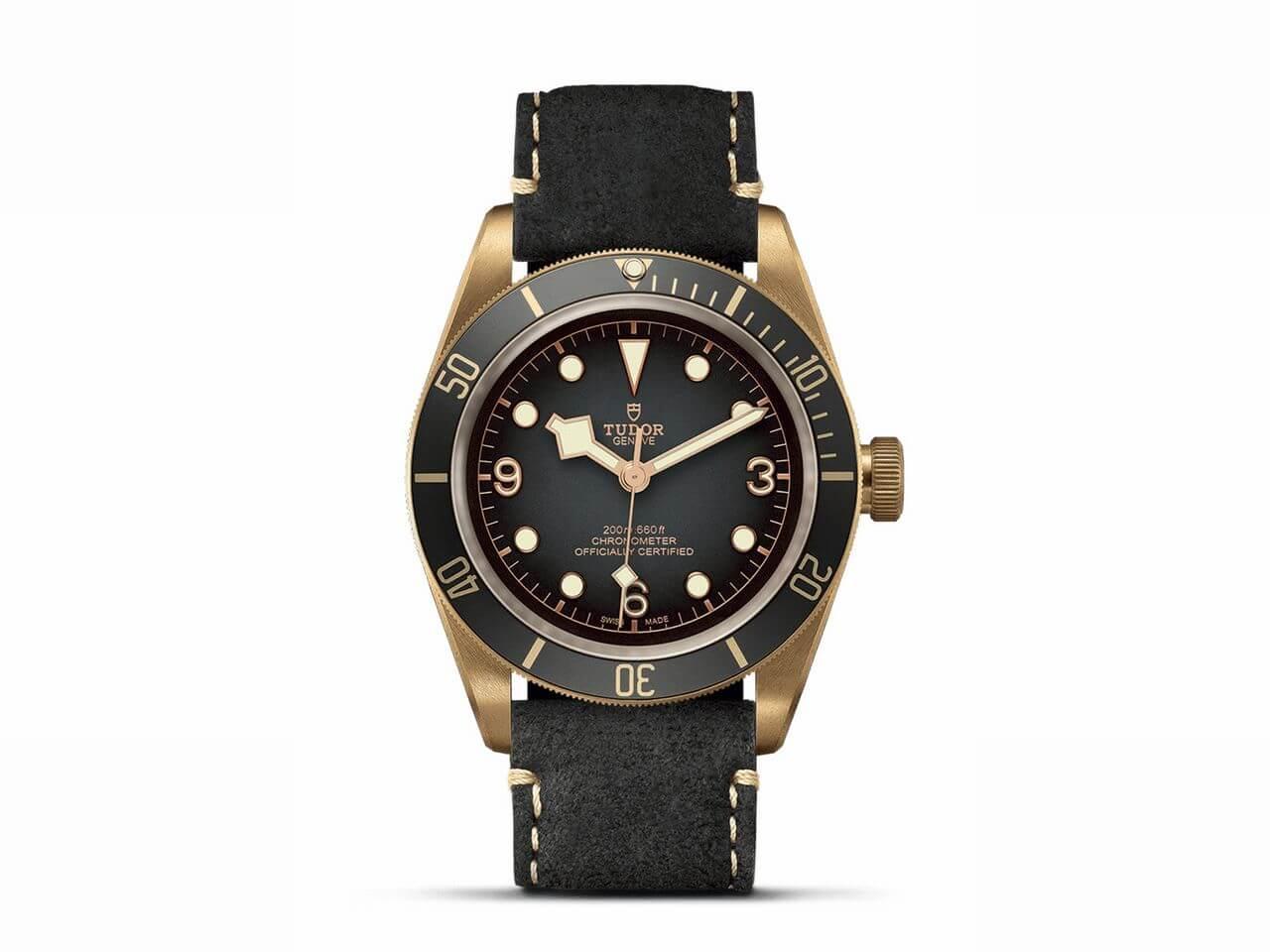 As mentioned, if you’re familiar with the previous 79250BM, you’ll be familiar with the Black Bay Bronze 79250BA. It has a unidirectional rotating bezel with a sixty-minute scale. The most iconic element of the Black Bay is probably the big crown without crown guards, as well as the snowflake hands, which allow for great legibility. What gives the bezel a unique personality is that it is matte, as this gives it different looks depending on the surrounding light.

What is different from the Bronze Tudor watches, compared to the rest of the Black Bay models, though, is that they have drilled lugs.

Apart from the gray slate dial, you have large indices. The indices have not changed from the previous model, however, the printing on the dial (rail around the dial) is in a slightly different color. On the dial, you can find 3, 6, 9 Arabic numerals on the dial. Between these, you’ll find circular indices, except for at 12 o’clock where you’ll find a triangular marker. All indices are applied. The hands are, as mentioned snowflake hands, and all of these elements contrast the slate grey dial perfectly. 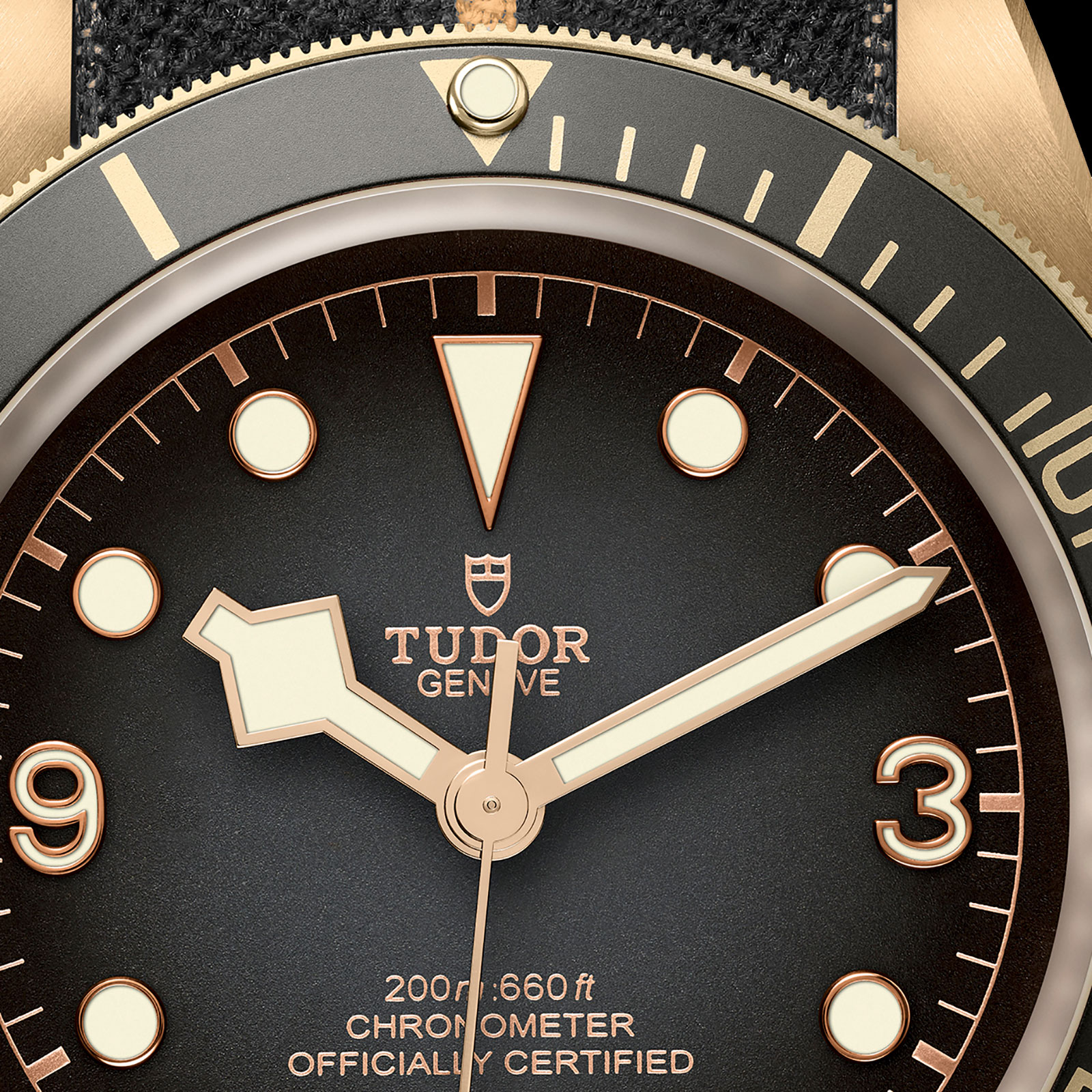 The case of the Black Bay 79250BA is 43mm, and yes, that is quite a hefty case. It is certainly the largest case in Tudor’s lineup of watches in writing moment.

The case is entirely satin brushed, which is different from the standard Black Bays which combine both polished and brushed elements. This also contributes to faster aging of the case.

The Black Bay Bronze 79250BA is, just like the predecessor, equipped with the Manufacture Calibre MT5601. This movement measures 33.8 millimeters and is the widest diameter of all Tudor’s calibers. It displays hours, minutes, and seconds, and has a 70-hour power reserve. As it is developed for a tool watch, it is built for robustness, longevity, and reliability – almost like the way Rolex makes their movements (surprise).

The movement is also certified as a chronometer by the Official Swiss Chronometer Testing Institute (COSC). The movement beats with a frequency of 28800 and has 25 jewels.

And Tudor has made a reference to its history with its fabric strap. Tudor identified the historic uses of its watches and reinterpreted. What Tudor found was that the French Navy had Tudor watches delivered without bracelets and then fitted them with their own straps. Looking in their archives, they found a Tudor watch that had a strap which had been made with elastic recovered from French rescue parachutes. 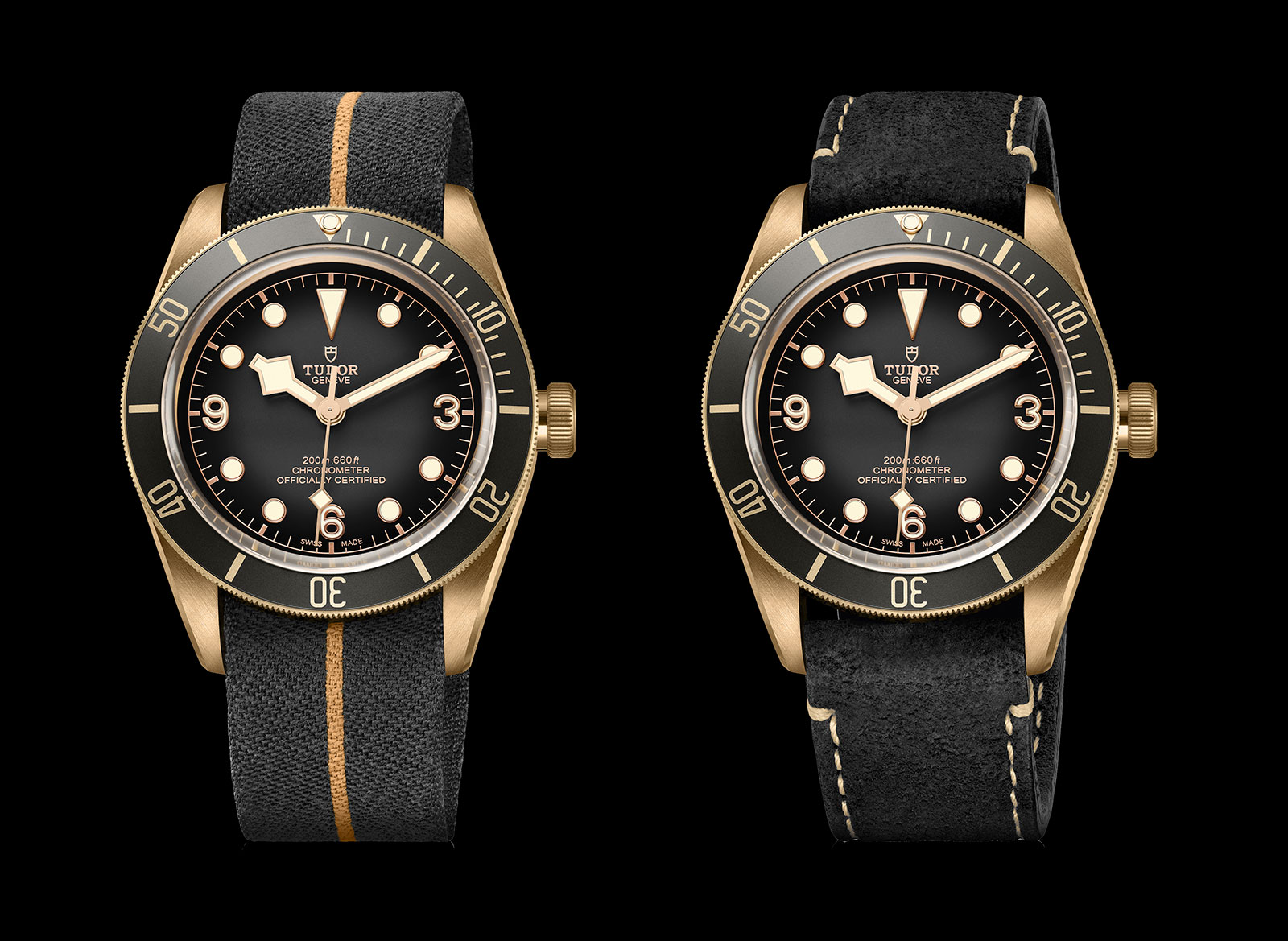 This strap worked as the inspiration for the fabric strap that is available to get on the 79250BA bronze watch, with a gold thread in the middle of the strap. If you prefer the letter strap, you can get the aged slate-grey leather strap with straight cut accentuates

The crystal is a standard Black Bay crystal, except it is larger. It is a sapphire crystal that is slightly domed to give it a bit of a vintage look.

The price remains unchanged from the 79250BM. This makes sense since it is essentially just the same watch only with a different color. The Black Bay Bronze 79250BA is priced at 3850 Swiss francs, and will be available starting April 2019.