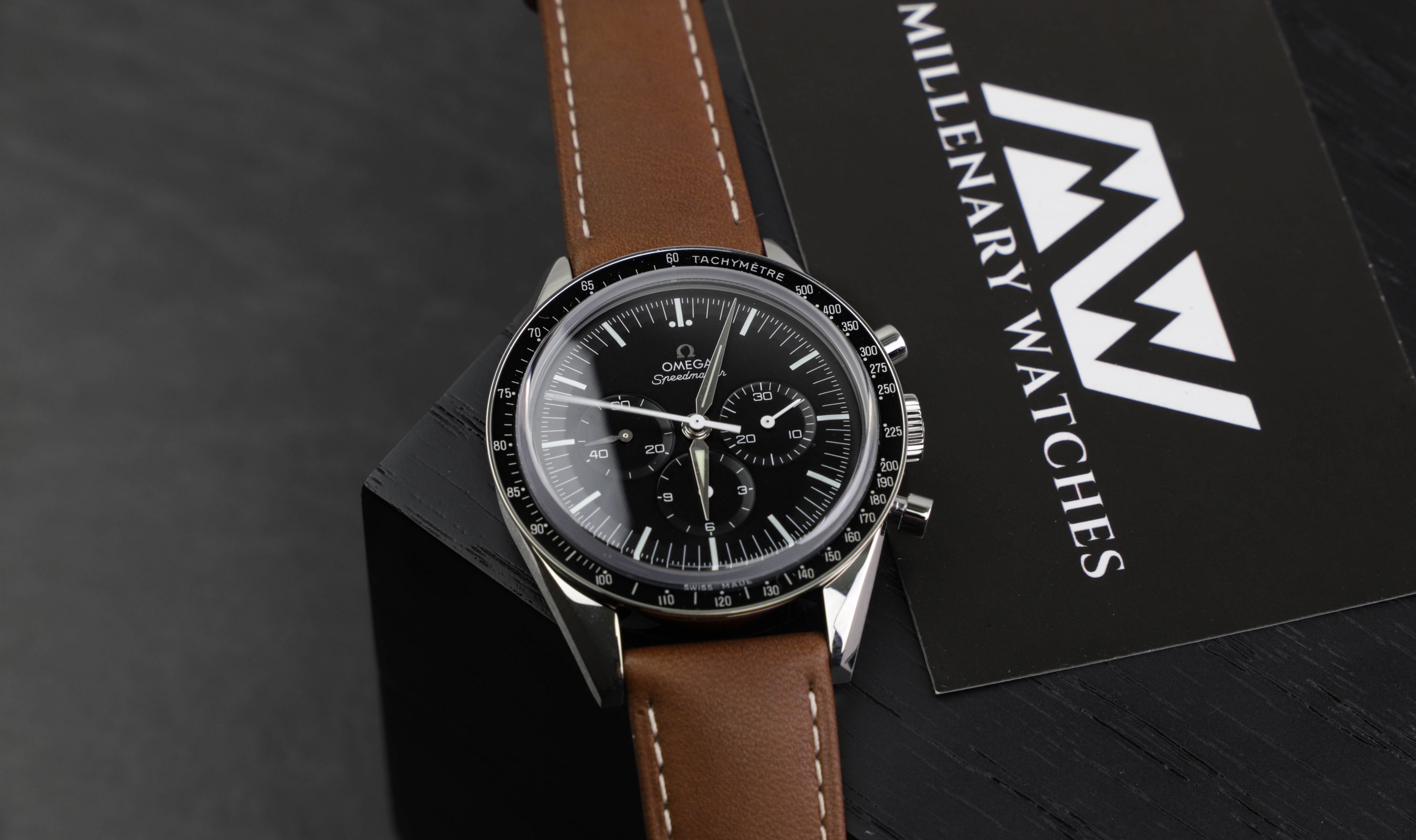 Most brands have a flagship model collection. The model that is instantly associated with the brand, which is often also a  model that has contributed greatly to the brand’s success.

In the case of Omega, that model is the Speedmaster. The Speedmaster model from Omega is unarguably the brand’s most legendary model. Its popularity grew substantially after it became the official watch of NASA, and eventually also worn on the moon in 1969. 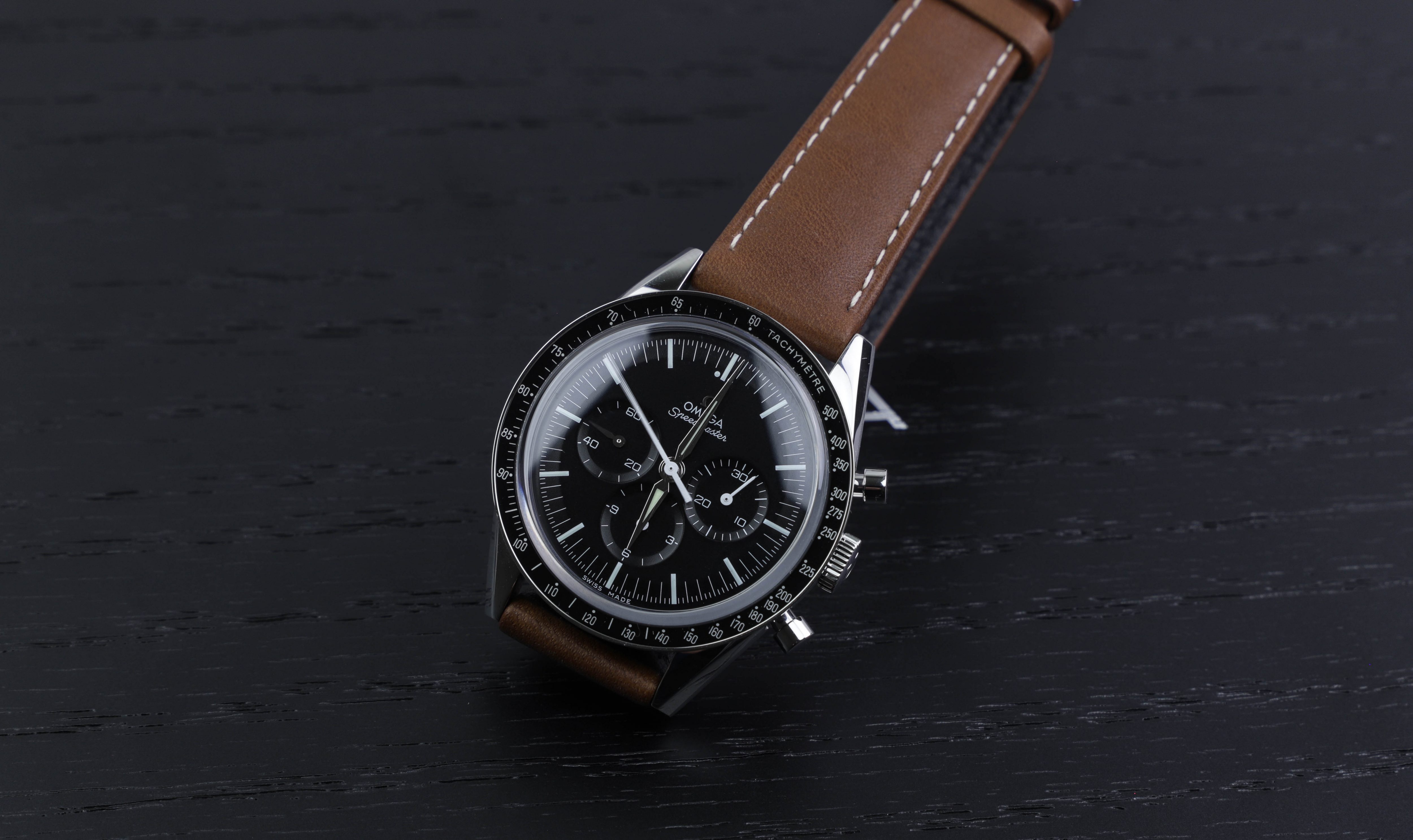 In this post, we are going to go in-depth on this model to understand what it is and why it exists.

The Omega Speedmaster FOIS was released in 2012 at Baselworld, and at the time of release, it was really something else from most other modern Speedmasters.

The name First Omega In Space reveals that this watch is a tribute to just that – the first Omega in space, and thus the beginning of a decade-long and legendary partnership between Omega and NASA. 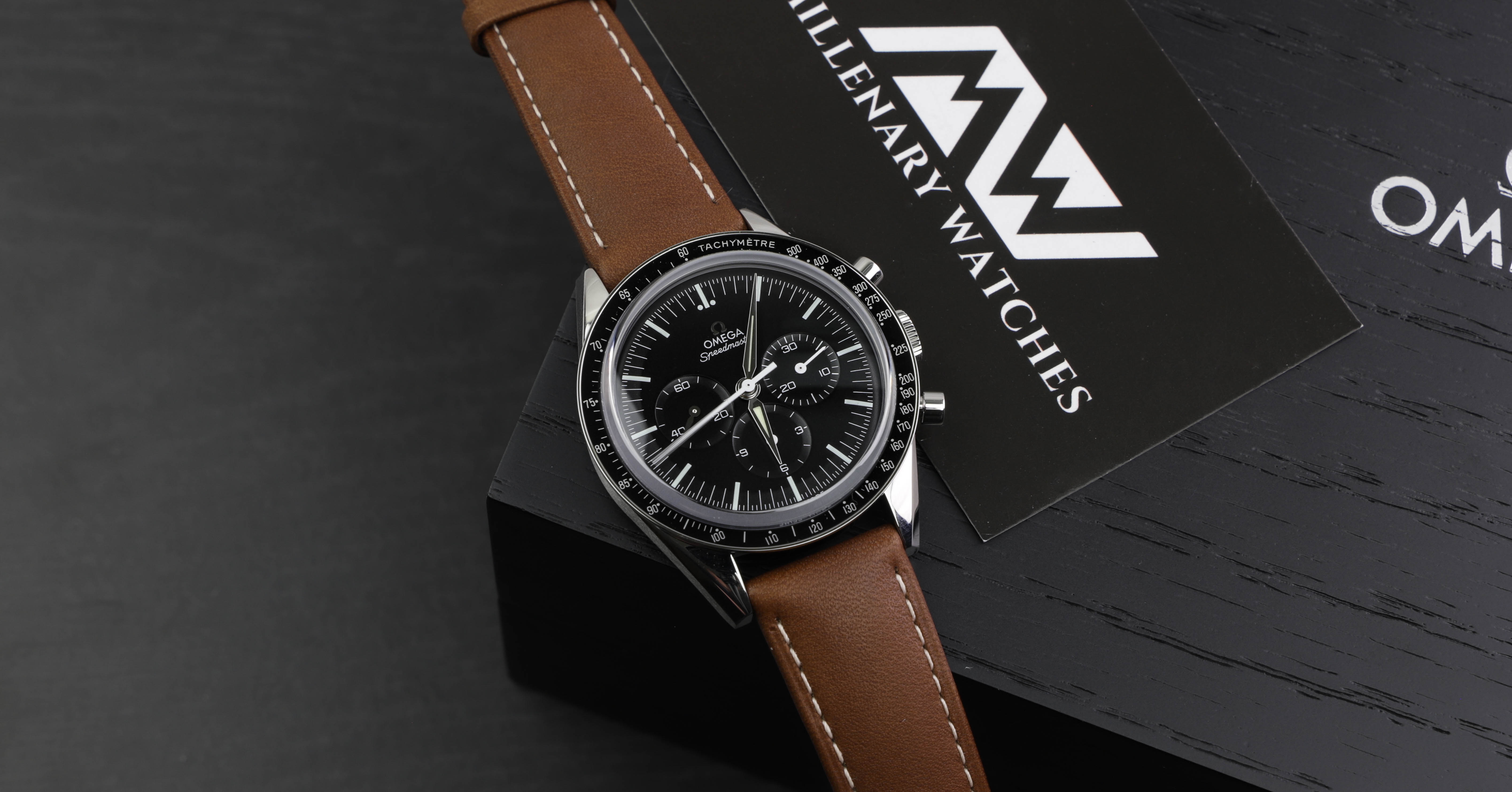 The first Omega in space was worn by Wally Schirra during his Mercury Atlas 8 mission in October of 1962. Of course, Schirra wore a Speedster. This watch is thus a tribute to Schirra and the Mercury Atlas 8 mission. The history goes that Schirra actually went to a jeweler in Houston to buy himself a watch. That watch was a Speedmaster.

”when astronaut Walter Schirra wore the watch during the ‘Sigma 7’ mission of the Mercury Programme in 1962. Schirra had purchased the watch for his own use, but two and a half years later, the Speedmaster would be officially certified by NASA for all manned-missions, launching it into history.”

The Speedmaster FOIS is a manual-winding chronograph powered by the Omega caliber 1861, also used in the iconic Speedmaster Moonwatch. It has a diameter of 39.7mm and is completely made in stainless steel. 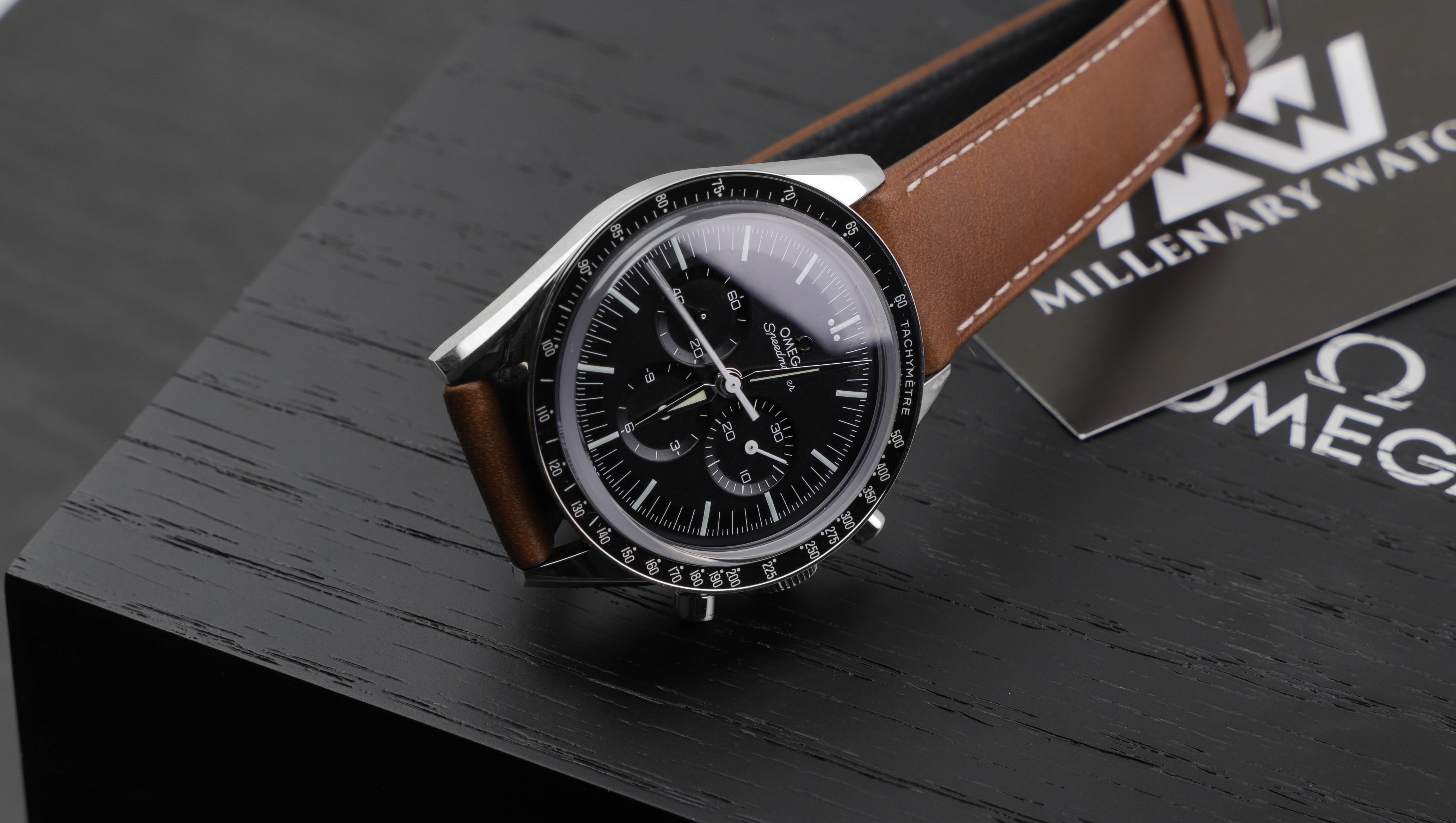 Unlike most other Speedmasters, the FOIS does not have the iconic wired lugs. Instead, it has straight lugs – which are inspired by the original Speedmaster that Schirra bought. The modern FOIS is more or less a re-edition of the Speedmaster that he bought (with the reference CK 2998).

If you put them side by side, it’s evident where Omega got the inspiration for the FOIS: 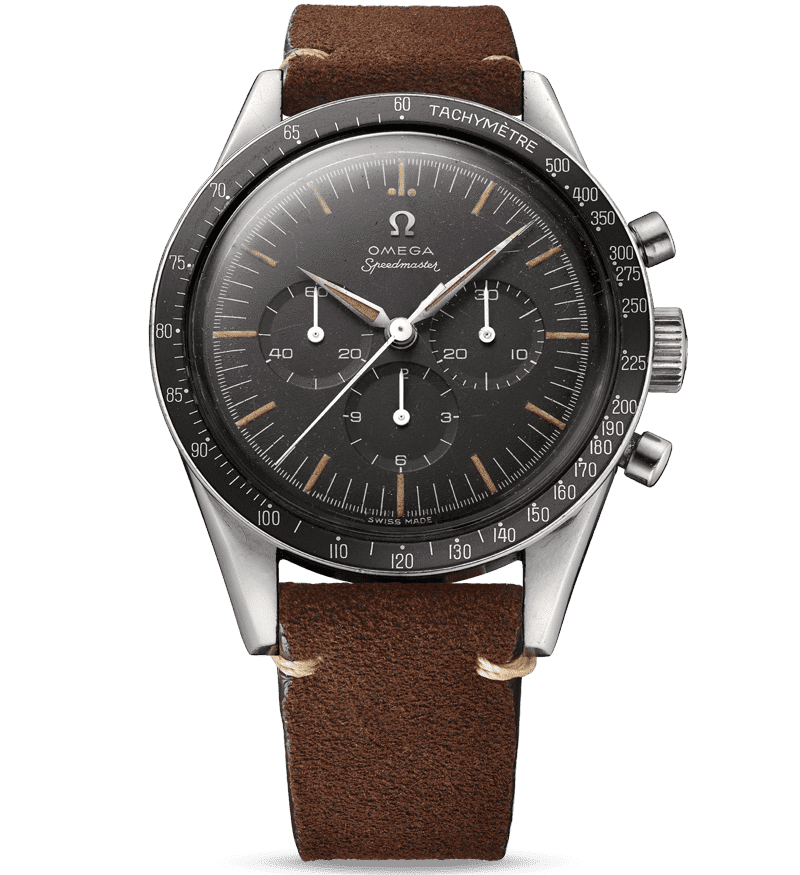 What is interesting about this is, of course, the fact that despite that the original is more than 60 years old, its design is still relevant today, proving it truly timeless.

Unlike many other Speedmasters which are ”tributes” to space missions, the FOIS is not a limited edition timepiece. Instead, the FOIS is part of Omega’s standard collection as a numbered edition. The number is engraved on the case back, together with an embossed Omega Seahorse emblem and the words ”THE FIRST OMEGA IN SPACE” and “OCTOBER 3, 1962”.  With that said, no-one knows when Omega will eventually discontinue it, or if Omega had decided how many pieces it would produce even at the release. 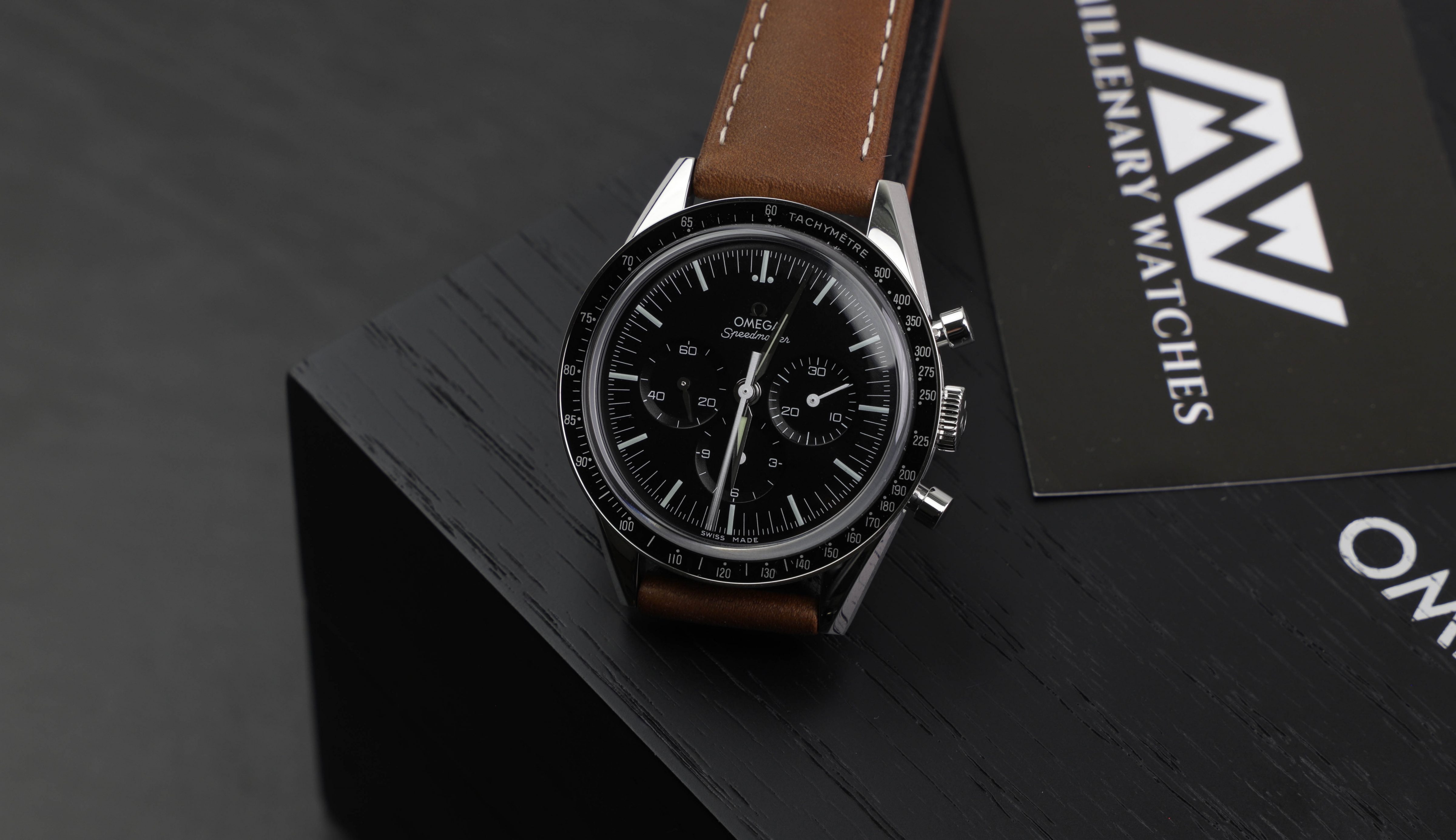 The Speedmaster FOIS has a water-resistance of 50 meters, 5 bar, or 167 feet. It is presented on a brown leather strap. Just like the original, it has a varnished black dial featuring three sub-seconds. A 30-minute recorder and 12-hour recorder. And of course, being a chronograph, it has a central chronograph that is to be used together with the tachymeter scale on the bezel.

A praised detail about the Speedmaster FOIS is that Omega decided to keep the leaf hands. Although not for all hands. For this model, Omega uses leaf hands for the hour, minute, and running seconds. Not for the Chronograph counters. This is different from the model that Schirra wore, on all of which sub-dials had straight hands.

At 12 o’clock, you will find an applied Omega logo. Bear in mind that this is a vintage-inspired watch, and thus the logo is made to look like the logo Omega used in the 1960s. The same goes for the ”OMEGA” printing beneath it.

To conclude, the Speedmaster FOIS is a vintage-inspired Speedmaster with a smaller size of 39.7mm. It stays true to the original watch from with it takes its inspiration from, but mixes that with modern technology and materials. This includes a durable sapphire crystal, Superluminova, and more. This watch is the best of both worlds as a vintage-inspired modern timepiece that has everything you would want in a Speedmaster.

The watch also comes delivered in a special edition wooden box where the Mercury Atlas 8 mission plaque is attached to the inside. 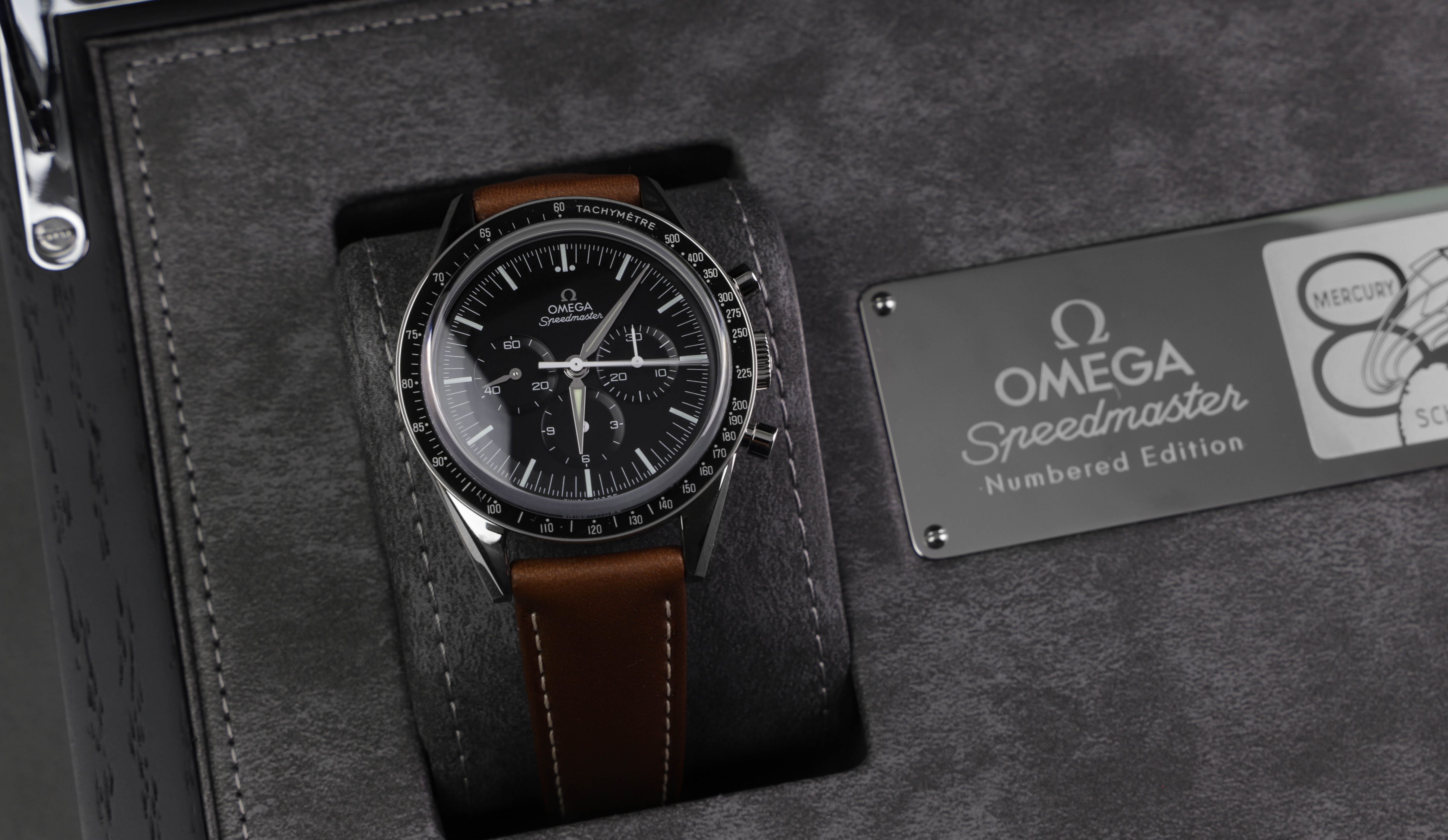 How many Speedmaster FOIS have been made?

Whilst Omega has not reported official production numbers of the FOIS, it is possible to get a rough idea of the total manufactured pieces by looking at their edition number. With this said, it has been confirmed that the last pieces delivered by Omega before being discontinued have been in the region of 15.0000. This means that over the years, Omega has manufactured around 15.000 Speedmaster FOIS.