Many of Rolex’s models are manufactured for years and years under the same reference, with no real visible change. This is mostly true to Rolex’s modern watches, as many of Rolex’s vintage watches have received notable updates during the course of its production without changing the reference number. Take, for example, the Submariner 14060 which changed from tritium to Luminova, to Superluminova, to having an engraved rehaut, to having both two and four lines of text. That is a lot of changes to a watch that kept the same reference number…

But many of Rolex’s watches receive updates and changes so small that they are barely visible to the untrained individual. And certainly too small for Rolex to update the reference number.

As you probably know, Rolex as a company is very conservative. But at the same time, they consistently strive for nothing but perfection. This means that they are always looking for ways to improve their watches, no matter how minor they may be. Most of the time, they are minor so that for most people, they are not even noticeable. And for more noticeable updates and changes, they demand a completely new reference.

In this article, we will talk about Submariner ceramic dials, and highlight how Rolex, during the production of the Submariner 116610 and 114060 has made minor changes to the dials. And for most people, these changes have gone unnoticed, so we hope this article can be eye-opening for you, regardless of how small these changes are.

While these small dial variations of the ceramic Submarinersaren’tt something that people consider today, who knows, in the future, they may affect which ”generation” of Submariner ceramic is more collectible. This is what makes this topic a whole lot more interesting.

While the variations are not as big as many vintage watches such as feet first or meters first, it’s the small details that collectors look at. But what the future holds, we have to wait and see.

Because Rolex has not publicly mentioned these small variants in the dials, it makes things a lot more interesting, as we as collectors have to do our research among the production years, and try to circle in when in the production of these changes took place. With that in mind, please understand this resource is in no way meant to be a complete guide.

Seeing that it has passed more than a decade since most of the Submariner watches were released, these watches have had a long production period, without any official changes to them. But obviously, Rolex has changed a lot in its manufacturing process during this decade, and as a result, this has lead to small differences between them, depending on when they were made. Let’s look at some of these differences, with a focus on the dials.

Obviously, these small dial variations will have different years as the year of manufacture does not necessarily have to be the same year they were sold. The fact that Rolex uses random serial numbers makes it impossible to say a clear-cut time period when each of these dial variations and changes were implemented. So please note that the dial variations and the respective years of the Submariners below is not the case for all Submariners, and differences exist between Submariners that have the same year written on the warranty card. See this article more so as a highlight of the dial differences, although clear differences exist between the very early Submariner ceramic and 2019/2020 Submariner ceramic.

Let’s start with the Submariner 116610LN – the most classic and iconic Submariner: 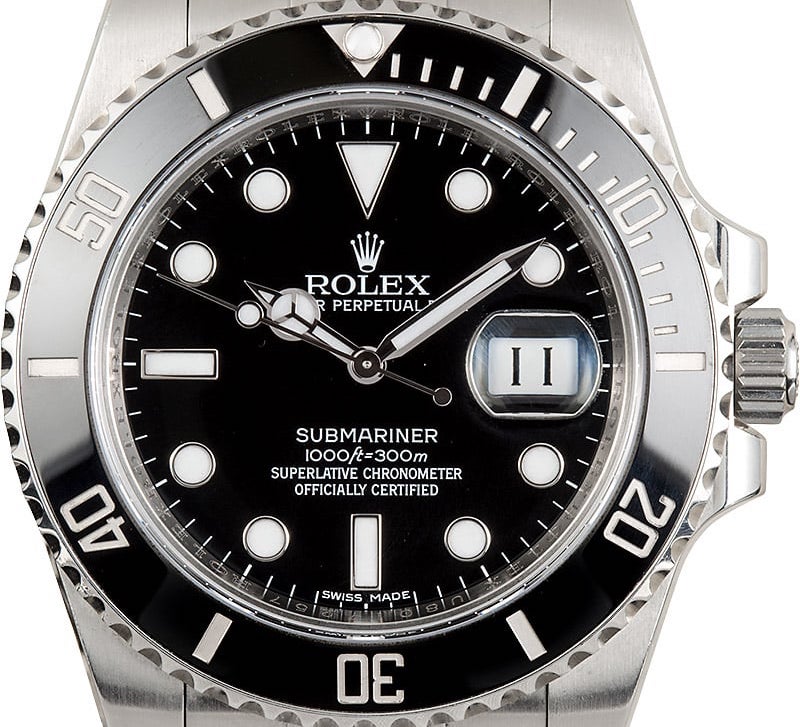 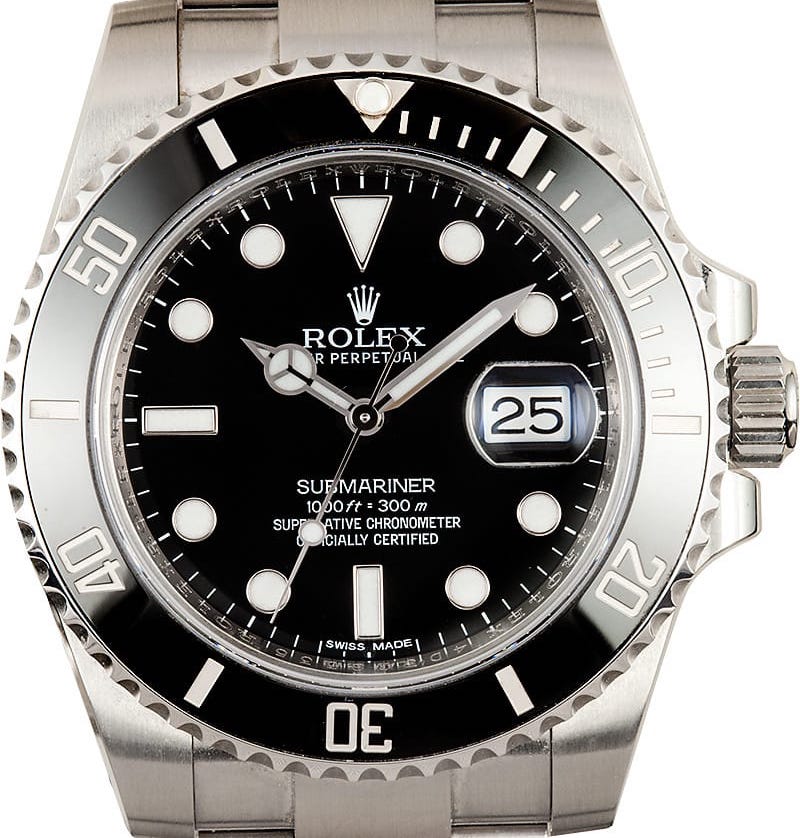 As you can see when comparing these two images, these two watches have small yet noticeable differences in dial printing. 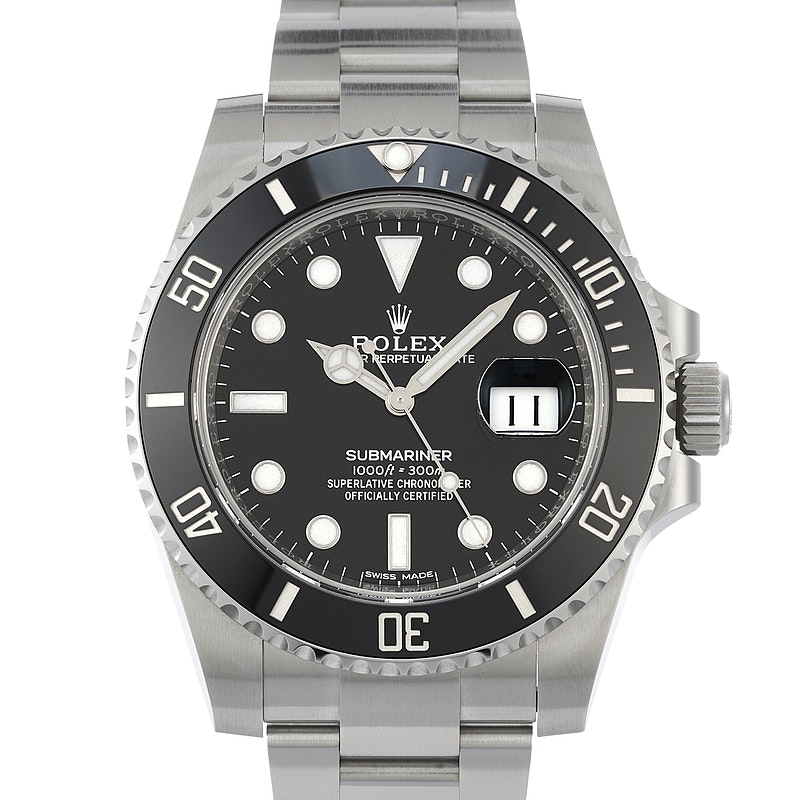 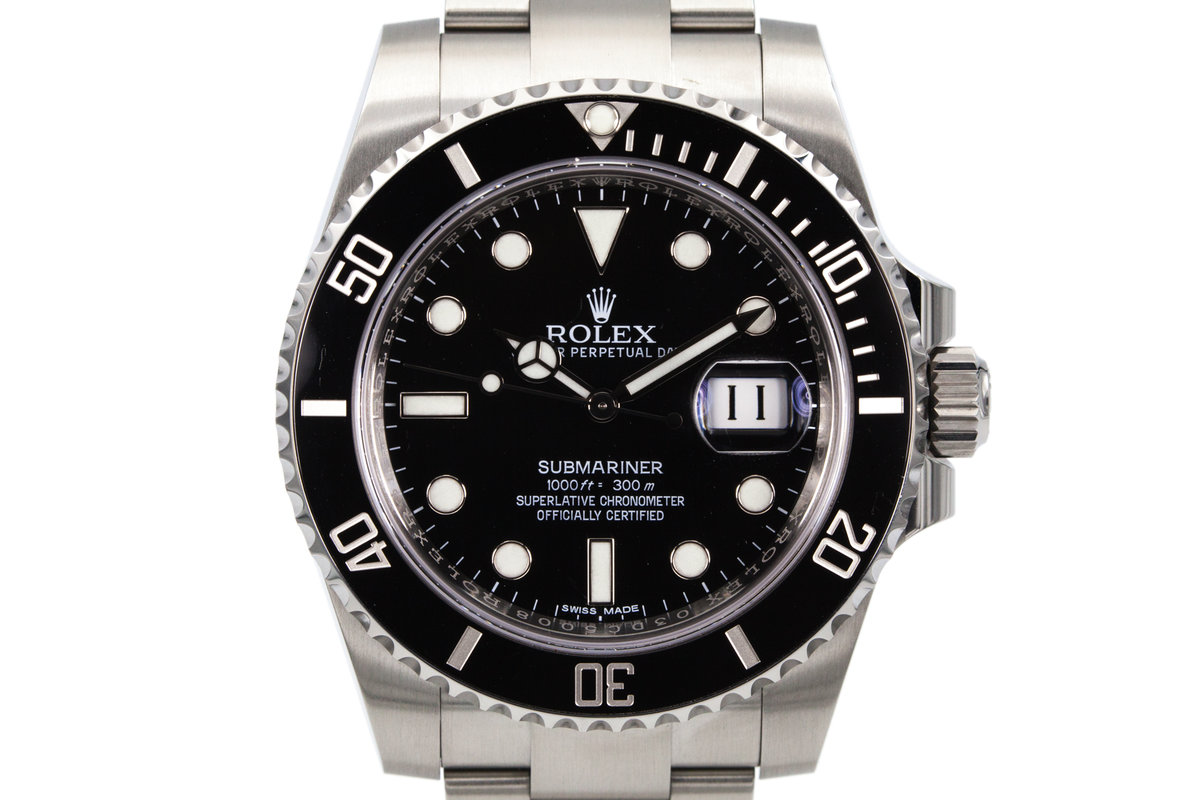 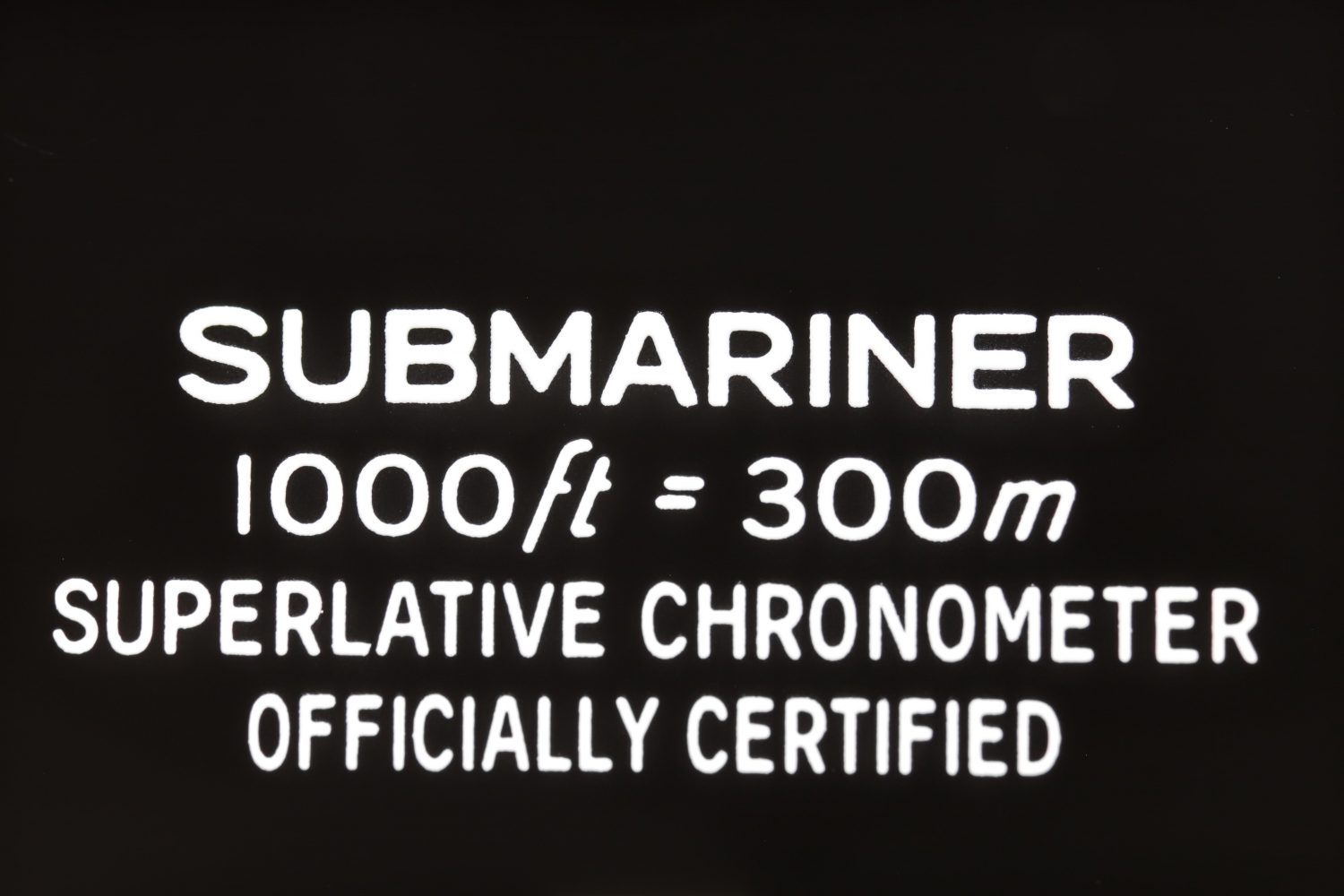 We have noted that 2018 versions have both fat and thin printing, which is interesting. But this is most certainly the case for the other dial versions and years in this article as well. See the two images below of two 2018 Submariners as reference: 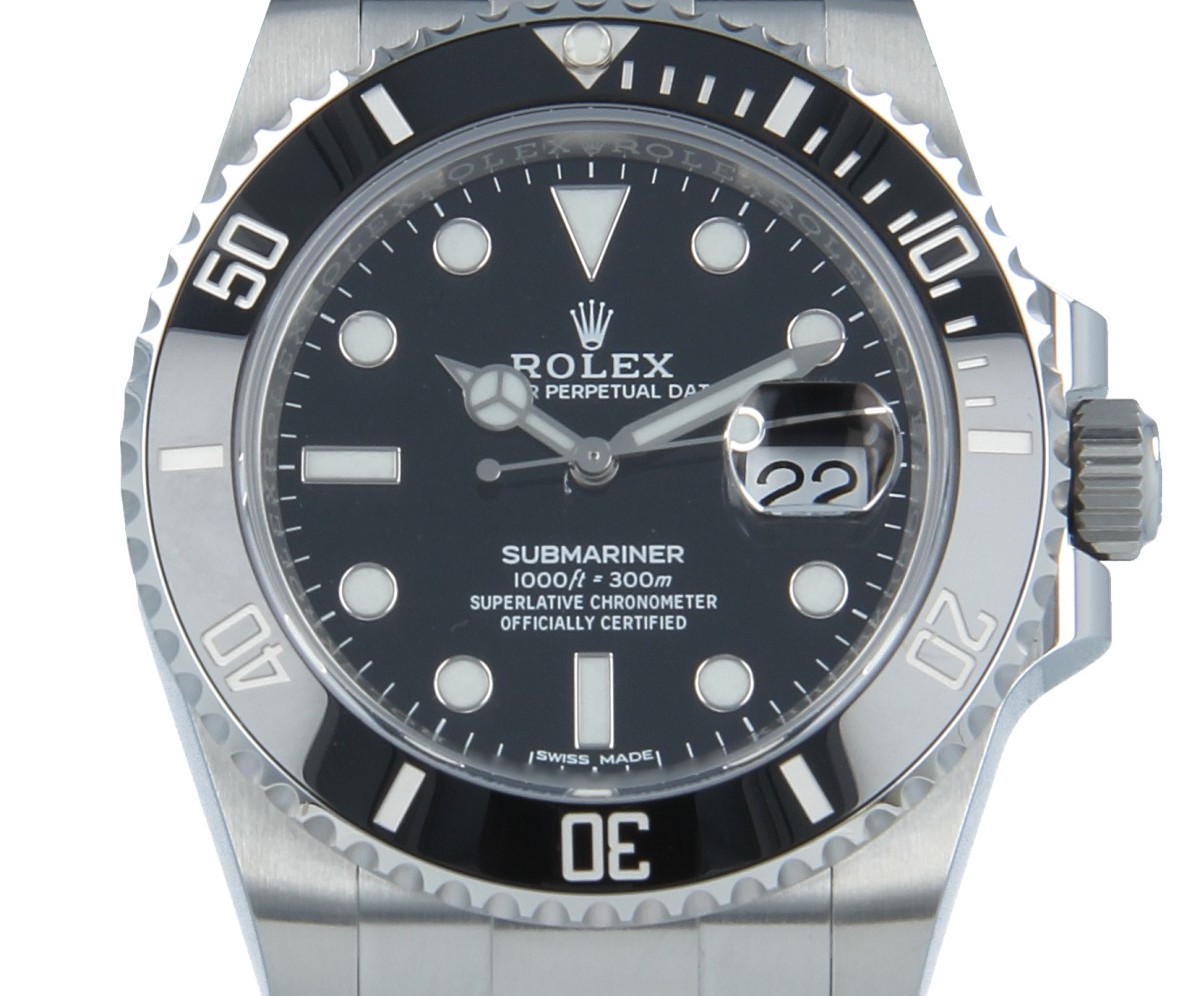 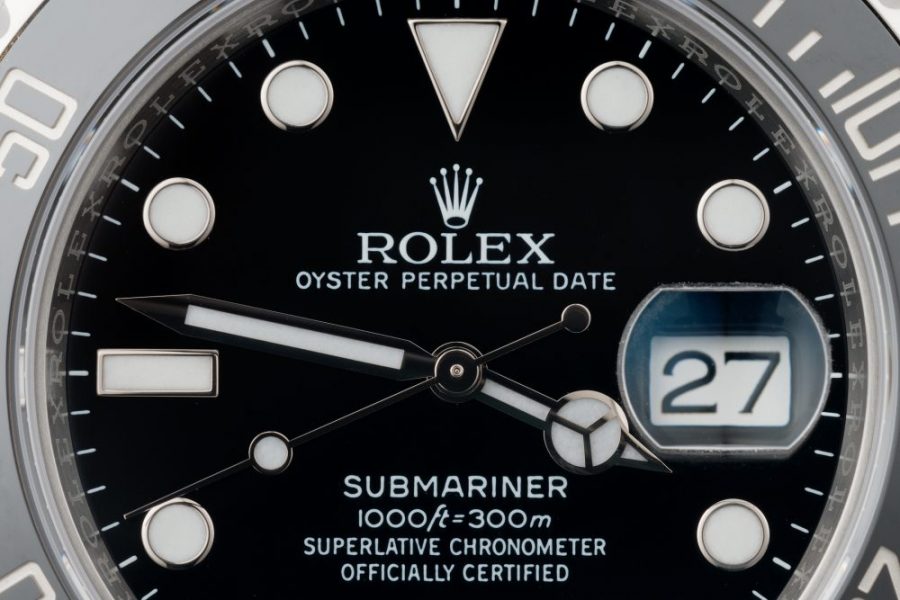 As you can see, there is a distinct difference between these two.

Most notable differences between the ceramic dial variants

As you can see from the examples above, there are some elements of the dials that have the biggest differences.

These differences also apply to the rest of the Submariner references other than the 116610LN.

Another dial variation is the date window.

On some dial variations, the date window has a frame, whilst others don’t. See the reference images: 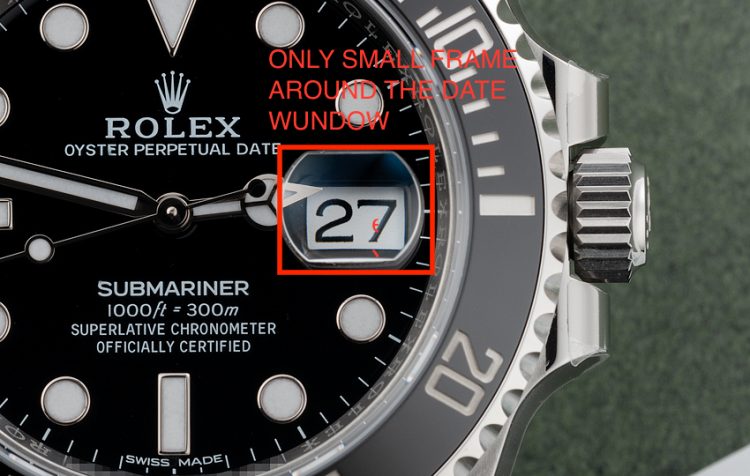 Rolex has not gone official with any of these small dial variations. The changes are simply too small to demand a new reference number, and thus, Rolex continues its production. Having in mind that the Submariner ceramic has been in production for more than a decade, you can expect that things have changed in the way they make their watches.  The most logical explanation of these differences has to do with the retooling of printing pads during production. However, as Rolex has made changes to the dials that are not affected by the printing pads, some of these variations are absolutely conscious changes. This includes, for example, the font of the print, the space between ft = 300m, the space between 300 and m. And more.

There are some theories that Rolex does this to combat counterfeiters, however, others argue that the more variety in the dial, the more difficult it would be to identify a fake Rolex Submariner.

What is most notable is that most official retailers are not aware of these variations, which, ultimately, can cause them to mistake a watch for being fake when that is not the case.