The Tag Heuer calibre 5 is a movement (caliber) used by Tag Heuer for a large number of watches. In fact, it may very well be TAG’s most well-known caliber. TAG Has several different variations of the Calibre 5. It is one of TAG’s go-to flagship movements. 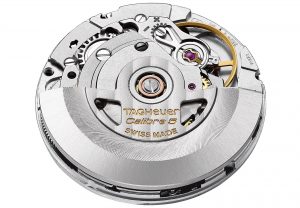 In terms of functions, it displays hours, minutes, seconds, and the date. It has a diameter of 25.6mm. Inside the movement are 25 jewels. The Sellita has 26 jewels.

The movement is Swiss made. It cannot, however, be called an in-house movement.

Depending on the version, the calibre 5 can be decorated differently.  Some versions have ”Côtes de Genève”, but all versions are engraved “TAG Heuer — Calibre 5 — Swiss Made”.

How accurate is the Tag Heuer calibre 5? To begin with, it is, in general, not a COSC certified movement.

There are, however, variations of the Calibre 5 that are COSC certified, including the movement for the Autavia calibre 5. This means an average daily rate on the first 10 days of testing: from -4 sec to +6 sec.