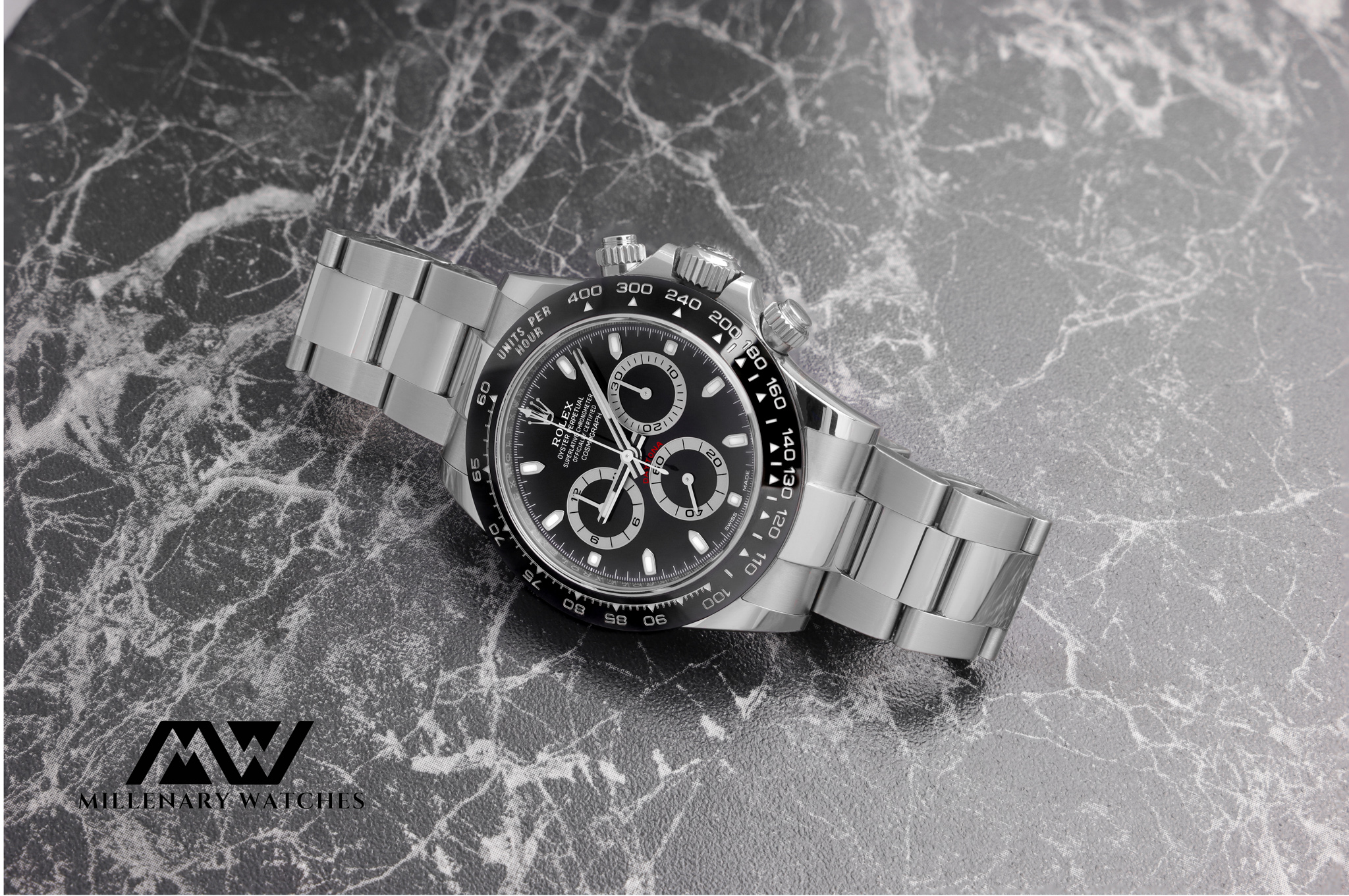 32 Most Interesting Facts About Rolex Daytona

Rolex is undeniably the most famous and iconic watch brand of this era. It has established itself as the ultimate luxury watchmaker, separating itself so much from its competitors that it is the natural choice for customers looking to buy a luxury timepiece. Rolex is closely associated with high quality and precision, and over the years, it has made a number of important advancements and inventions that have helped establish Rolex and also influenced the whole match industry.

One of the most iconic watch models ever made by Rolex is the Rolex Daytona.  It is not the most famous of Rolex models, but it has still been able to make a reputation for itself and become a popular timepiece in Rolex’s lineup of models.

In this article, we’re listing the top 32 most interesting facts about Rolex Daytona.

1. The Rolex Daytona was originally the least popular Rolex model

Would you believe it? Today, the Rolex Daytona is one of the most admired and loved Rolex watches, and this can be seen in the money that vintage Rolex Daytona watches are selling for today. The Rolex Daytona was so unpopular that rumors have it that Rolex considered stopping their production of them. The contrast is huge and just goes to show how things can quickly change when it comes to what people want.

2. In the 70s, the Daytonas was sold for less than one thousand dollars

Of course, this is not accounting for inflation, however, even when including inflation in the equation, the price of the Rolex Daytona has increased many folds over the years.

Today, Rolex uses in-house movements for all of its Daytona models, but that hasn’t always been the case. In fact, it would take until the year 2000 when Rolex started producing the in-house caliber 4130. for the Daytona.

Before this, the Rolex Daytona watch had been powered by movements based on the movements manufactured by Valjoux and Zenith.

4. The Rolex Daytona has been manufactured by Rolex since 1963

The history of the Rolex Daytona is quite long, often longer than many think.

5. Three series of the Cosmograph Daytona have existed

The three series are:

6. The second series of the Rolex Daytona featured a Zenith movement

The Rolex Zenith Daytona has today become somewhat of an icon, especially as it is the last Rolex watch to use a non-in-house movement.

The Daytona used a modified Zenith “El Primero” automatic winding movement. This movement was originally released in 1969 and is acknowledged still to this very day as the highest VPH (vibrations per hour) mass-produced movement on the market, beating at 36,000 VPH. Rolex purchased these movements for its Daytona and modified it according to their preference. They made the movement into 28,800VPH from 36,000VPH and made a few other tweaks.

7. The third series was a new era of the Daytona with an in-house movement

Introduced in 2000, these came to become the first Daytona watches with in-house movements entirely made by Rolex.

8. Rolex used the Caliber 4130 for its new in-house Daytonas

For the first time in history, Rolex now used in-house movement in their timepieces, and the Caliber 4130 is a movement that is still used today.

The movement has 44 jewels and a 72-hour power reserve. It also has Kif shock absorbers for its balance and escape wheel.

The movement has vertical coupling which enables a smooth start for the elapsed-seconds hand. Furthermore, the new in-house movement has column-wheel switching.

9. Rolex began making a version of the Daytona with a bezel made of cerachrom

This bezel was already available on the Rolex Submariner and GMT II, but now, it was introduced for the Daytona. Today, many of the Rolex Daytona watches feature Cerachrom bezels.

10. Cosmograph means measurement of the universe

Eventually, Rolex started using the Cosmograph name for its Daytona watches, which are today known as Cosmograph Daytona.

In case you are unsure about the feature of the Rolex Daytona and what it can do, the tachymetric scale allows drivers to measure average speeds up to 400 kilometers or miles per hour.

As their first chronograph, this can be seen as the first Daytona, even though the name couldn’t be found on the dial. Instead, on the dial, it said “Chronograph”.

This helped protect the watch and make it resist water.

14. The Rolex Daytona got its name from the 24 hours of Daytona race

Rolex sponsored the 24 Hours of Daytona car race, and this event eventually became known as Rolex 24 at Daytona in 1991.

As a tribute, Rolex named its race chronograph after the Race to the Rolex Daytona.

The actor Paul Newman was an avid wearer of a Rolex Daytona reference 6239. It was thanks to Paul Newman that the watch became more sought-after and popularised, and soon thereafter, prices for the ”Paul Newman” Daytona flew through the roof. After collectors started seeing Newman wearing the watch, they gave the Daytona Model the nickname ”Paul Newman Daytona”. One thing is for sure: if it wasn’t for Paul Newman, the Daytona wouldn’t be as popular and have the status it is today. Newman was given the Daytona by his wife Joanne Woodward as he started automobile racing.

Some of the Rolex Daytona references have received the nickname ”Paul Newman” after Paul Newman was seen wearing one many times, and when the ”Paul Newman” actually belonged to Paul Newman, the man from which the watch had received its nickname, came to auction, bidders were crazy about its historical and iconic value.

The price of US$ 17.75 million makes it the most expensive wristwatch ever sold. The most interesting part is that when Paul Newman gave the watch away to the then-boyfriend of his daughter, the watch was selling for about $200.

James Cox has donated a significant portion of the sale price to the Nell Newman Foundation.

17. The rarest Daytonas are the first versions with four-digit numbers

These reference Daytonas hold the design traits which the iconic ”Paul Newman” Daytona is known for.

19. The Paul Newman Daytona went out of production in the early 1970s

Rolex does not supply any replacement version of it.

Tropical Daytonas are in essence watches with discoloration on the dial, and while you’d think that because of that, the prices would go, lower, it’s actually the opposite.

The tropical dials are caused by a defect in the manufacturing process, and because of this, the number of watches that have tropical dials is highly limited, at the same time as the demand is high.

The Rolex Daytona was released many decades ago, and today, it is one of the most popular and desirable pieces within the Rolex watch range. It is loved by watch Passionists and Rolex lovers alike, and it has played an important role in Rolex’s own history. These facts about Rolex Daytona show that Rolex Daytona has had many important moments in Rolex’s history, and has contributed to the brand’s reputation.

Which of these facts about Rolex Daytona did you find the most interesting?