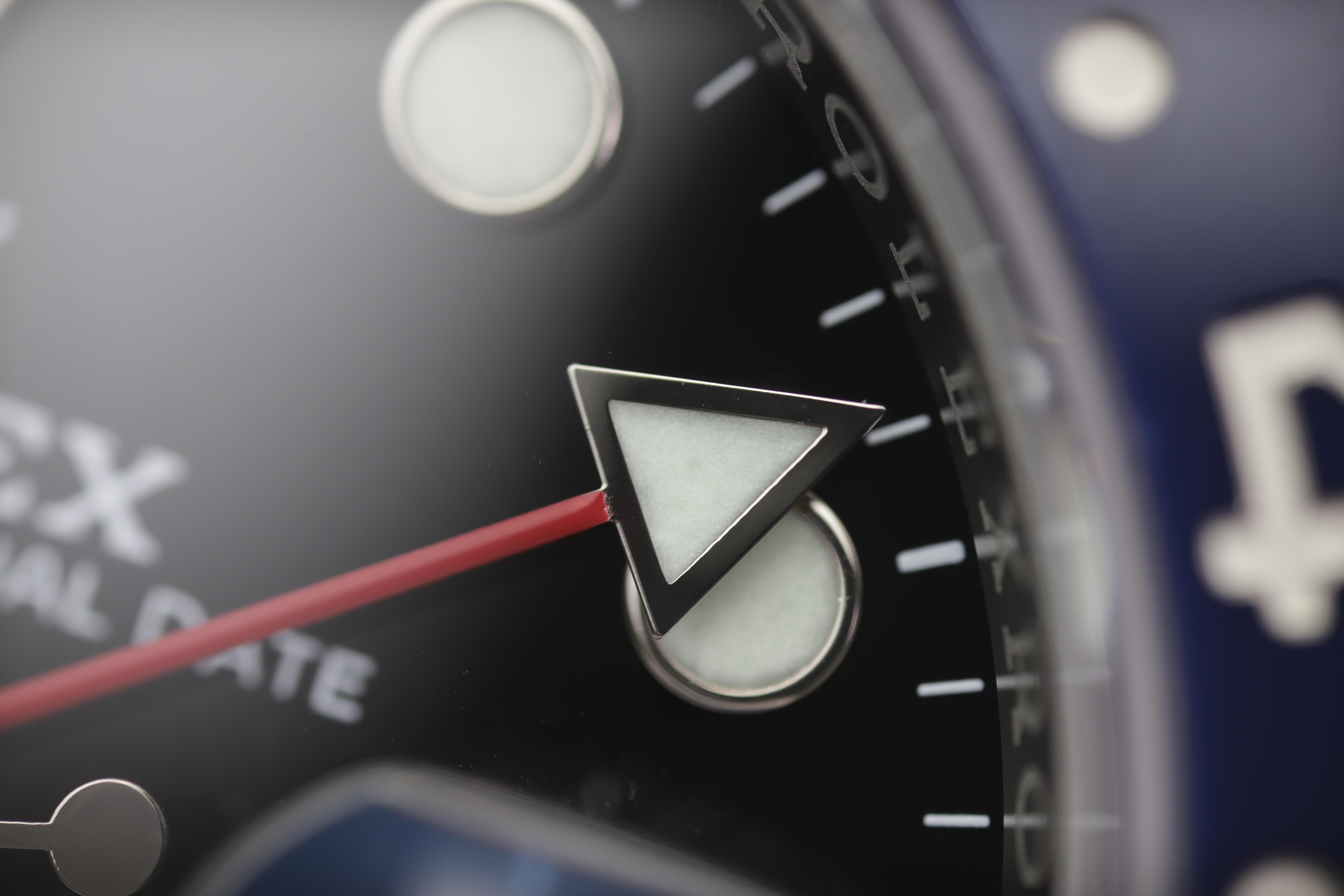 20 Most Interesting facts about the Rolex GMT-Master (II)

The GMT-Master is one of Rolex’s most popular models. The watch that features an additional hour hand that enables you to keep track of multiple timezones simultaneously first started out as the GMT-Master, and was then updated to the new GMT-Master II model.

This watch has a legendary and interesting history of being a tool watch, specially developed for airline pilots who flew across timezones. Today, it is an appreciated timepiece amongst collectors as well as enthusiasts. In this post, we share top facts about the Rolex GMT-Master and the GMT-Master II that you may not know about.

1. The GMT-Master was developed at the request of Pan American Airways

As the industry for commercial flights took off, planes started flying across timezones. Pan American Airways, one of the most legendary and established airlines at the time approached Rolex to develop a watch for their pilots and navigators. The request from PanAm was that Rolex developed a wristwatch that could enable the wearer to keep track of two timezones simultaneously. Rolex resounded to the company’s request, and born was the GMT-Master.

Rolex released the first GMT-Master in 1954 at the request of Panam. This watch carried the reference number 1954.

3. The first GMT-Master was radioactive

It’s true! The first GMT-Master came with a bakelite bezel inlay with 24-hour numerals. The bezel inlay was made in bakelite in order to be able to incorporate a luminous material inside for the markers, so the wearer could read them even in low-lit conditions (such as in the cockpit). The luminous material used was uranium – a material that is highly radioactive.

4. The first GMT-Master was recalled in the USA

This is a very interesting fact about the GMT-Master that not a lot of people are aware about. The GMT-Master was recalled as a result of its radioactive bezel.

Concerns regarding the radium used were also raised, and the US after the Atomic Energy Commission found that the watch had too high levels of radioactive radiation.

As a result of this,  Rolex made a press release where they recalled all of the 605 Bakelite GMT-Masters that had been exported to the United States of America.

As seen in the press released below, Rolex offered to replace the bezels free of charge. 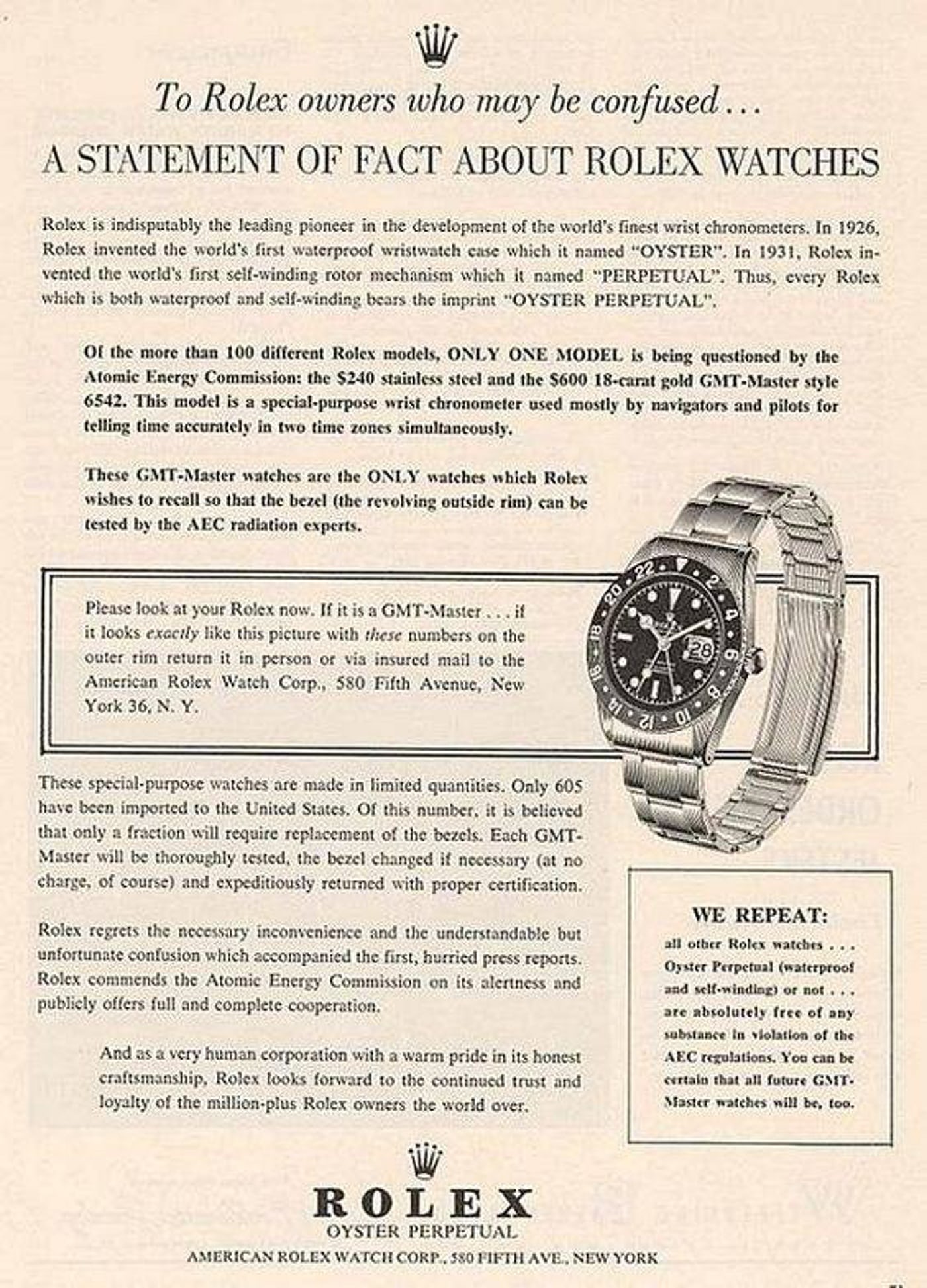 5.The now-iconic GMT-Master with black and red bezel was first released in 1982

The watch that has now become known as the ”coke” was released in 1982. This watch featured a black and red aluminum bezel insert.

6. The GMT-Master II 126710BLRO had 10 patent applications filed over the course of its development

7. A Rolex GMT-Master was worn in the James Bond Movie ”Goldfinger”

In 1964, the actress Honor Blackman, playing the character Pussy Glore wore a GMT-Master reference 6542. This has resulted in the watch acquiring the nickname ”Pussy Galore”.

Previously, the model was called only ”GMT-Master”. With the introduction of the reference 16760, the model name was now changed to ”GMT-Master II”.

10. The bakelite (plastic) bezel was replaced after two years of production

The main idea of the bakelite bezel was, as mentioned, to be able to incorporate radium in order to make the markers luminous. But plastic, as you know, is prone to cracking. This, together with the fact that it was radioactive, caused Rolex to replace the bakelite bezel two years later, in 1956, to an aluminum one instead.

11. Rolex first introduced the ceramic bezel for the GMT-Master II in 2005

The first GMT-Master II watch to feature the ceramic bezel was the full gold reference 116718.

12. The 116710BLNR was the first GMT-Master II to feature a bi-colored ceramic bezel

The 116710BLNR was the first GMT-Master II watch to have a bi-colored ceramic bezel, released in 2013. Prior to this, Rolex had only made the ceramic bezel in one single color – black.

The reason Rolex had not made them in a bi-color earlier (it does have a benefit, which is that it enables the wearer to distinguish between night and day more easily), was that the technique for doing so was so advanced, and hadn’t been developed yet. But in 2013, Rolex had finally cracked the code.

Greenwich Mean Time is also known as Coordinated Universal Time. This is the time zone that is used for all aviation planning, weather forecasts, and schedules, and more.

15. The applied indices of the modern GMT-Master Its are made in 18ct gold

Both the steel version and gold versions have indices made in 18ct gold. For steel watches, they are made in white gold.

The first GMT-Master reference 6542 had a 38mm case. All other GMT-Master models have a 40mm case.

17. The first GMT-Master was in production for 5 years but used 3 different movements

18. In 1971, Rolex introduced the hacking seconds function to the GMT-Master

The hacking function makes the seconds hand stop when the crown is pulled out. This allows for more accurate time-setting.

19. The reference 1675 is the longest production GMT-Master

The reference 1675 was introduced in 1959 and was in production until 1980. This makes it the longest-running GMT-Master in Rolex’s history. Over the course of the production period, many changes, upgrades, and refinements were made. This means that it is possible to find 1675s with many different subtle differences on the dial. Some of which are highly collectible.

20. In 1988, Rolex introduced the sapphire crystal to the GMT-Master

Previously, Rolex had only used acrylic crystals for the GMT-Master, but now, Rolex introduced the very scratch-resistant sapphire crystals.