Omega Calibre 321 – The Rebirth of an Icon

The Omega calibre 321 is unarguably the most legendary movement from Omega. In 2019, Omega announced the rebirth of its iconic 321 calibre.

In an announcement, Omega stated:

”If you ask most watch fans to name a famous movement they’d like to see reborn, you’re bound to hear them mention the OMEGA Calibre 321. This robust and elegant chronograph movement has been a favorite since the 1940s and is still highly sought-after by watch collectors around the world. Now, more than 50 years after the last Calibre 321 was produced, OMEGA is bringing the iconic movement back.”

The reintroduction of the Caliber 321 was not a completely unexpected step for Omega to take, but it is one that has been met with a lot of praise – and for good reasons.

In this article, we will go through everything you need to know about the iconic Omega caliber 321, its background and history, and what makes it so important for the brand.

History of the Omega caliber 321

On the 50th anniversary of the Apollo 11 lunar landing, Omega unveiled the first Speedmaster Moonwatch to be fitted with the relaunched legendary 321 caliber. Whilst Omega only announced one timepiece with the new movement, the brand is bound to release more Speedmaster versions with this caliber.

For the first version with this movement, though, Omega has, for obvious reasons made a rather exclusive first release – a Speedmaster made in full platinum, that naturally comes with a pretty hefty price tag.

The original Omega caliber 321 was the first movement ever used in the OMEGA Speedmaster in 1957. It was the movement that was used in a number of space-bound Speedmaster models that actually went to the moon. Much of the iconic status the 321 has gotten is thanks to Omega’s relationship with NASA and space. This relationship officially started in 1965. This year, it was on the wrists of Virgil “Gus” Grissom and John Young during their Gemini 3 mission.

Neil Armstrong was the first person to walk on the moon’s surface, it was his partner Buzz Aldrin, accompanying Armstrong on the moonwalk, who wore the Speedmaster Professional during this historic moment. Ever since this event, the Speedmaster has been known as the Moonwatch. This is, as you know, something that Omega has heavily promoted in their marketing ever since.

In 1968, the production of the 321 ceased and went into a more than five-decade hibernation – until 2019 when Omega finally announced the big news of bringing it back.

The Omega caliber 321, derived from the caliber 27 CHRO C12, which was a chronograph, with a 12-hour recorder, developed in 1942. The most famous variation of this caliber is, as you can guess, the caliber 321 chronograph movement.

Apart from being used on the moon, the caliber was used in the very first Speedmaster wristwatch, reference 2915. The caliber later joined Walter “Wally” Schirra’s, onboard Mercury-Atlas 8, in 1962.

So how did Omega come to become the selected official watch for NASA and the space missions?

There are rumors that Ragan, a person working for NASA at the time went to local jewelers to buy watches, but  In a 2015 interview with Ragan he said the story is false. Since NASA is a government organization, purchases need to go through a formal process. The actual truth is that he directed someone at NASA to send out a request for proposal to watch companies. This was a blind request and the watch companies did not know how the timepieces were going to be used.

NASA received four bids from watch companies. One brand was instantly filtered out as the fourth watch was too big. At the time, NASA had 10 different strict tests. NASA wanted to see how the watches performed under a variety of conditions, including extreme heat and cold, high oxygen environments, high humidity, different variations in G-force conditions, and high decibel environments.

After these tests, the only watch that was left was the Omega. And after that, Omega became the watch of choice.

Omega used the caliber 321 until 1968 when it changed to the caliber 861. The 861 was the updated caliber of the high-grade rhodium-plated finished caliber 1861 and the more embellished 1863. 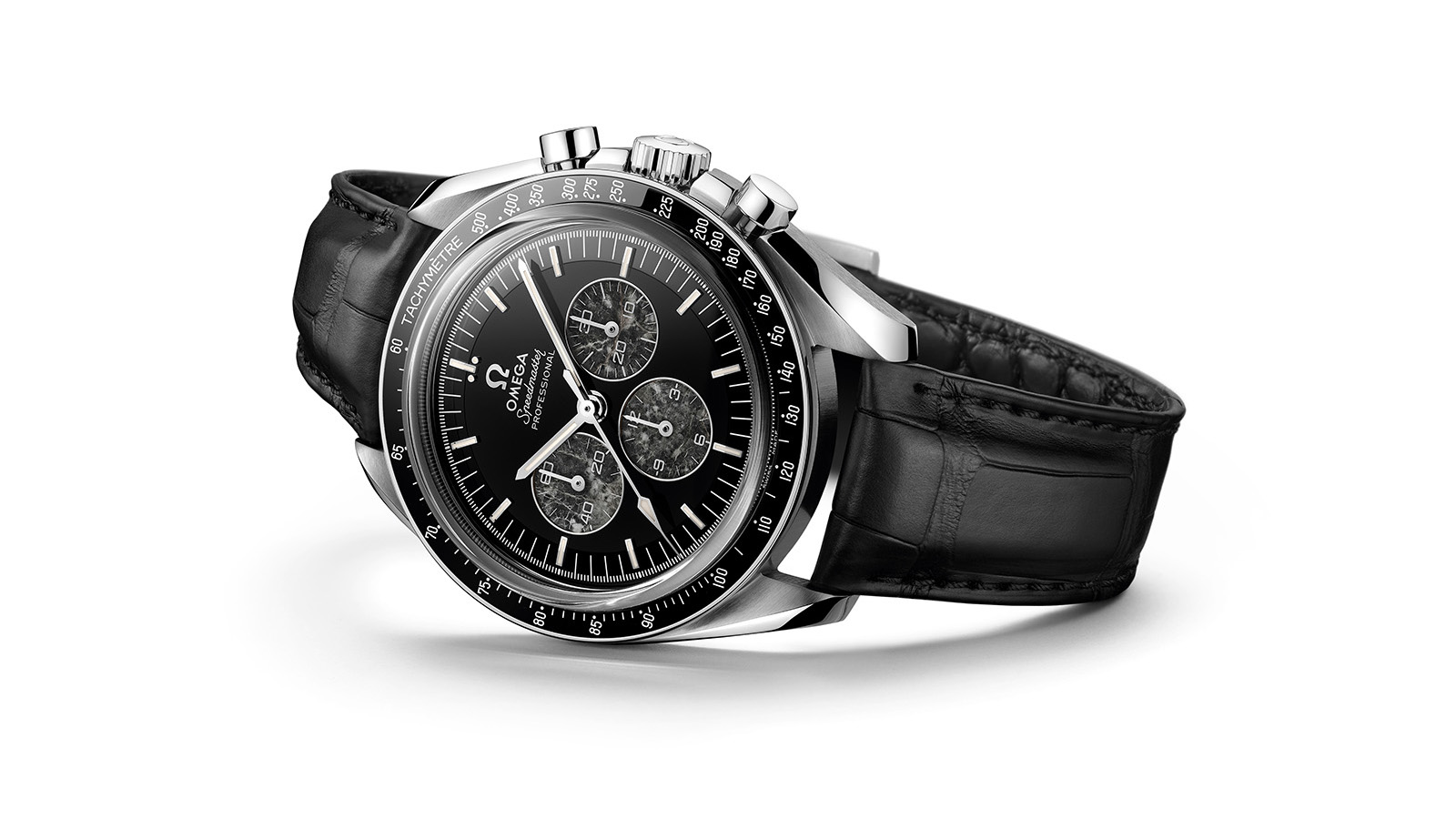 The new caliber 321 is not identical to the original, but it has the same design and is in-line with its original specifications.. For obvious reasons, Omega has made improvements and refinements to this movement for the relaunch, to make it more reliable, robust, and durable, in accordance with the mechanical watchmaking standards of 2019.

Omega has stated that the relaunched Calibre 321 will go into production at Omega HQ’s site in Bienne where they have developed a special “department” that will solely focus on the manufacturing of this caliber. This includes the assembly of the movement, as well as the assembly of the watch head and bracelet – all of these steps are expected to be performed by the same watchmaker. The Calibre 321 is considered superior to its 861 and 1861 successors for having a column-wheel operated chronograph in place of the cam-actuated system of the later movements and of course, for its history of being the official moon movement.

The first model to be equipped with the revived 321 calibre is, as mentioned, a full platinum version Speedmaster, but we can expect other Speedmasters to get this movement in the future. 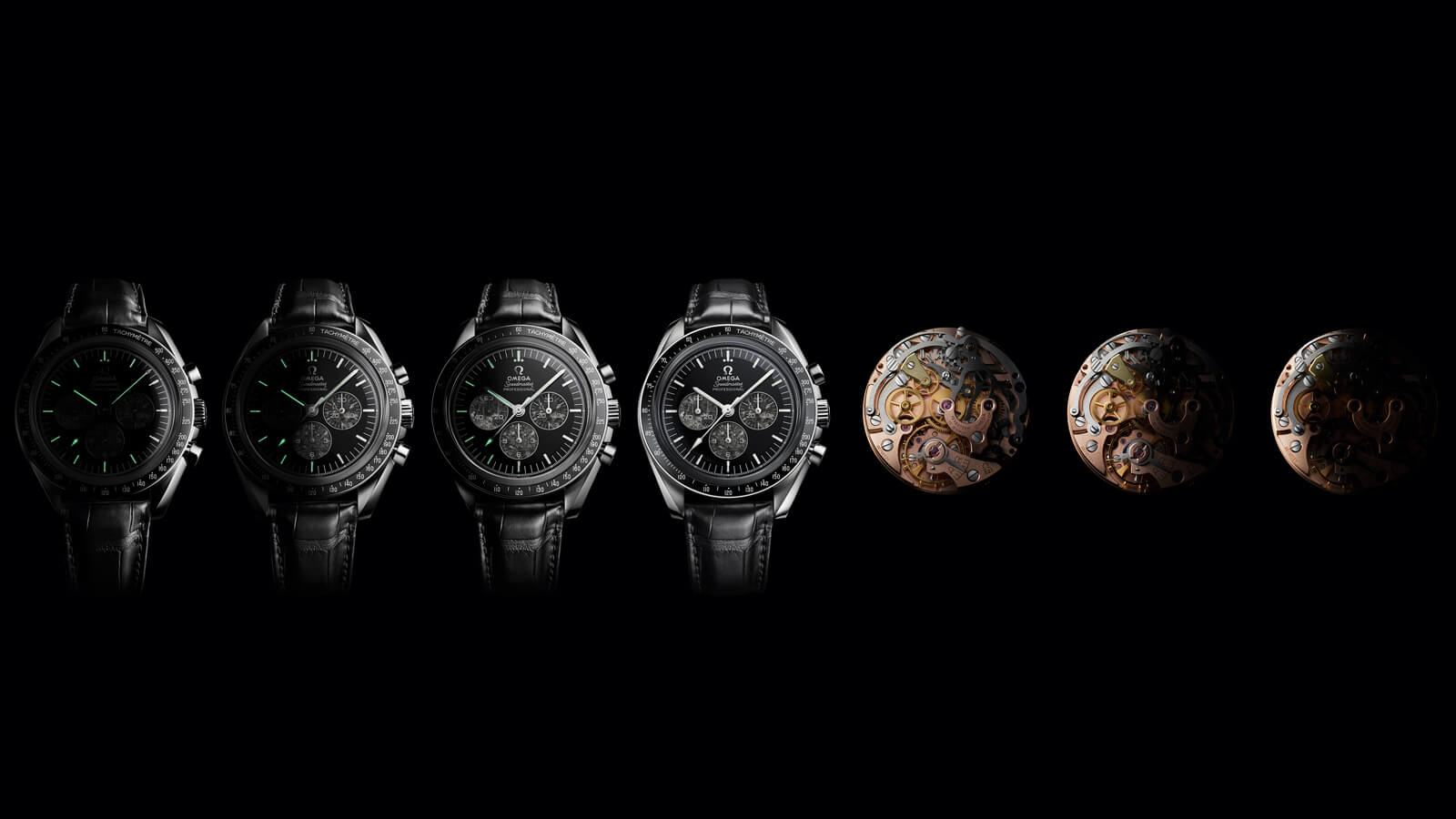 The Speedmaster 321 platinum has a sapphire-crystal case back – appropriate in order to admire the legendary caliber it is powered by. The chronograph features a 42 mm brushed and polished case crafted from a special platinum alloy with the use of gold (Pt950Au20). The case design is inspired by the asymmetrical 4th generation Speedmaster case with twisted lugs (ST 105.012). It is presented on a black leather strap with a platinum buckle.

The watch features a  black ceramic bezel with the Speedmaster’s famous tachymeter scale made in white enamel. It has a step dial formed from onyx, with a deep black color. The indices and most hands are made in 18K white gold (with the exception of the central chronograph seconds hand).

In the three sundials, you can find the material meteorite, which works as a tribute to the Speedmaster’s lunar history. This means, Omega has used real pieces of moon meteorite, which work as a great link to the Calibre 321’s history. Just like the back, the front crystal is also made in sapphire. 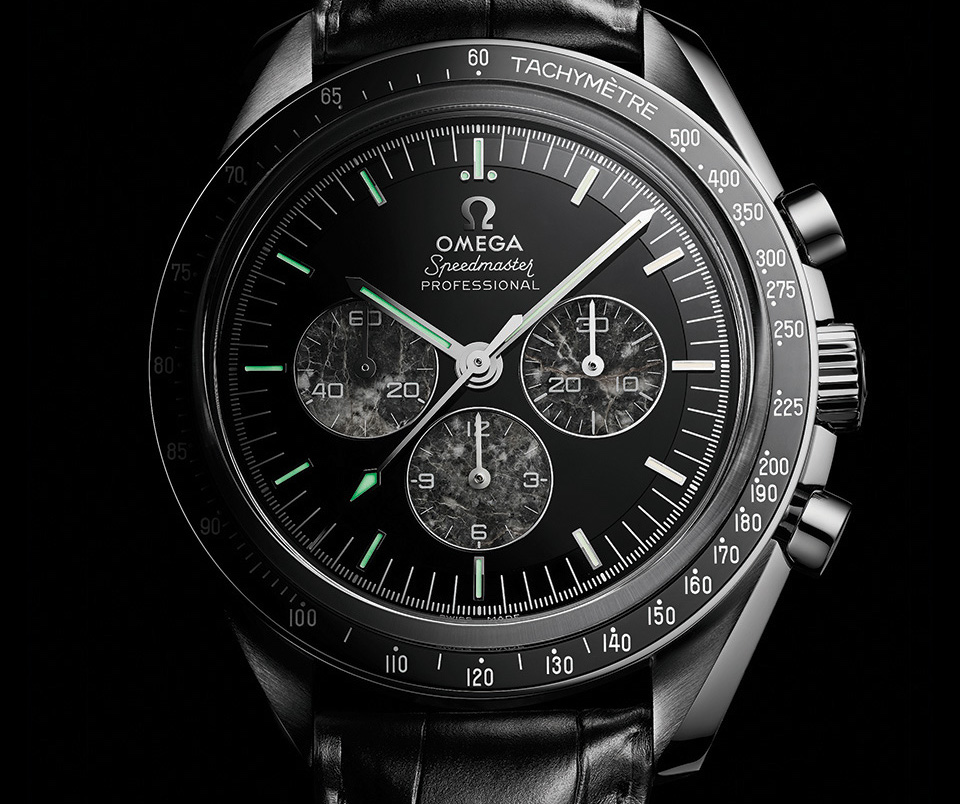 As a fun detail to make Speedmaster enthusiasts happy, it ha a dot-over-90 bezel. The hands and indices are coated with Super LumiNova for better legibility.

The plates and bridges are plated with Sedna gold.

The total annual 321 movement production is expected to be around 2000 movements, but not a limited edition. This means that, whilst the 321 is expected to be more accessible in the future, the 321 will still not be a mass-produced movement – at least compared to Omega’s standard manual caliber 1861.