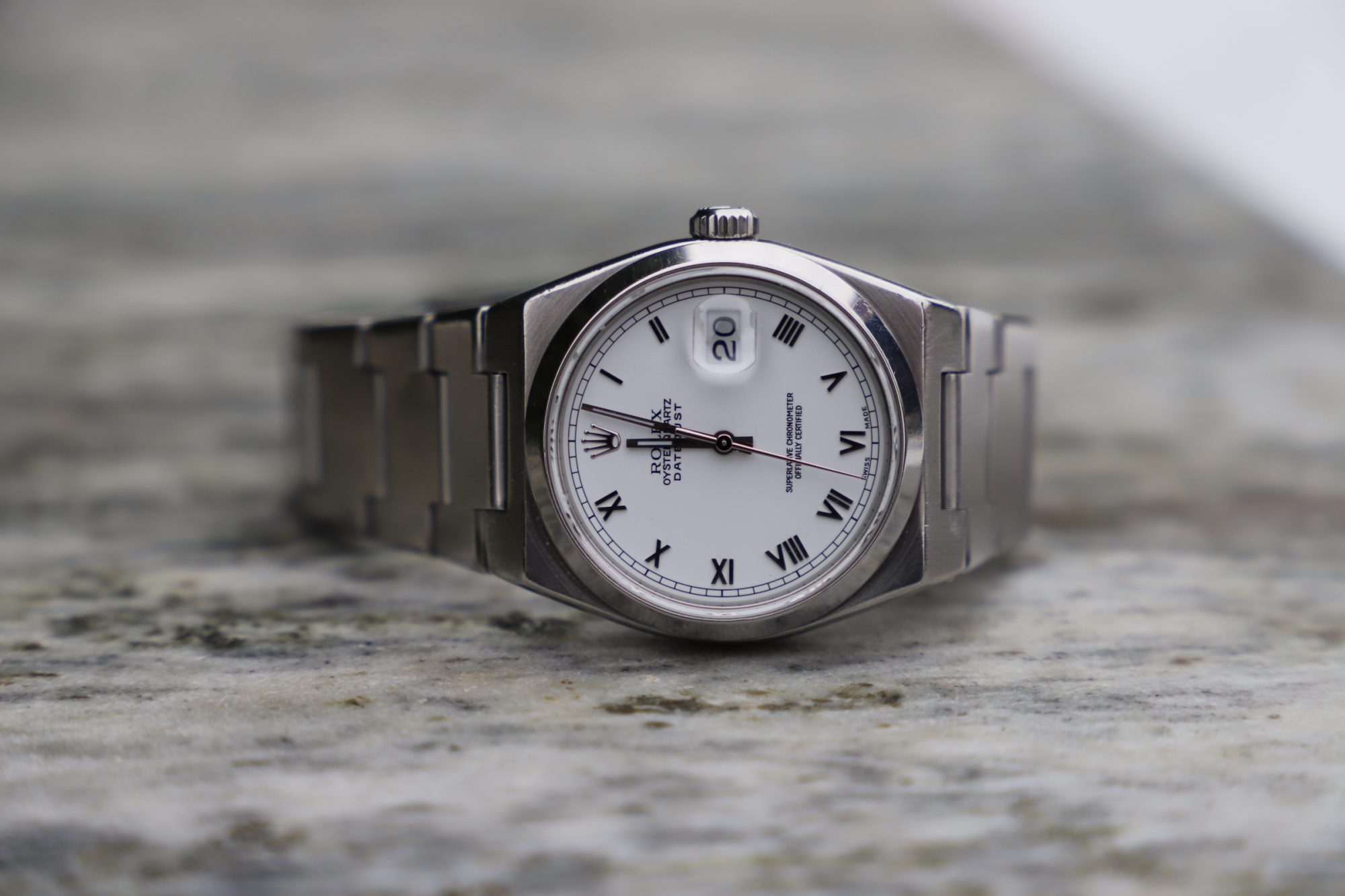 Your Complete Guide To The Rolex OysterQuartz

The Rolex Oysterquartz is a very special collection in the Rolex family. Despite the fact that the look of the OysterQuartz is very unusual and outstanding when comparing to other Rolex models, the watch uses a quartz movement that powers the watch.

The watch was first introduced in 1976 and the movement took Rolex 5 years to develop. The Oysterquartz was revolutionary, the precision was better than before, and the movement was the future they believed.

The Oysterquartz was only available in the Datejust version or as a Day-Date in both white and yellow gold. The production lasted for 25 years, and during this time only 25.000 examples were made is speculated, which actually makes the Oysterquartz a rare watch that you don’t come over every day. Back in 1970 and 1980 quartz watches were the new thing and almost every brand started to make quartz watches. Even such a big company as Audemars Piguet had a 97% production of quartz watches.

Even though the watch was believed to be the future, Rolex stopped the production of the Oysterquartz in 2001 and could be seen in the Rolex catalog until 2003. How could such prestigious and luxurious company sell watches powered by a battery?

Here are some interesting facts about the Rolex OysterQuartz.

The beginning of the Rolex OysterQuartz was the Rolex Quartz

Before the OysterQuartz came, Rolex and a number of other brands collaborated to develop a quartz movement known as the Beta 21. The beta 21 was used for approximately 1000 watches by Rolex, where 250 were made in white gold and the rest in yellow gold. The first quartz watch from Rolex was the reference 5100.

The Caliber 5035 was not COSC certified the first 5 years

21 patent Rolex had were issued for electronic watches

Between 1960 and 1990 Rolex is believed to have issued 50 patents for their watches thereby 21 of them were for electronic watches.

In the 1970’s, Rolex issued one patent for a digital watch with a LED screen. The process was taken seriously and a prototype was made and was believed to be called reference 7065.

In the last production year of the OysterQuartz watches in 2001, Rolex was believed to have improved the caliber 5035 ( Datejust models ) and 5055 ( Day-Date models ) to a better more precise movement believed to be called 5335 ( Datejust models ) and 5355 ( Day-Date models ). The new movement would include 23 jewels and featured a perpetual calendar. However, even though they had the ability to make a new improved OysterQuartz, Rolex never put the new movement in any OysterQuartz.

The OysterQuartz case was used for mechanical watches

Rolex made a mechanical Datejust known as the reference 1630 for 3 years. The watch had the same case and bracelet as the ordinary OysterQuartz but was running a mechanical movement, caliber 1570. During the production 1976-1978, only 1500 watches are believed to been made making it a very unusual reference.

The OysterQuartz was the third Rolex model to come with a sapphire crystal.

The battery of an OysterQuartz lasts up to 5 years

It’s been reported that some OysterQuartz batteries have lasted for up to 5 years, however, the average battery life in the OysterQuartz series is usually 2-3 years.

Even though Rolex never had an official accuracy claimed for the OysterQuartz movements, it’s been told that the movement shouldn’t differ more than 1 minute per year.

The OysterQuartz was only made in 36mm

The Rolex OysterQuartz was only made in 36mm during its production.

The OysterQuartz was only made in steel and gold

The Oysterquartz was only made in steel and gold. The Datejust only came as a steel and two-tone version in yellow and white gold while the Day-Date version came in yellow or white gold.

There are 12 different OysterQuartz watches

Here are the references for the Rolex OysterQuartz models:

The OysterQuartz has been on the top of Mount Everest

In 1978 Reinhold Messner was the first to climb Mount Everest without using oxygen tubes, on his wrist was a Rolex OysterQuartz.

What’s so special about the Rolex OysterQuartz, and are they increasing in value?

What makes the Rolex Oysterquartz so special? Well, considering the watch only was produced for 25 years, and only 25.000 pieces were made, it’s actually a rare watch At the same time, it is a watch that Rolex isn’t too proud about. Because Rolex takes great pride in making reliable and high-quality mechanical movements, and that is what Swiss watchmaking is all about, but the OysterQuartz is the only model in Rolex’s history to use battery-driven movements instead.

There are split opinions about the Rolex OysterQuartz. Some people absolutely love the aesthetics of the Rolex OysterQuartz with the integrated bracelet in the case, and its iconic shape. They also find the Quartz part of Rolex’s history very interesting, and the fact that while these watches are quite affordable compared to many other Rolex watches, they’re watches that you don’t see around too often, and this is an appeal that many people like, since they want to have pieces that not a lot of people have.

My personal thought is that it’s a very cool piece to keep in your collection due to it being so unique and different from what Rolex is known for – even though its design is notoriously Rolex-like. It’s been noticed that collectors have started to look at models early in the production line of the OysterQuartz and started to collect them, however, since this model hasn’t been too popular during its production years, it’s still a relatively cheap Rolex watch that’s a very unique piece to keep in your collection.

While many people doubt that the Rolex OysterQuartz will ever be a collector’s piece due to the fact that it is a quartz, the OysterQuartz has received more acknowledgment and attention in the last couple of years, and due to the limited numbers of the OysterQuartz Rolexes, it’s not unlikely that they’ll become more rare and attractive in the future.

18 thoughts on “Your Complete Guide To The Rolex OysterQuartz”