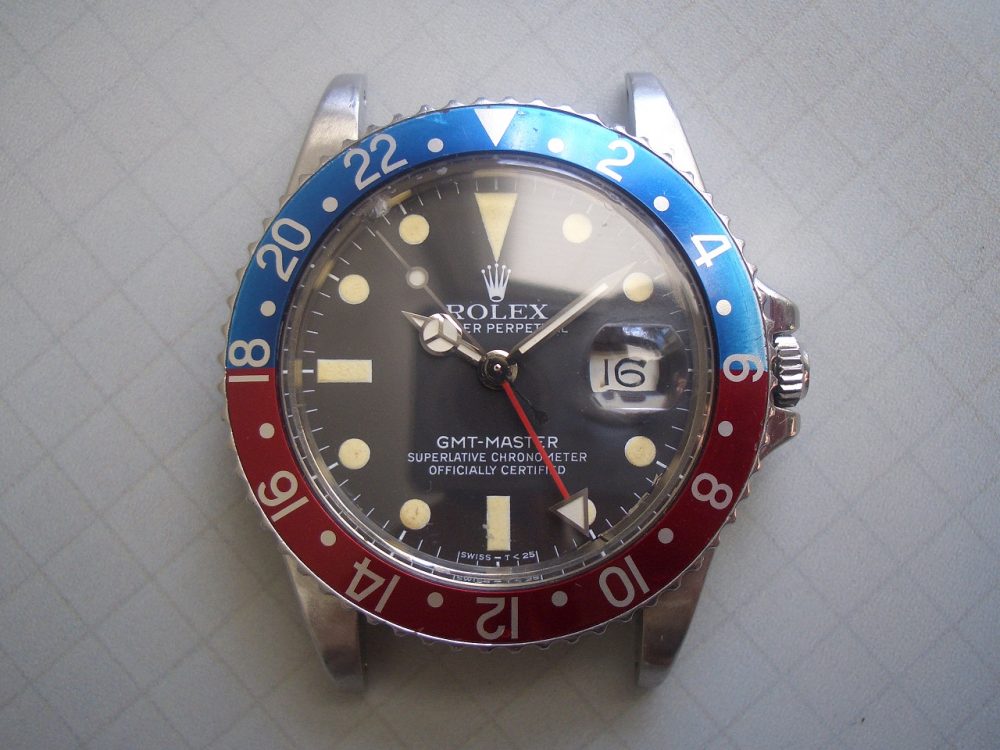 The Rolex GMT-Master has now been in production for more than half a century.

But over the course of this time, it has obviously evolved and been iterated many times, in true Rolex fashion.

Rolex is known for being a brand which develops watches which are meant to be truly helpful in their respective fields. The Submariner, for example, was developed to help divers not only keep track of the time underwater but most importantly, keep track of how much oxygen is left in the tank. The Daytona was developed to help racing drivers measure the average speed up to 400 kilometers per hour, and then, of course, there is the GMT-Master, which was developed upon the request of Pan Am, which looked for a tool that could help them keep track of two time zones simultaneously, as they started flying longer distances.

Today, the Rolex GMT-Master is one of the most popular models of Rolex. Recent models such s the GMT-Master II 126710BLRO on jubilee bracelet see a waiting list that is many years long, and naturally, the popularity of newer models also affects the price on older models – and vice versa of course.

Over the years, Rolex has released a number of different GMT-Master watches, and they’ve released countless of versions and iterations of the model, but in this article, we’re focusing on a specific watch – the Rolex GMT-Master 16760.

Background to the Rolex GMT-Master 16750

The GMT-Master 16750 is a model that didn’t live very long. In fact, it is a transitional model between an older, and a newer, which featured new technical improvements.

To start at the very beginning, the Rolex GMT-Master was far from what it is today when it was first launched. When launching a new product, it is difficult to know how it will perform in the field, and it is only from constant testing that you identify areas where there is room for improvement. Also, at the time of releasing, it may be the best it can be, but over time, the technology evolves, and this means that as new methods, inventions, and technology comes around, ultimately, you can create a better product, and this is exactly the case for the GMT-Master, and any other Rolex model for that matter.

When Rolex realized what they could improve with their watches, they updated them, and this also gave room for transitional models such as the GMT-Master 16750.

The Rolex GMT-Master 16750 was released cirka 1979/1980 (release dates back in the days were not as clear-cut as they are today) and was produced until 1988. This is quite a short production period for a Rolex model, and it is after its discontinuation that the watch has been identified as a transitional model.

And maybe most importantly is that due to the short production time, the 16750 is a model which it exists much fewer examples of than other GMT-Master references, which thus naturally tends to affect their price and desirability.

The 16750 was not very different from its predecessor which had the reference 1675, but being a transitional, the 16750 reference featured a major difference, which was technical improvements to the movement which improved the way the watch worked.

In fact, the watch had 3 technical improvements from its predecessor. First off, the 16750 featured the caliber 3075. This movement beats at 28,800 bph, compared to the previous 19,800. This means a greater accuracy, and overall a more robust and modern movement.

The most important and notable update to the 16750 was that its movement now had a quick set date function, unlike the 1675, which made setting the date so much easier.

Apart from these technical differences, the 1675 and 16750 are very similar, and it demands a well-trained eye in order to tell them apart.

Visual differences between Rolex GMT-Master 1657 and 16570

The visual differences between the two references are minimal.

The printed crown on the dial is slightly different, and the micro-aligned on the font of the dial also varies slightly, but apart from this, it’s tricky to tell them apart.

One way to tell the difference is obviously to see if the watch has a quickset date function, but another is to listen to the movement and hear if it is the fast- beating movement of the 16750 or the slower beating 1657.

But the fact is that the new 16750 didn’t need to have enormous changes in its design, because the 1675 had been manufactured between 1959 and 1980, and during this long production period, people had come to love the looks and design. But the new updated functionality made the 16750 a watch that instantly became a hit.

During the course of its production which lasted for eight years, the 16750 had two dial variations. The first dial variation featured matte black dials with tritium hour markers – in true original fashion at the time. Back in the days, matte dials were essentially standard for Rolex and many other watch manufacturers, but then came the glossy black dials with indexes that included the white gold surrounds, as opposed to the previous indexes which were made in steel.

The catch, however, was that glossy dials were something very new at the time – something that Rolex hadn’t quite mastered the art of making glossy dials. In fact, these dials tended to become what we now know as ”Spider dials”, which meant that they more or less got cracks in them. As a result, these dials were often replaced, thus making a spider dial GMT-Master 16750 very rare to come by. Also, matte dials were often replaced with glossy ones during servicing.

In the year of 1986, Rolex switched the dial during production. The first model was introduced without ‘Date’-imprint on the dial, but later versions show this imprint.

First thing first, the bezel of the Rolex GMT-Master 16750 is bidirectional and made in aluminum. This is opposed to the modern bezels of the GMT-Master which are made in Rolex’s own cerachrom ceramic, which, unlike aluminum doesn’t fade or scratch.

There were two bezel alternatives for the GMT-Master 16750. The first bezel alternative was the no so iconic ”Pepsi” bezel, which was a combination of blue and red, with half of the bezel being in red respectively blue.

The other alternative was the very stealthy and toned down fully black bezel. Interestingly enough, both of these bezels are offered in the modern lineup of the GMT-Master II range – only in cerachrom.

What’s especially interesting about this is that the modern iteration of the Pepsi version of the GMT-Master was introduced at Baselworld 2018. This is interesting because it is the first time after many decades that Rolex introduced the Pepsi color combination into their lineup again, which is a clever move because of the fact that the Pepsi has always been extremely popular.

Most interesting is that the modern Pepsi can be seen as ”heritage” model to the 16750 Pepsi. Why? Well, first off, Rolex isn’t really a brand about innovation, more about iteration, and so most of Rolex’s new watches can be seen as heritage models, but what is particularly interesting about the new Pepsi GMT is that it features a jubilee bracelet, thus making it the first modern GMT-Master II in Rolex’s lineup to have such. And which reference had the jubilee bracelet and the Pepsi bezel? The 16750 of course!

By now, many of the 16750 Rolexes have started to fade – some more than others. Some that have have been worn frequently have faded quite significantly, and this is something that vintage watch collectors tend to find very charming.

Also, this makes the hunt for the perfect watch more interesting, since there are GMT-Master 16750s that have bezel which covers the whole spectrum – from brand new to severely faded bezels.

It’s incredible just how much a bezel can affect the look of the GMT-Master 16750. And the best of all is that the bezels are interchangeable, which means you’ll be able to buy several and change the complete look on your watch by swapping the bezel.

The movement of the Rolex GMT-Master 16750

We’ve touched upon the movement and its functions briefly already. The 16750 has a Rolex Caliber 3075. This is an in-house automatic Rolex caliber, beating at 28,800 vibrations per hour.

The movement – and thus model – came with a big change compared to its predecessor, and this was that it now featured a quickset feature which enabled the wearer to quickly change the date independently.

Case and metal variations of the GMT-Master 16750

While the case of the GMT-Master looks almost identical to the Submariner case at the time, it’s not. In fact, the GMT-Master was a thinner watch at roughly 14mm

Like many Rolex models, the 16750 was not only offered in stainless steel. In fact, Rolex also offered the 16758 which is the full yellow gold version, as well as the 16753 which is the two-tone Rolesor yellow gold and steel model.

To make the GMT-Master even more luxurious and exclusive, Rolex also offered it with ”Serti dial”, which means “to set” (gems) in jewelry context, In French.

As such, GMT-Masters can be found with diamond hour markers with either ruby or sapphire indexes at 6, 9, and 12 o’clock. Naturally, these are quite rare as they were sold in significantly fewer examples than the steel versions.

In recent years, the Rolex GMT-Master 16750 has become increasingly popular. As such, this has naturally affected the prices of these timepieces on the secondhand market.

The GMT-Master being one of the popular models in Rolex’s lineup, and carrying a long and interesting history, this watch will only continue to increase in value – and finding a full set in good condition will be close to impossible.

Despite being an aviation watch, the GMT-Master is a watch that just works great and which is very universal. It looks just as good with a suit as it does with more casual clothes, and it’s just something that you can never go wrong with. It’s also a watch that all collectors have in their collection some time due to its iconic nature and its historical importance.

Explore all our Rolex watches for sale.