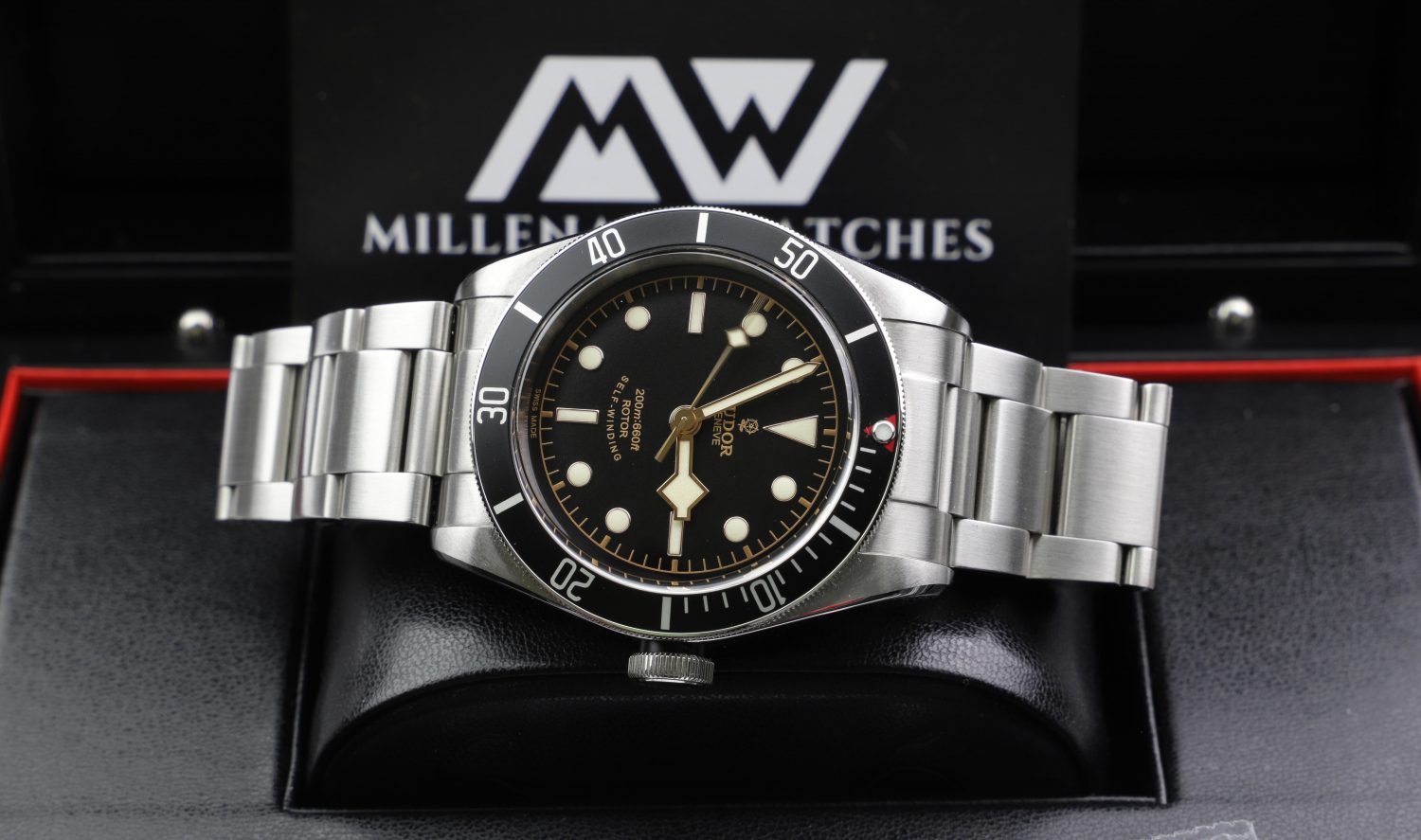 The Tudor brand has taken the watch industry by storm since the brand was relaunched. From being known by many as a ”poor mans Rolex”, to almost completely disappearing from the marketing and being forgotten, to rising again and now dominating the entry-level luxury sports watch segment.

And a watch that has helped Tudor achieve this is the Heritage Black Bay. This is unarguably Tudor’s most important model that helped put the brand on the map again, and now has developed a large fan base. The Tudor Heritage Black Bay really helped the brand show what the new chapter in its history would stand for, and in which direction it would go. It combines all the elements that people have come to love and appreciate in vintage dive watches, and in particular vintage Rolex and Tudor dive watches. 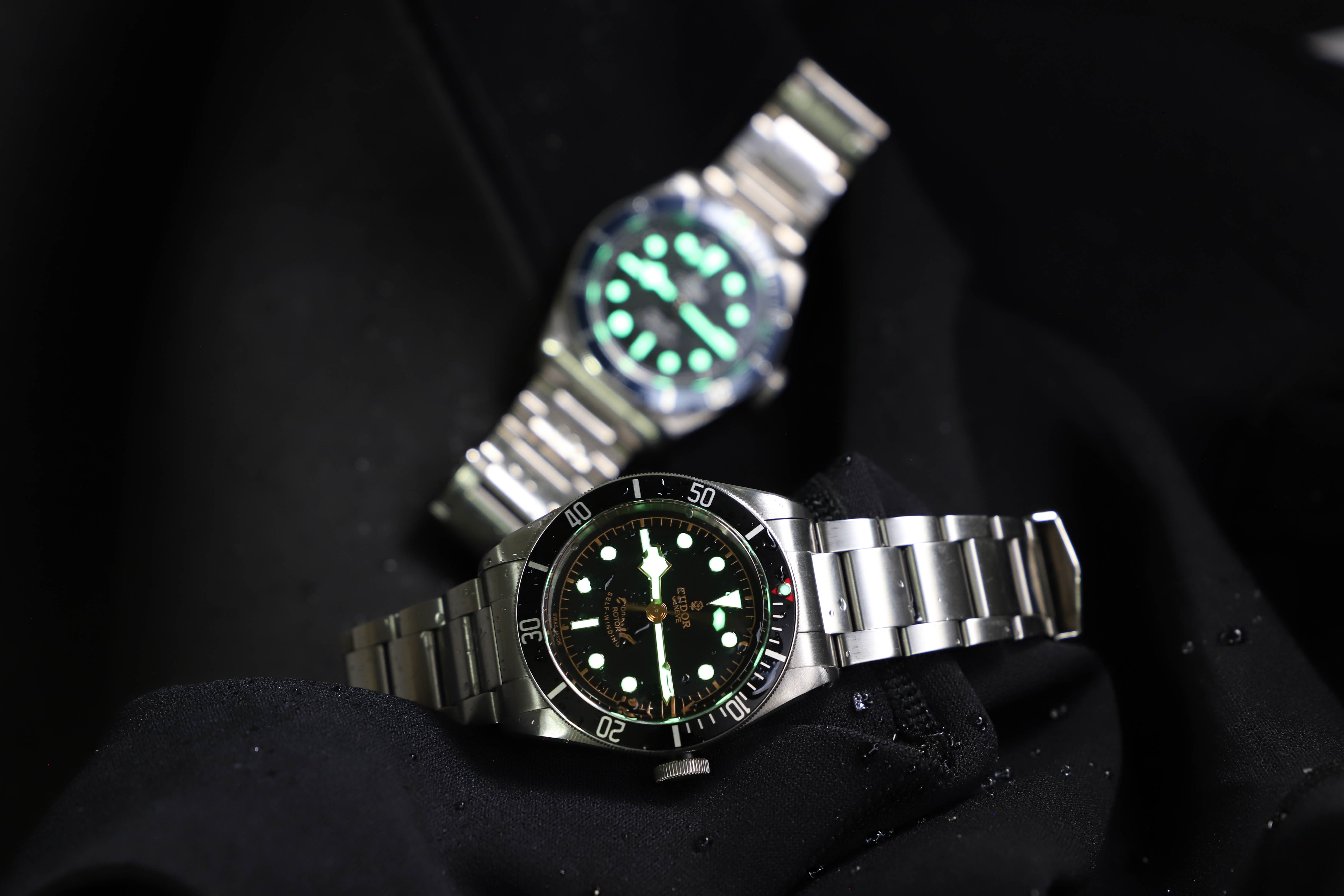 Launched in 2012, the Heritage Black Bay truly became an instant success. It was first launched as reference 79220, but reference 79230 took its place in 2016, refreshing the model with things like a new in-house movement, new bracelet, as well as other visual differences.

But in this article, we will focus on the most unique and special Black Bay watch that has been in production. We are of course talking about the Heritage Black Bay 79220N.

The reference 79220 has been produced in three colors; blue, black, red. The color variants were not released at the same time, and the 79220N was the reference that would arrive last.

The Tudor 79220N was announced on October 14th, 2015 but started hitting the stores in 2016. The Black version 79220N is actually the watch among the three which is the truest to the original heritage reference as it is based on the Tudor Submariner 7922 with both the black bezel and the red register. 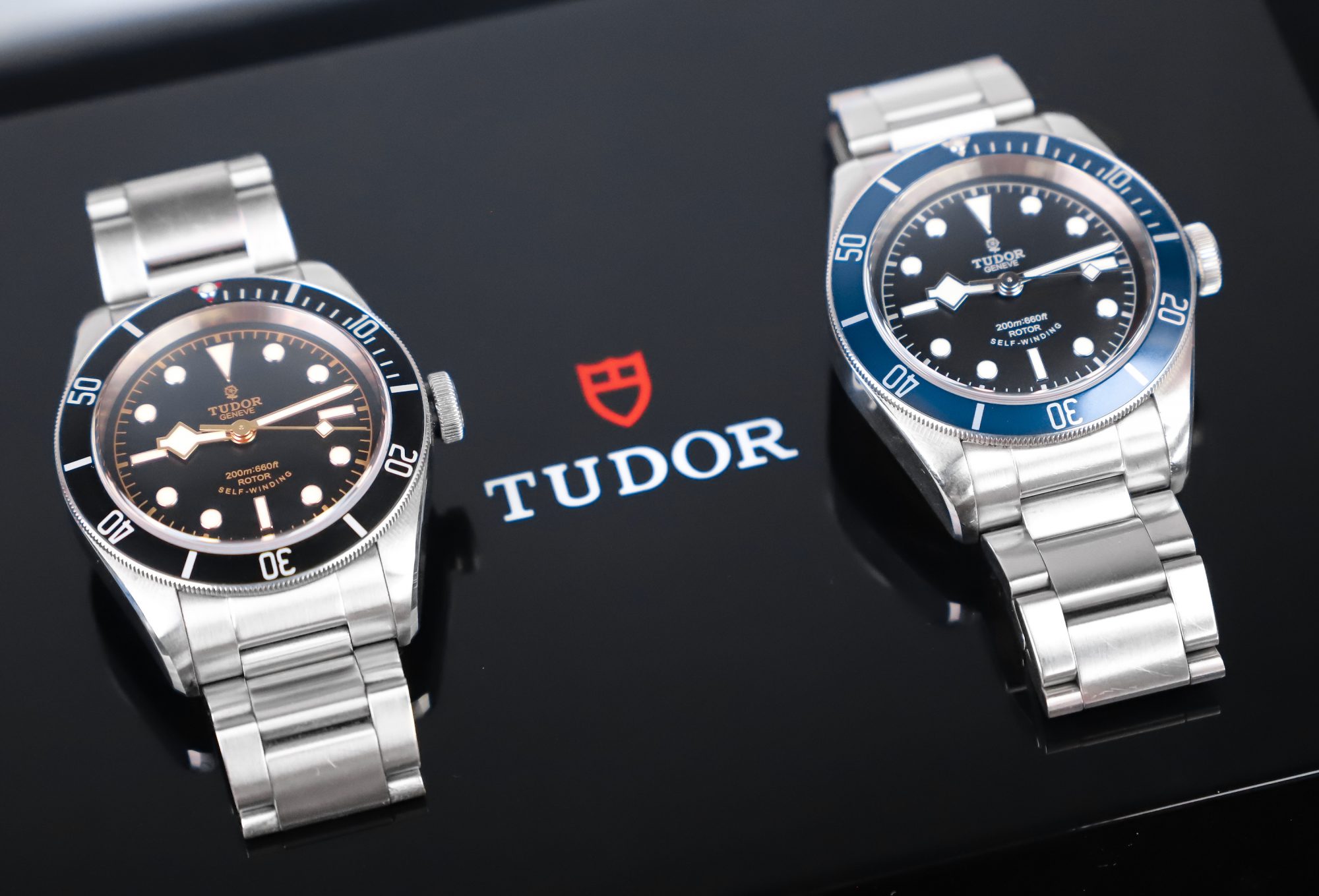 What is interesting about this is that during Baselworld 2016, March 17th, only five months later, Tudor discontinued the 79220 reference (with ETA movements) and replaced it by the in-house 79230 reference. With that in mind, you can understand that the Black Bay Black 79220N is a watch that has not had a long production time.

Considering the fact that the 79220N was announced discontinued only five months after it was released, it is the shortest production model ever in Tudor’s history. As a result, there are not a huge number of them on the market. Some authorized retailers only received a few, and this obviously makes availability very scarce.

As you can imagine, there is now lots of speculation regarding production numbers, but please note that this is not a limited edition timepiece. It’s just that because the reference was discontinued so quickly, the production of it didn’t last very long. 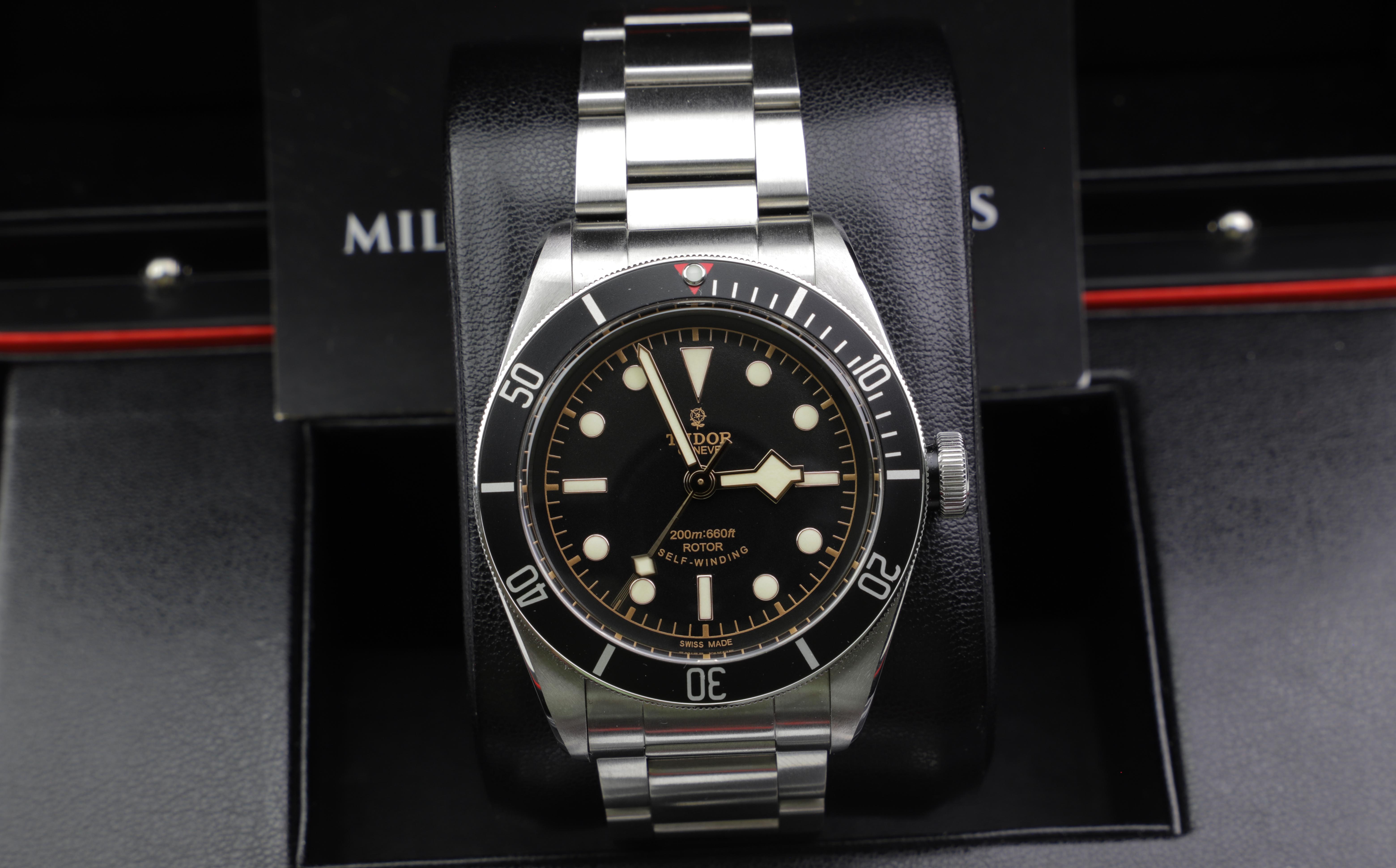 Because the Black Bay 79220N has been made in such small numbers, the demand and prices for them on the second-hand market have been increasing steadily.

What is so interesting about this is that Tudor was relaunched only a decade ago, yet has still managed to build a large audience of devoted fans and collectors that are willing to pay a premium for the watch. Will the 79220N continue to increase in value? probably. The number of them on the market is not increasing, and the awareness and popularity of the Tudor brand is only getting greater and greater.

Let’s look at the specifications of the Tudor Black Bay 79220N.

As you are familiar with, the Tudor Black Bay has taken inspiration from a number of different vintage dive watches from Rolex and Tudor, and mixed the best parts into one, creating a vintage-inspired dive watch with modern tech. 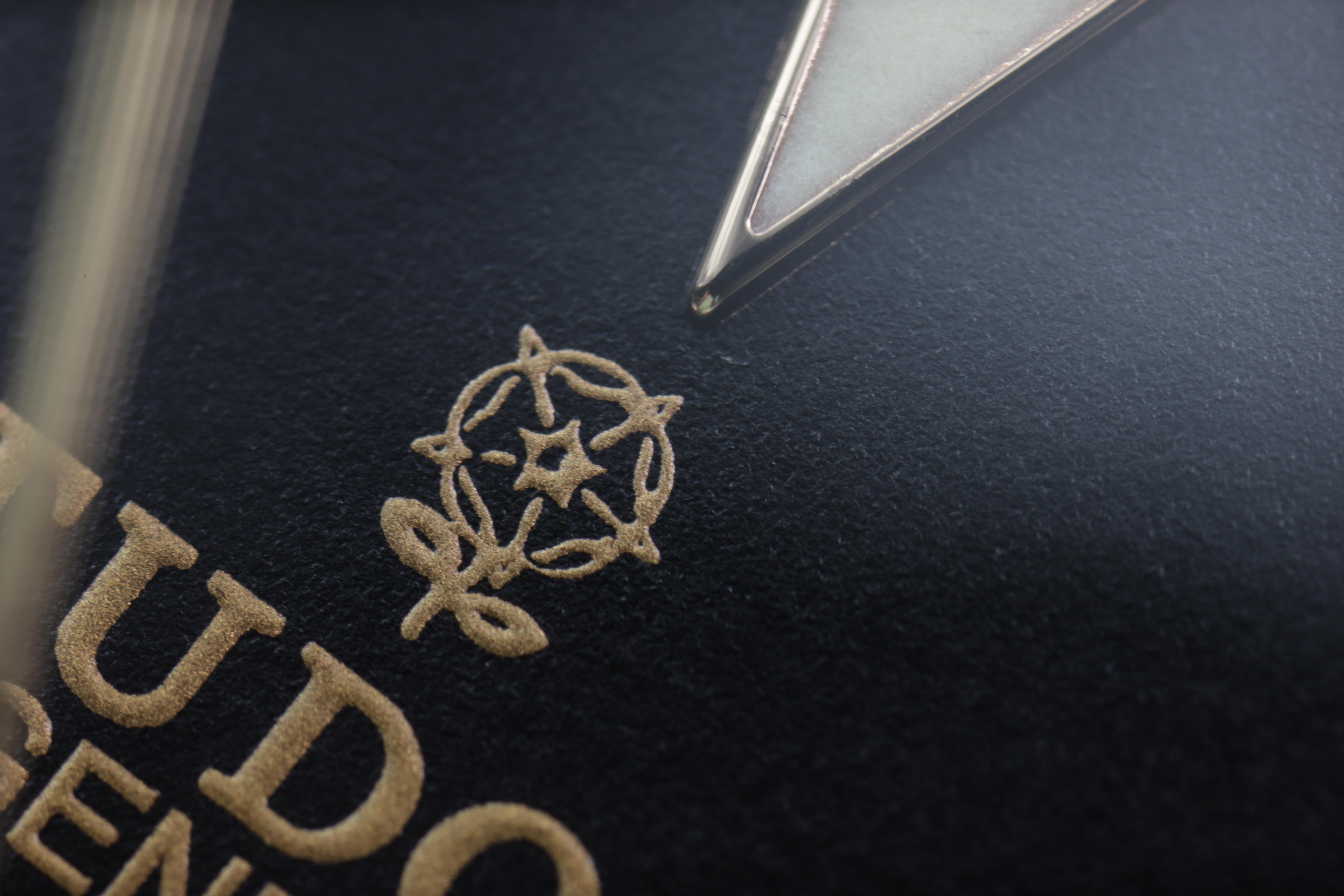 As mentioned, the 79220N is very similar to the early Tudor Submariner Ref. 7922. It is equipped with a number of vintage design elements such as no crown protection (a big crown) matte black gilt dial with gilt hands, a 200m depth rating and a black bezel, with a 60-minute diver scale. Some of these watches even have a red triangle on the bezel at 12 o’clock just like the 79220N.

The case of the Black Bay 79220n is 41mm in diameter,  has no crown guards, and a big crown on the side. The lugs are brushed on top and the case is polished on the sides. The lugs are beveled, just like all other Tudor Submariner dive watches.

The crown has the Tudor rose logo engraved on the side of the crown, which has been filled in with black color. And on a side note, there have been some reports that over time, there is color loss on the crown by some people. This, of course, isn’t really surprising considering the fact that it is just painted. This is also the reason why Tudor now has started making the crown logo in relief on some models instead.

The case of the 79220N is slightly larger than the vintage watches it has taken inspiration from. One reason could be that the ETA movement used in this watch is large and thus requires a larger case.

Furthermore, 41mm is not considered super big today. More so, it’s a size that many people like and find themselves comfortable with.

The dial and hands

The biggest difference with the 79220N is the black bezel. The red version already in production also has a gilt-colored print dial, so these two watches are identical except for the red respectively the black bezel. The reference number engraved on the backside of the top left lug does not indicate the color of the watch, merely “79220”. 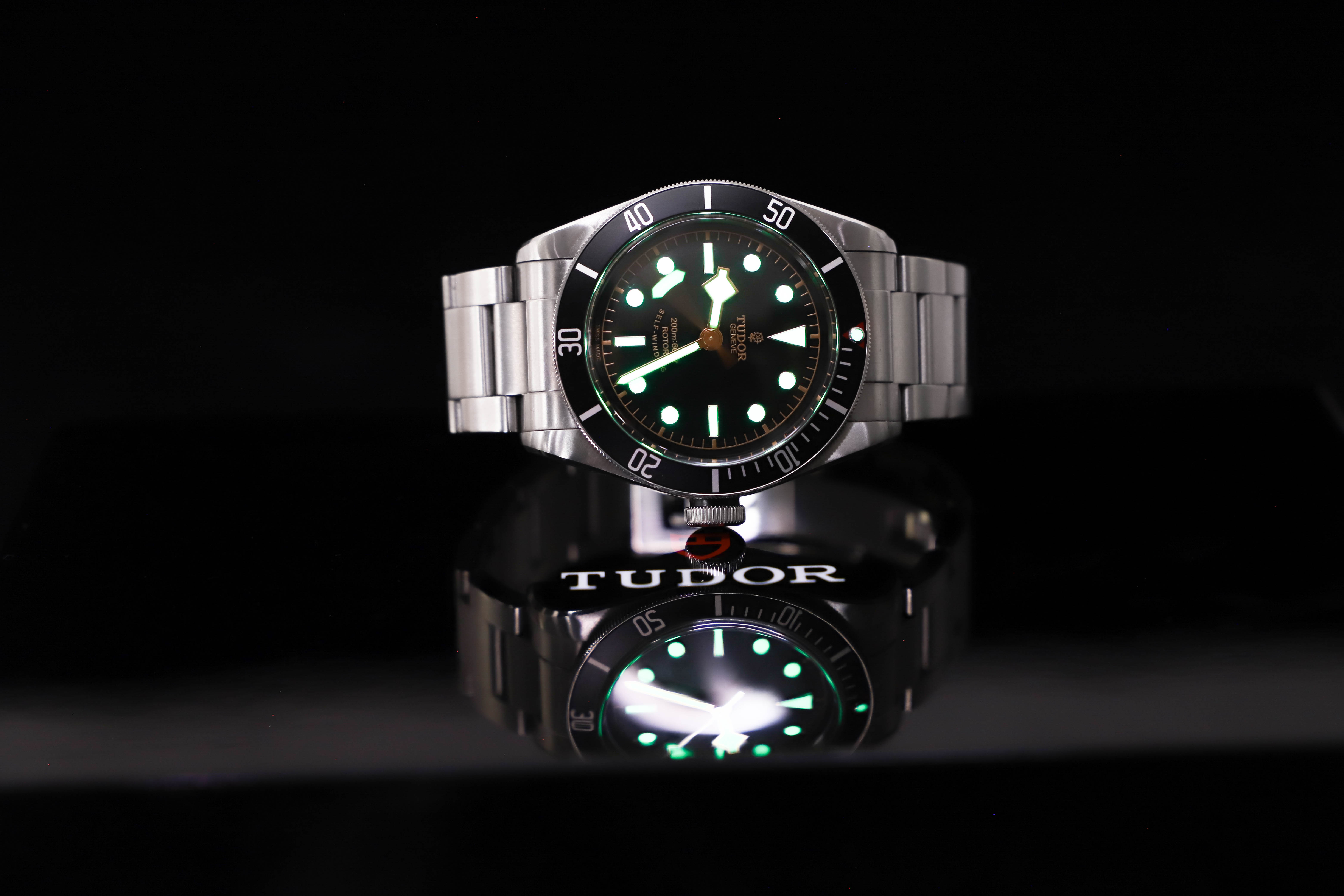 The 79220N has the same snowflake gilt hands as the 79220B. The matte black dial has a lovely grainy texture that really gives the watch a vintage feel and lots of life in the sunlight.

The luminous mass on the hands and indices are colored in a faux-patina color to give it more of a vintage feel. Faux patina has always been something that splits opinions. Some people like it, others don’t.

Something that has allowed Tudor to get this extreme status of popularity and collectability is the fact that their watches are so well-made. The finish of the dial is just perfect.

Probably the detail that has become the most associated with the ETA Black Bay is the ”smiley face” printing on the dial. It’s just a fun detail that looks really good on the dial.  This is a detail that is appreciated and loved by collectors. And a reason why some people love it so much.

Furthermore, unlike the later 79230 references, this watch still features the Tudor rose logo on the dial.

The watch is equipped with a unidirectional rotating bezel with 60 clicks and a notched profile.

As the name suggests, the watch has a black bezel. This bezel is actually matte black, which gives it an even more vintage feel. The bezel is equipped with a red triangle at 12 o’clock which really pops And is a super nice detail. The bezel has one-minute markers from 0 to 15.

As you know, the Black Bay 79220N is fitted with a standard ETA movement, calibre 2824 which has been modified by Tudor (original an ETA 2824. Despite the fact that the 79220N is released at the end of the production, it still has the same movement as the other two versions.

In its modifications, Tudor removed the date function, changes the anti-shock mechanism, and slightly updated the hairspring stud.

The movement beats at 28,800 bhp, features a hacking second mechanism, and boasts 38 hours of power reserve.

It’s certainly not the most advanced movement, however, what it is reliable and robust. Great for a sports watch.

The 79220 and the successor 79230 have a lot of similarities, but one thing that sets them apart is the bracelet.

The 79220N is equipped with an Oyster style bracelet, whereas the latest Black bay has a rivet-style bracelet

If you look at the option of the market, more people tend to have a favor for the old bracelet since it is cleaner and less cluttered. Especially considering the fact that the rivets have no practical function.

The 79220N always comes with an additional black fabric strap from the factory – a benefit that Tudor has now removed with its new reference. 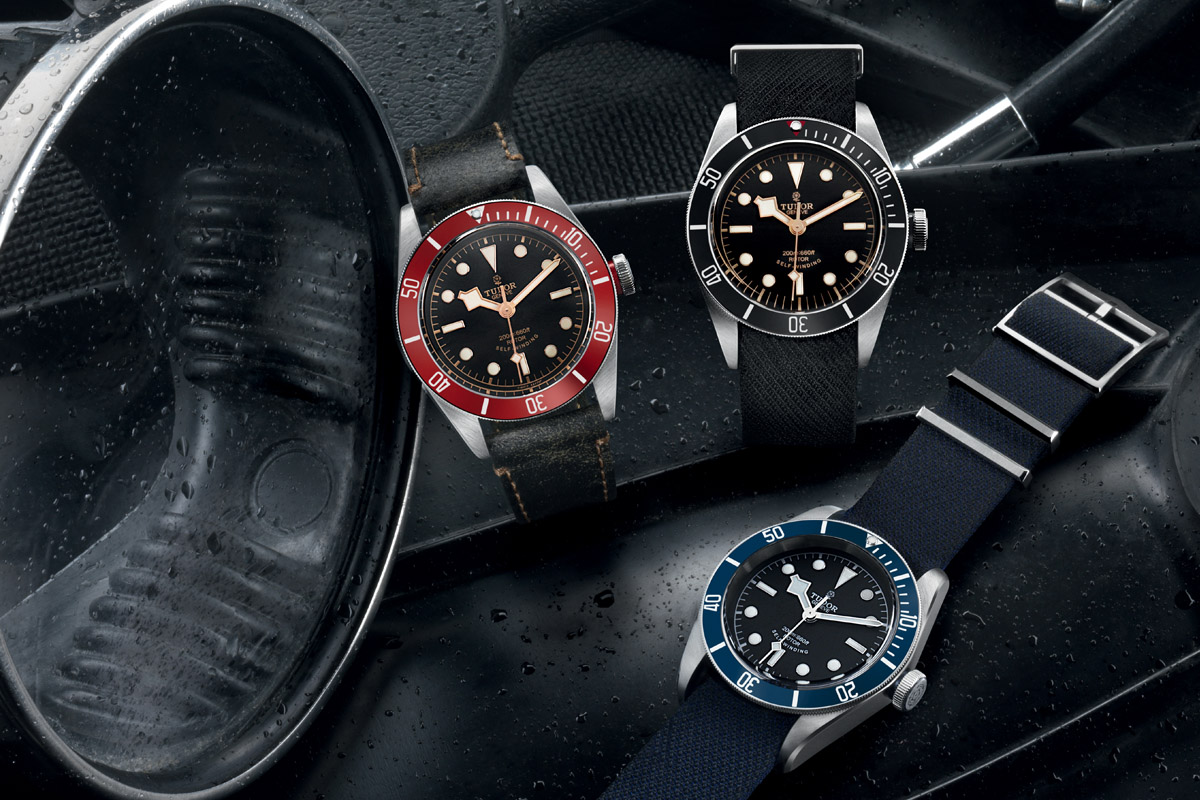 The Tudor Heritage Black Bay 79220N is unarguably a future collector’s piece. It has already built a devoted fan base, and as a result of the relatively low production, the prices have slowly but surely increased since the watch was discontinued.

The Tudor Black Bay 79220N takes the best from Tudor’s vintage watches and combines that with modern and reliable tech.

The Tudor Black Bay range has become immensely popular, but also played an important role in the relaunch of the brand. The historical importance that this model has played for Tudor makes, in particular, a watch such as the 79220N with a limited production run particularly important.

And it’s not surprising that a watch such as the Black Bay has gotten so much appreciation and praise. It’s well-finished, robust, reliable, and

But it is not surpassing that the Black Bay has become such huge success. It has a high-quality finish, it is robust, reliable, well-made, and last but not least, extremely well-designed and good-looking.