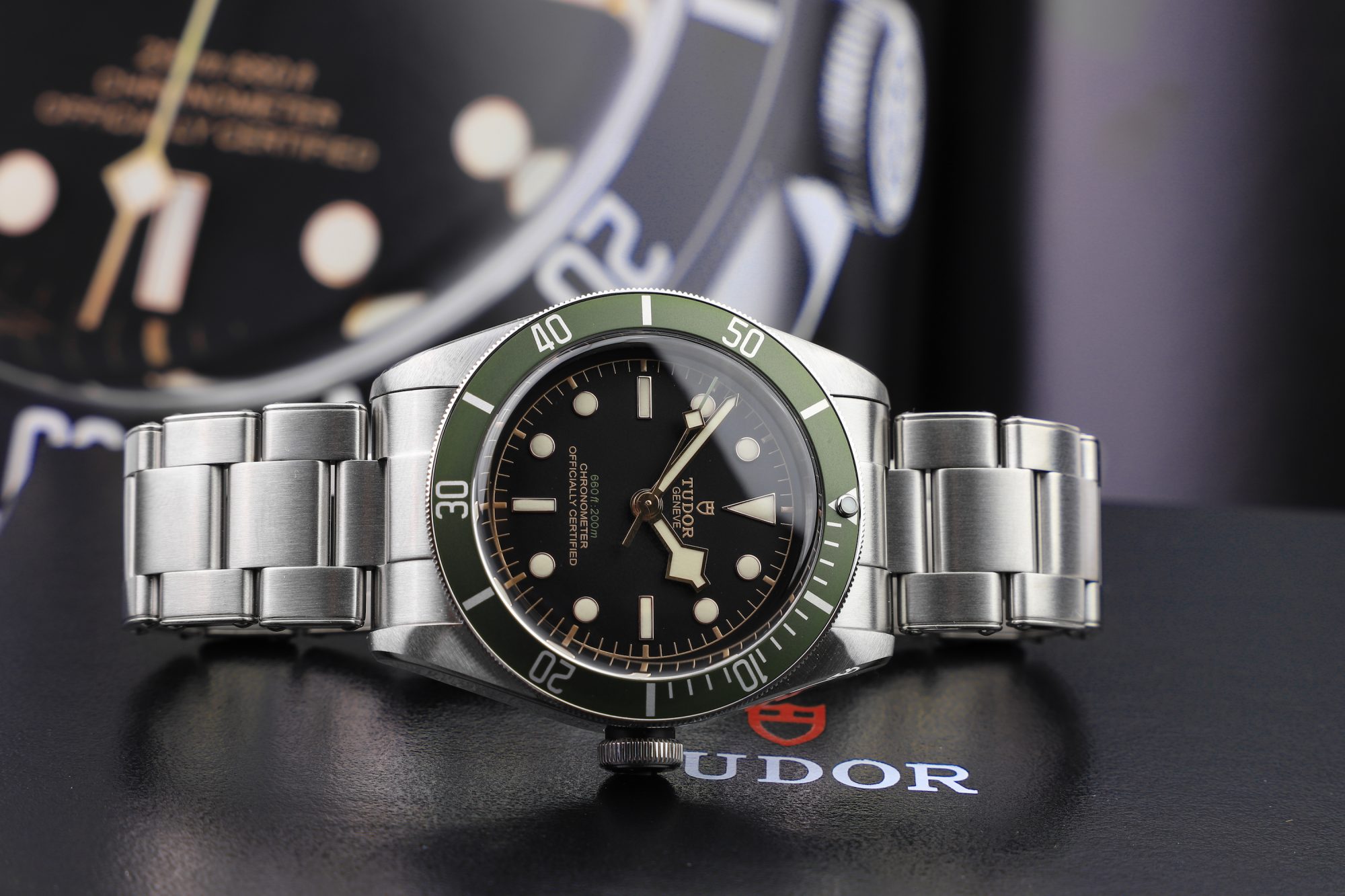 The first Tudor Heritage Black Bay was released in 2012, and since then, the Black Bay has come to become an extremely popular watch. The Black Bay Builds on the iconic dive watches from Tudor (and its parent company Rolex), in particular from the 50s and 60s, and combines that with modern features.

And considering that the vintage dive watches from Tudor and Rolex had become extremely popular on the market, whose prices increased heavily due to increasing demand, the introduction of a cheaper alternative that implements these popular design elements means a watch that was very well received right from the bat.

Limited editions/special editions of the Black Bay have also been introduced, one of which is the Tudor Heritage Black Bay Harrods reference 79230G which we’ll be focusing on in this article.

The first Heritage Black Bay model that was released had the reference 79220, followed by a letter, representing the color of the bezel. The three colors that were available upon launch were red, black, and blue, represented by R, N, and B. 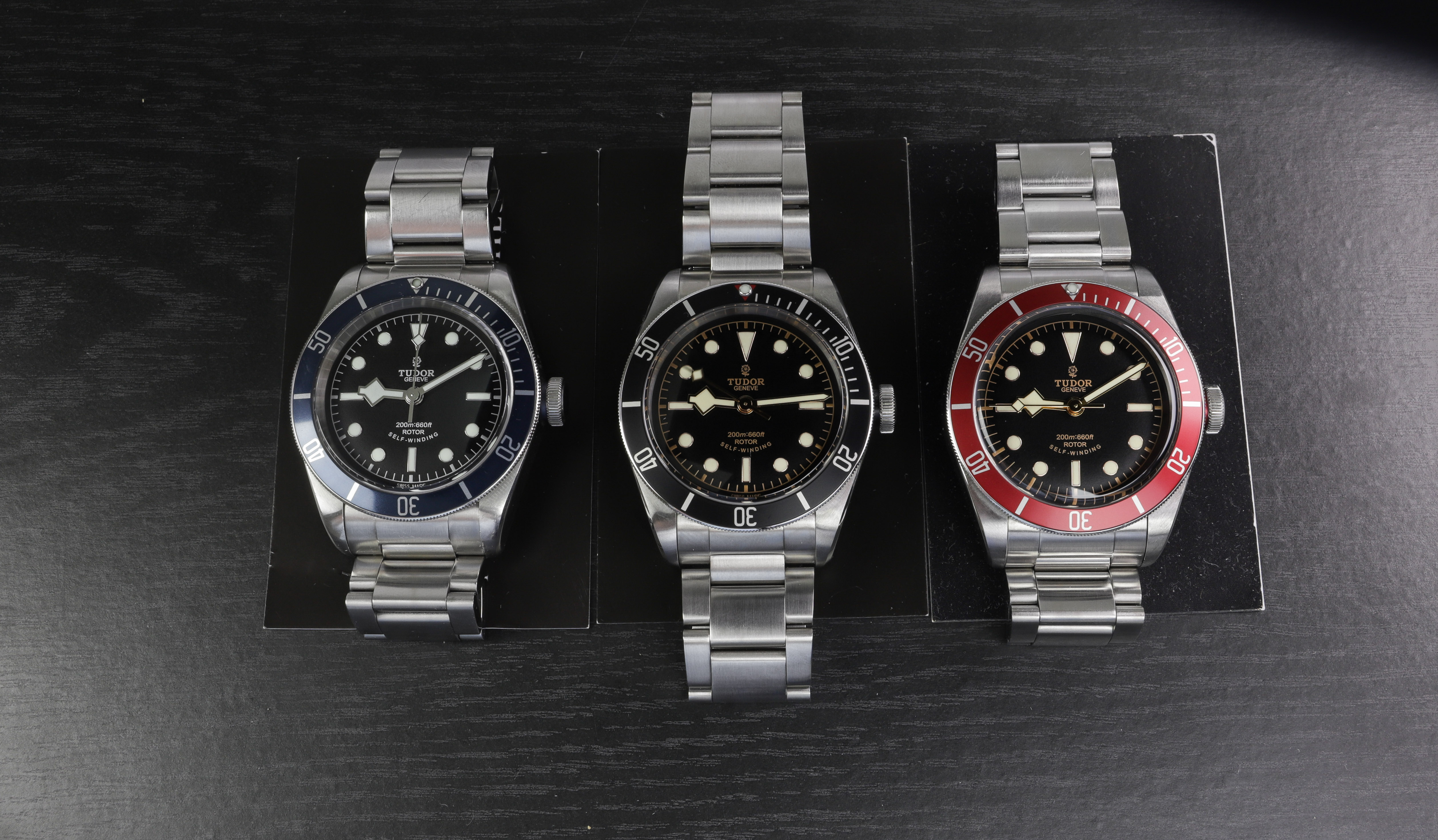 The first Black Bay featured a Tudor-modified ETA movement, but in 2016, Tudor discontinued the 79220 model range, in favor of a new reference, the 79230. The three watches remained in Tudor’s Black Bay lineup, but they did feature some changes from the predecessor. The biggest change was that Tudor had now fitted the watches with Manufacture Tudor in-house movements, replacing the previous ETA movements. The watch is now powered by the caliber MT5602, in-house, COSC certified – automatic winding movement. 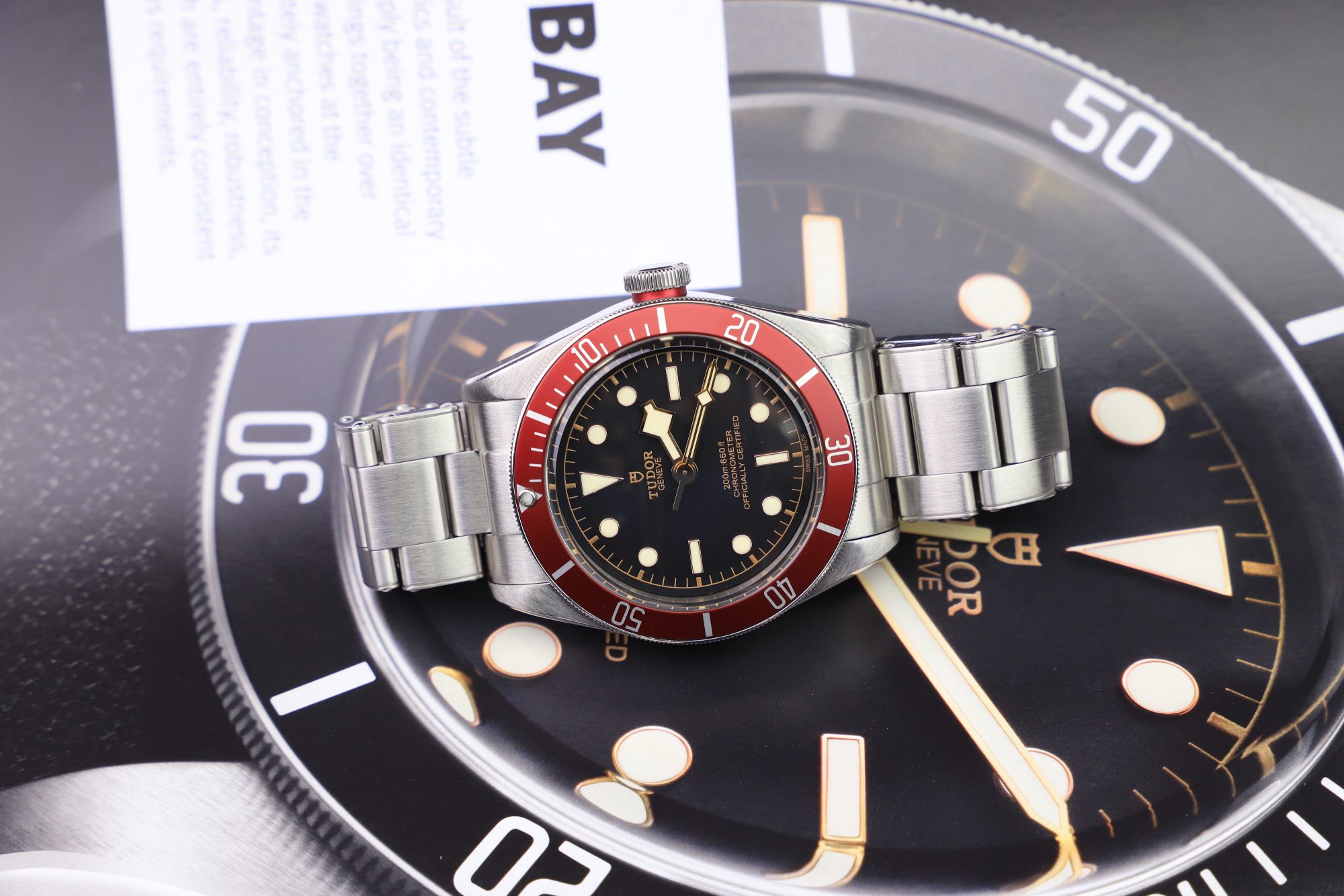 Tudor did this for many reasons, but the main reason was to add another value proposition to the watch. Using an in-house movement also meant positioning the Black Bay differently, as dive watches with in-house movements in that price range are relatively few.

The new reference 79230 also came with a few visual differences. The case remained the same, and so did the bezel and the dial, except for the printing on the dial, which was changed in order to show that the watch now featured an in-house movement. Furthermore, Tudor’s rose logo which previously had been used was changed to Tudor’s more modern shield logo.

The watch’s thickness also increased, even though the case remained the same, in order to give room for the new movement. The newer reference is also equipped with a rivet bracelet with faux rivets, which is inspired by the rivet bracelets of the old vintage Tudor dive watches. 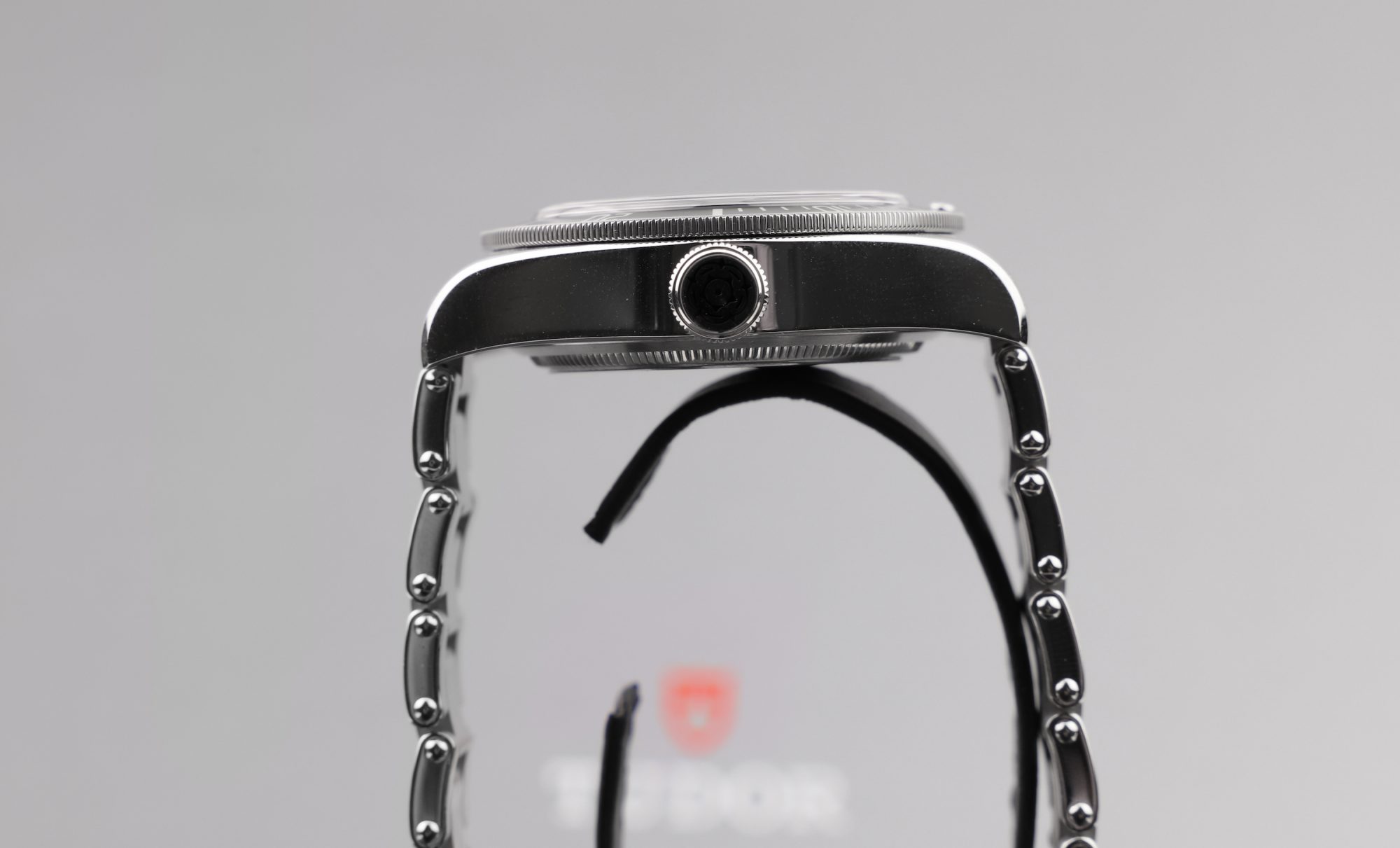 The case is 41mm in diameter, and made in 316L stainless steel. The case contrasts brushed with polished, and has a big crown, without crown guards. The watch is equipped with a domed sapphire crystal.

The huge success of the Black Bay model has given Tudor reason to continue building on this model and developing new variants of that watch. One of these is the special edition Harrods Black Bay reference 79230G which has come to become one of the most sought-after Black Bay models on the market. 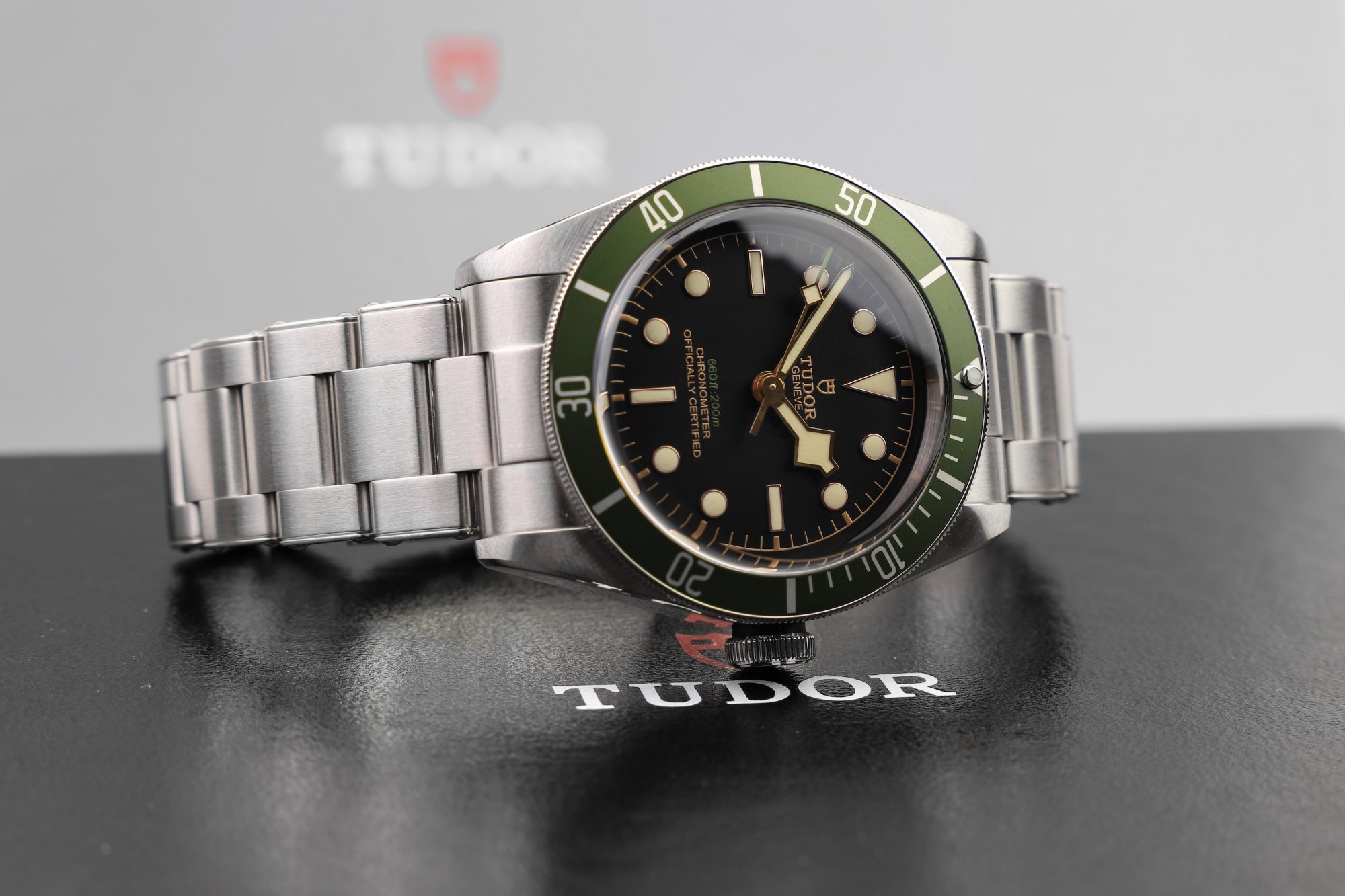 The regular 79230 Black Bays have different dials. While the red and black have gilt dials, the blue version has white printing, and it also has white luminous material instead of cream-colored. Lastly, the hands and outer rings on the indices are also finished in steel as opposed to 18k gold on the black and red versions.

Since the Harrods edition has a gilt dial, gold markers and hands, and cream-colored luminous material, it is most close to the black and red versions.

The differences between the dial from these are that the ”600 ft: 200m” printing on the dial is printed in green instead of gold. Since it is a Harrods limited edition, it makes sense that Tudor has used Harrod’s iconic green color for the watch. 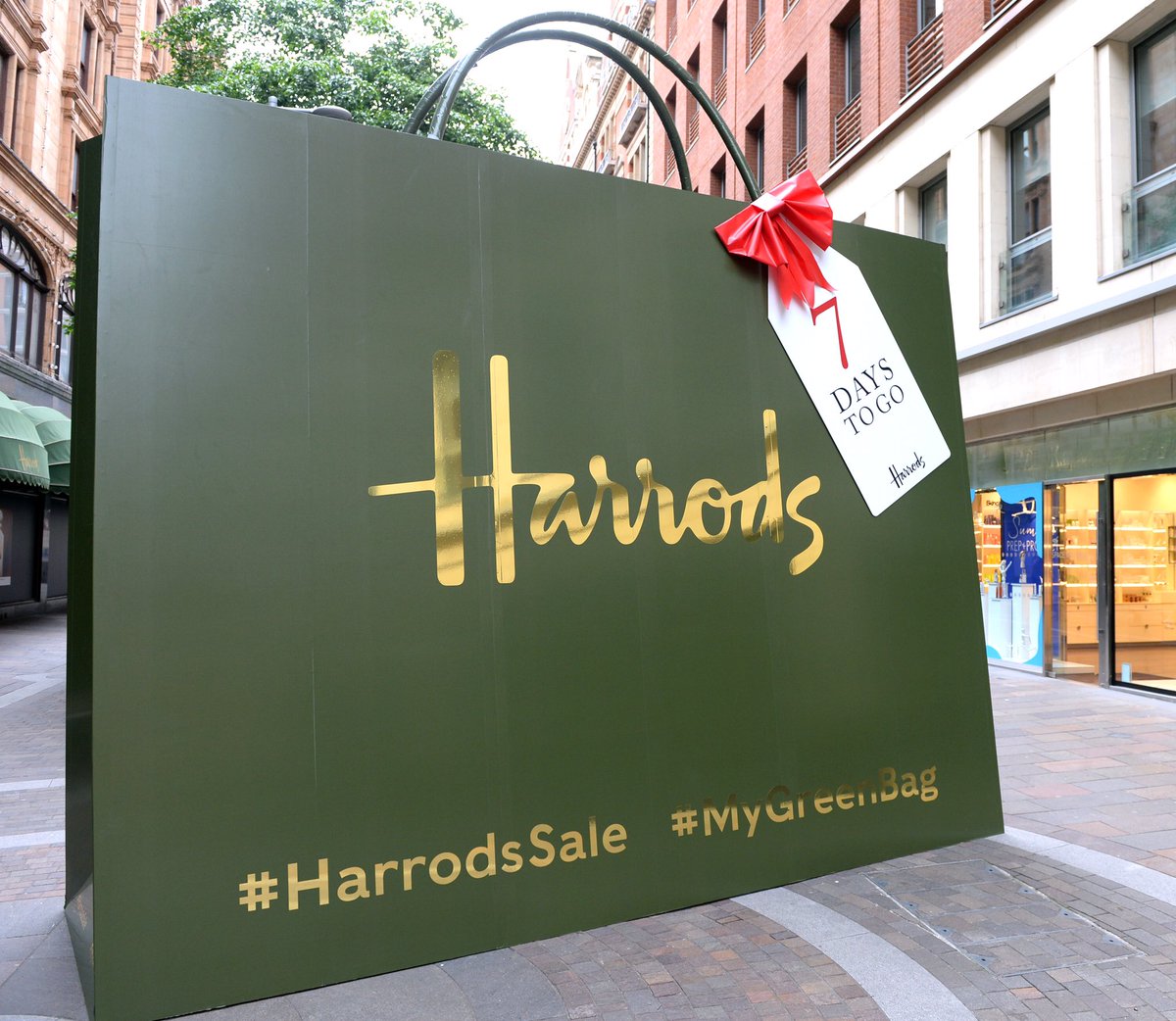 The other visual difference that you see when looking at the dial is the second hand. Rather than being completely finished in gold, the tip of the seconds hand is painted in the same green color that you find printed on the dial, continuing on the green Harrods theme.

Lastly, a small detail that you may not notice at first is that the depth rating has been changed to show “feet first” rather than meters to reflect the Britishness of Harrods. 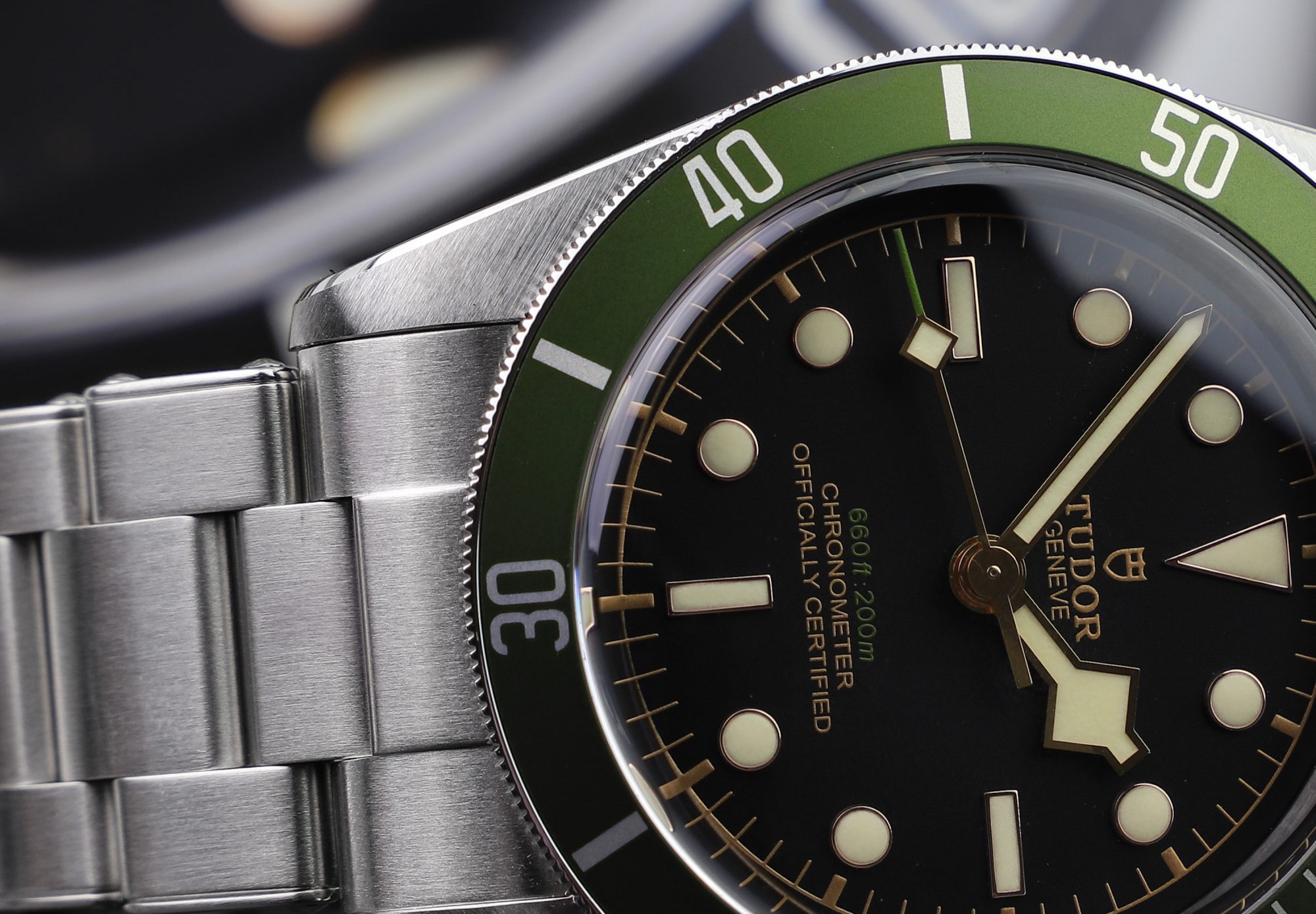 The dial has a beautiful matte texture, which gives the dial a great character, as the dial catches the light beautifully.

The bezel is a unidirectional rotatable bezel that has a matte finish.

The bezel is the thing that differentiates the watch the most and makes it instantly recognizable. Instead of featuring a black or red bezel, the Black Bay Harrods special edition has a striking green bezel, which is unique to this watch and cannot be found on any other Tudor watch. It goes without saying that because this is a Harrods special edition watch, the bezel has been made in the green Harrods color. The watch features the iconic ”snowflake hands” that Tudor’s divers have now become known for. 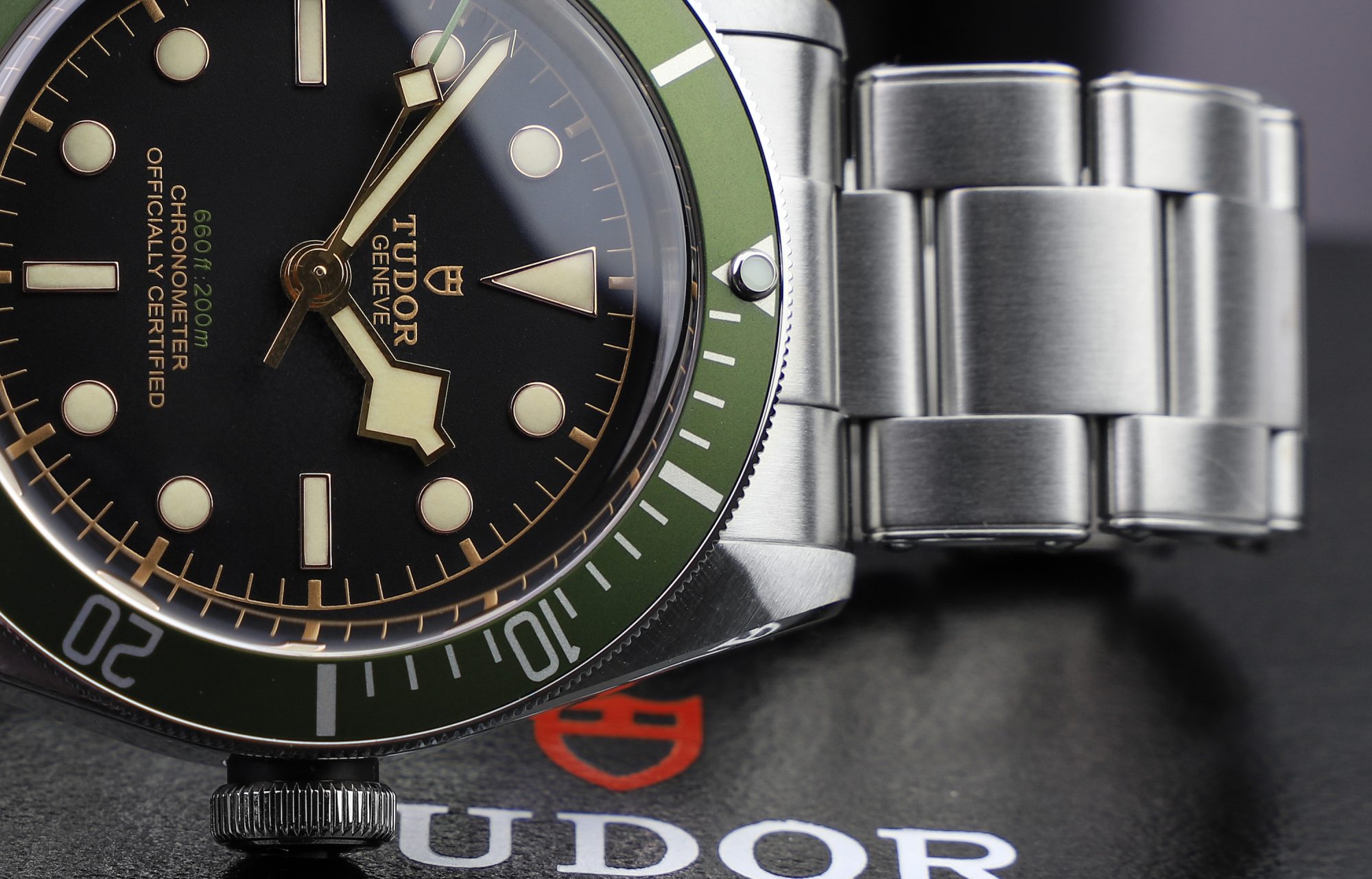 The last difference between the 79230G from the standard Black 79230 is that the case back has been engraved.

The Harrods 79230G is also engraved with a unique watch number, which represents the production number of that specific watch. This is interesting since it isn’t actually a limited edition watch with a set production number, and no one really knows how many watches will actually be made. 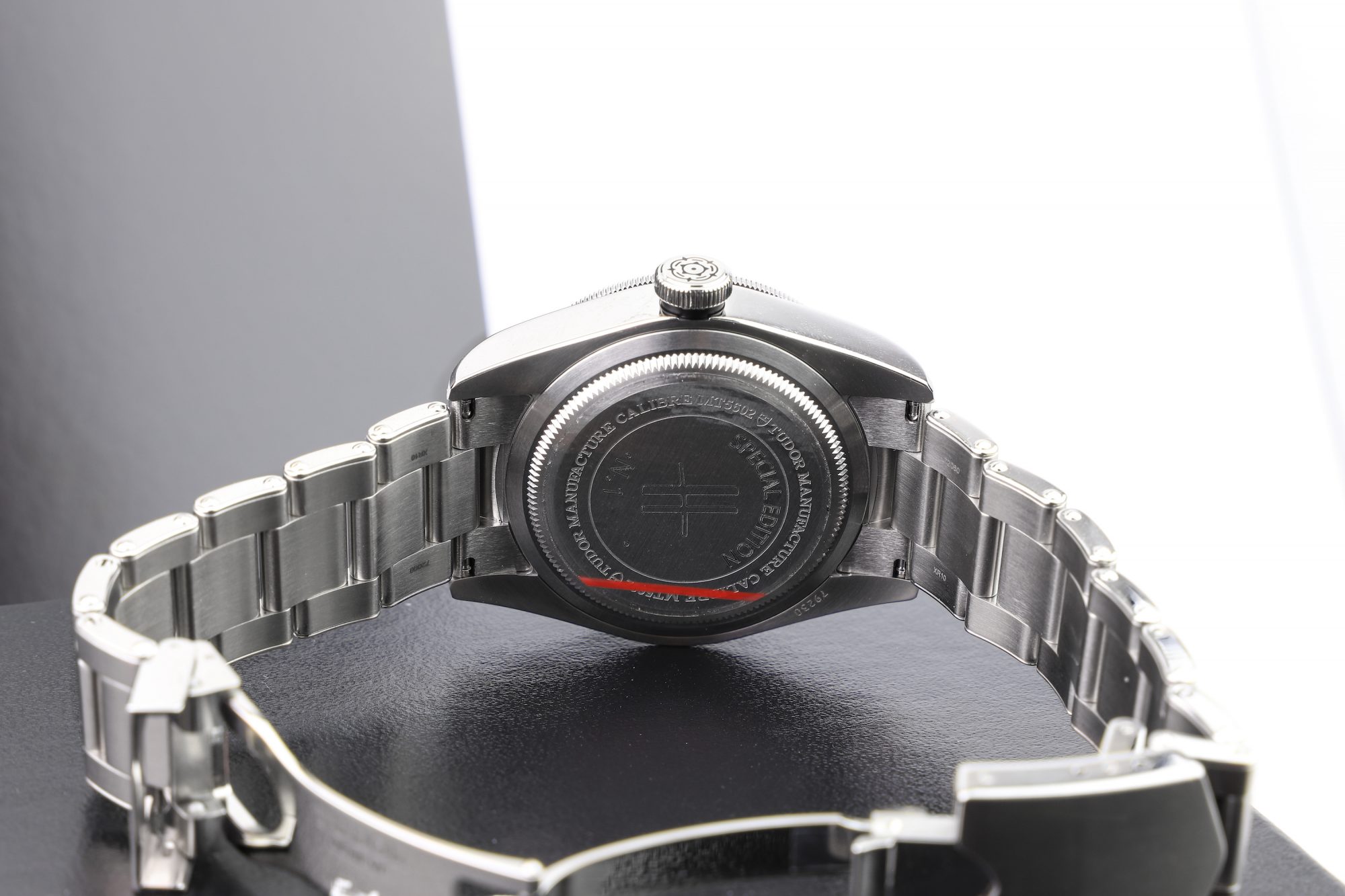 This type of engraving can be seen as a reference to Tudor’s military past relationship with the military, as this way of engraving the watch with its unique number was done when Tudor (and other brands) produced watches for the military.

There’s also the letter ”H” engraved on the case back, from the Harrods logo, as well as the text ”SPECIAL EDITION”.

The watch is, as mentioned, fitted with a finely brushed steel bracelet with faux rivets. The first Black Bay model, the 79220, did not feature these rivets, and the introduction of these contributed to further enhancing the watch’s vintage look. 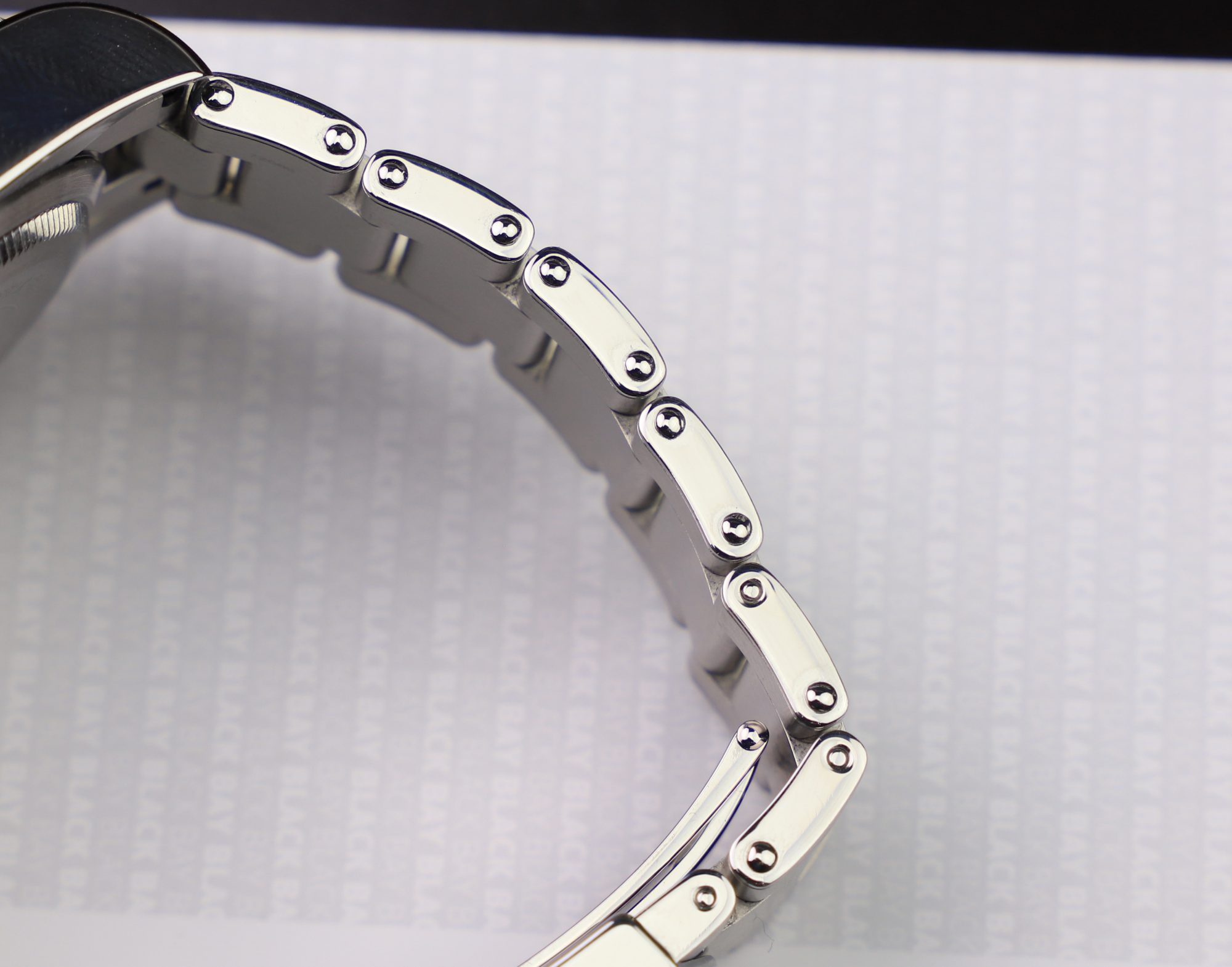 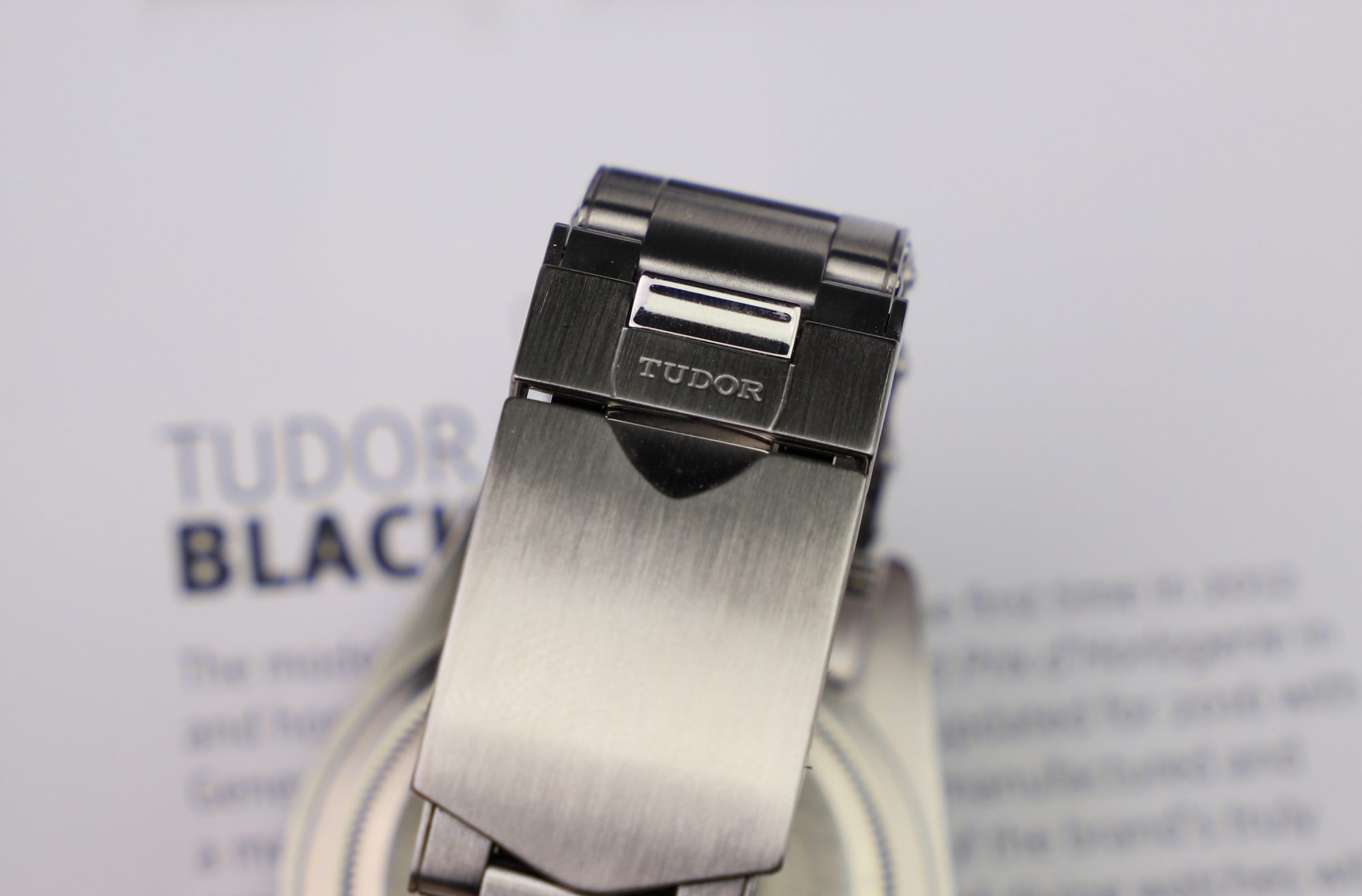 The Tudor Harrods 79230g also comes with a dark fabric strap. The fabric strap that is included with the Harrods edition has a green hue, matching the green theme of the watch. In the early days of Tudor’s relaunch, up until the introduction of the new reference Black Bay, many of Tudor’s watches came with a complimentary fabric strap. Today, however, Tudor has removed the fabric strap from the set, so the only time you get the strap is when you either buy your watch solely on the strap or, purchase it separately.

Now, the good thing about the Tudor Black Bay Harrods edition is that this watch includes the Tudor fabric strap. This is a great bonus as Tudor’s fabric straps are really qualitative and quite comfortable.

Furthermore, Tudor has given zero information regarding the plans for the 79230G. How long the model will be in production, and how many pieces will have been manufactured in total once it is discontinued, only Tudor will know.

An interesting point about the Black Bay Harrods is that the price is no different from any other stainless steel Tudor Black Bay. This means a retail price of about €3200 (subject to change). But, as mentioned, the fabric strap is no longer included when you buy a Black Bay with the bracelet, but on the Harrods edition, the fabric strap is still included. So in that sense, the Tudor Harrods gives you more value for money.

As you are probably familiar with, there is a waiting list for buying the Tudor Harrods limited edition. In other words, you cannot just walk into Harrods and buy one.

Apart from these visual differences, the Black bay Harrods 79230G is like your ordinary watch, so if you are familiar with the red or black (or blue) Black Bay 79230, you will feel very much at home, even though the green bezel gives it a completely new and unique look.

The Black Bay Harrods is a limited watch, sold exclusively through the famous Knightsbridge department store, with a long waiting list. This means that there will be significantly fewer examples of this watch than the other Black Bay models when it goes out of production, and this makes it a highly collectible timepiece that will only continue to increase in value over time.

The movements beat at a frequency of 28,800 beats/hour or 4Hz. This is a Tudor Manufacture (in-house Tudor movement). The movement is regulated by a variable inertia oscillator with a silicon balance spring which is held in place by a traversing bridge. The movement is COSC certified.