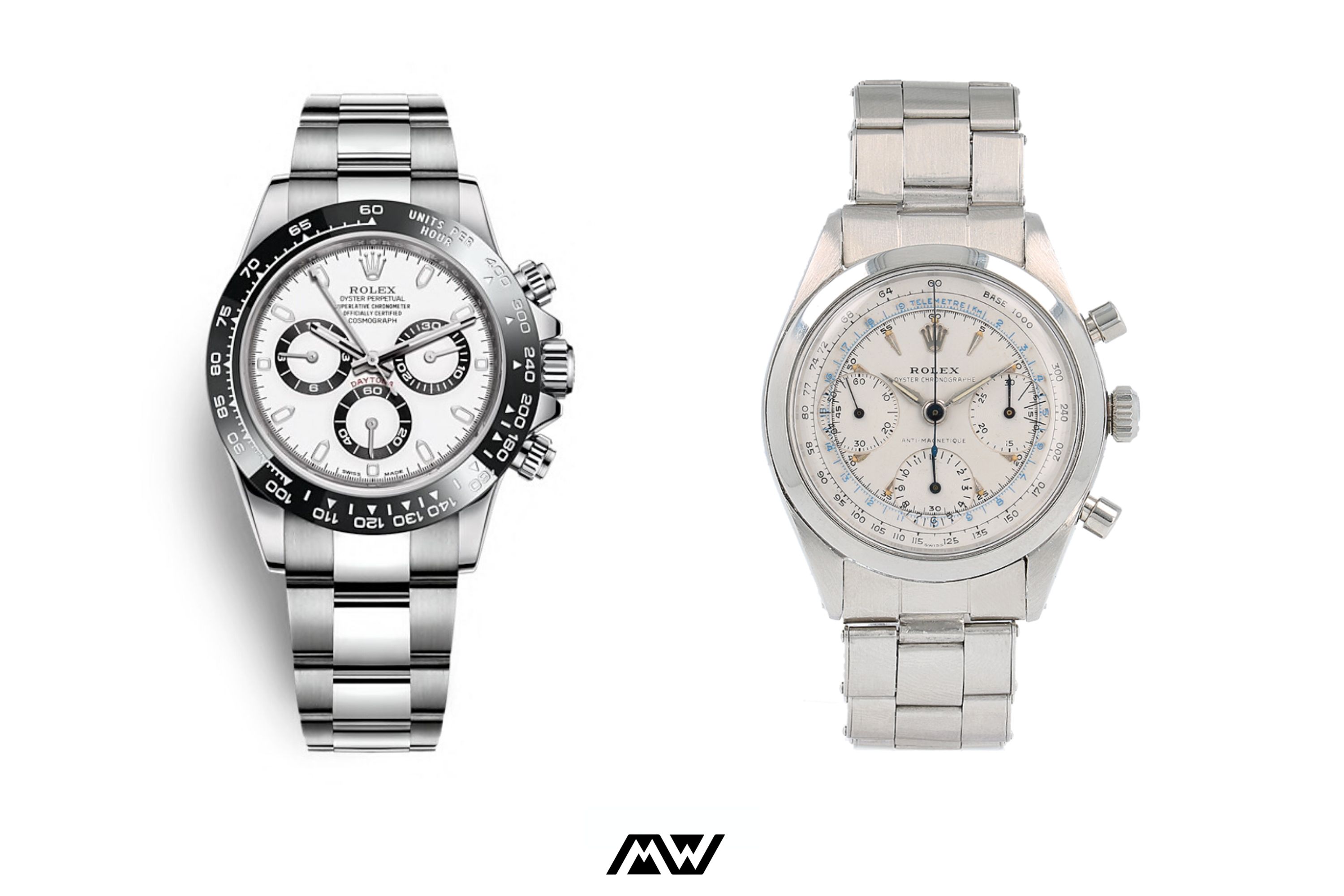 The Rolex Daytona is one of the most legendary models from Rolex. If not the most legendary. Vintage Daytonas are highly sought-after by collectors, and fetch high prices at auctions. In fact, the world’s most expensive watch ever sold at auction was the Daytona of Paul Newman, which sold for $17.8 Million.

The stainless steel Daytona is today themes sought-after modern piece from Rolex, which has made it only accessible from official Rolex retailers to VIP customers, or those who patiently wait for years.

But initially, the Daytona wasn’t a big success. In fact, the opposite. Stories have been told about how Rolex retailers in the early days of the Daytona offered them complimentary when buying certain other watches. Part of the reason for this was that other manufacturers had established themselves as experts in making chronographs, including Zenith and Breitling, so Rolex initially fell a bit short with its early chronographs. From a business standpoint, they were big failures, but perhaps necessary, as they would, in hindsight, carve the way for the immense success of the Daytona.

The Rolex Daytona got its name from the race track carrying the same name in Florida. In 1902, the first automobile races were arranged on the beach of Daytona, and you can say that it was here that automobile racing started. Several of the famous racing drivers at the time, including Sir Malcolm Campbell of Great Britain wore Rolex watches. In 1931, Campbell wrote a thank-you letter to Rolex in 1931, telling that he was impressed with the watch’s performance.

1962 was the first time Rolex became the official timekeeper of the Daytona race, which came to become the start of a long (and undeniably important) relationship. In the same year, Rolex named its chronograph the ”Daytona” to celebrate the relationship. 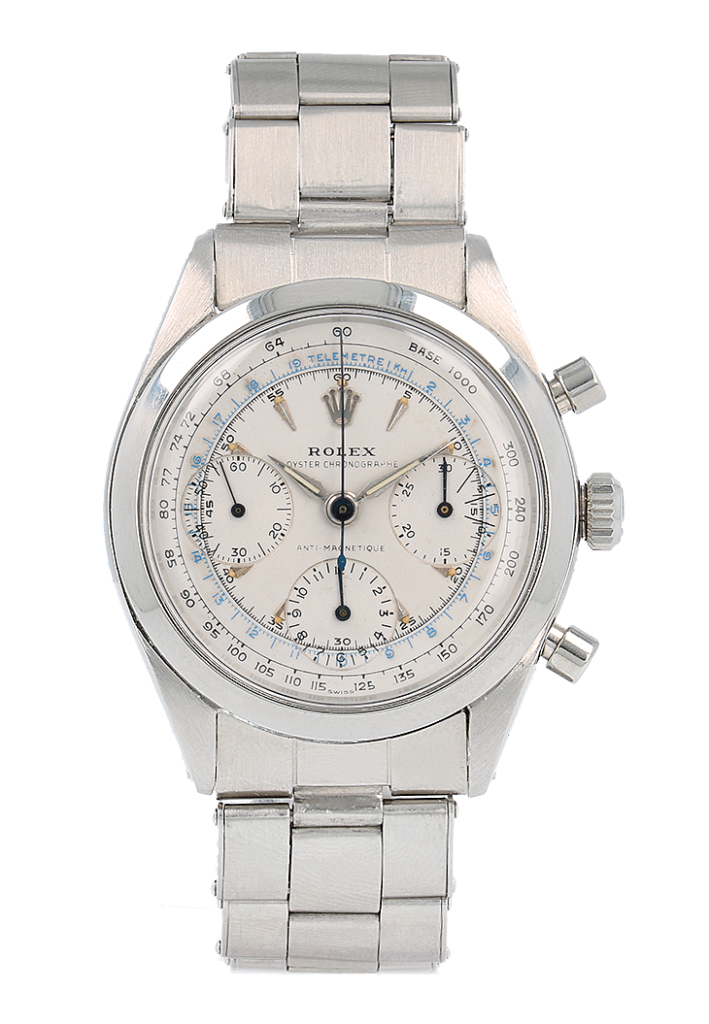 Rolex released a chronograph reference 6234 in 1955 which didn’t carry the name Daytona. But this watch is considered a precursor of the Daytona.

The model would come to heavily influence the successor, which was established as the first Daytona model. The model was discontinued in 1961 and approximately 500 pieces were made.

Whilst the 6234 would ultimately lead to the Daytona, the reference 6238 is often referred to as the ”pre-Daytona”. It was rather similar to the 6234 but featured a few important visual differences. 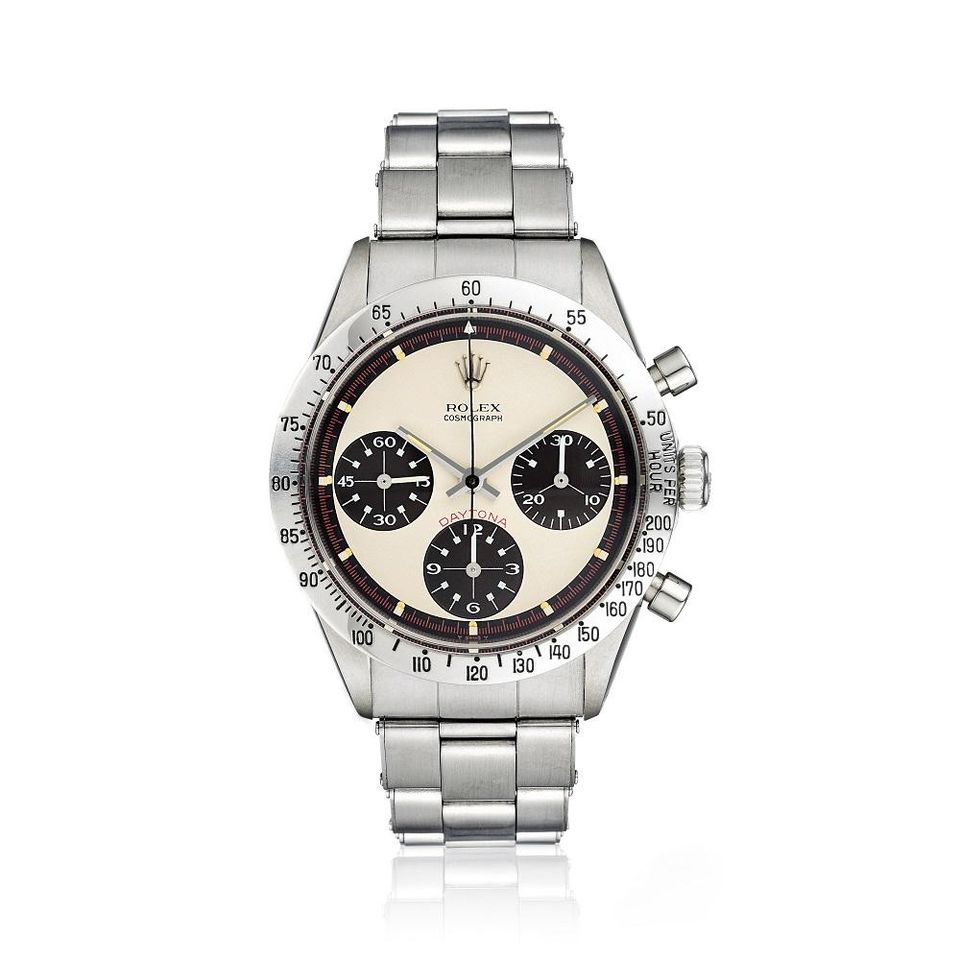 Rolex released the first Cosmograph in 1963 under the reference 6239. As you know, the Rolex Daytona today is known as the Cosmograph Daytona. It was with this reference that the model really started turning into what we today see as a Daytona, featuring the tachometer scale engraved on the metal bezel.

It was for this model that Rolex finally started adopting the Daytona name for the model, although at first referred to as the ”Le-Mans”.

It would take until 1965 that the Daytona name would appear on the dial.

This reference became the first waterproof chronograph and featured screw-down push-pieces. As such, it also featured the text ”Oyster” on the dial.

This reference was similar to the 6240 but this time, it did not have screw-down pushers. 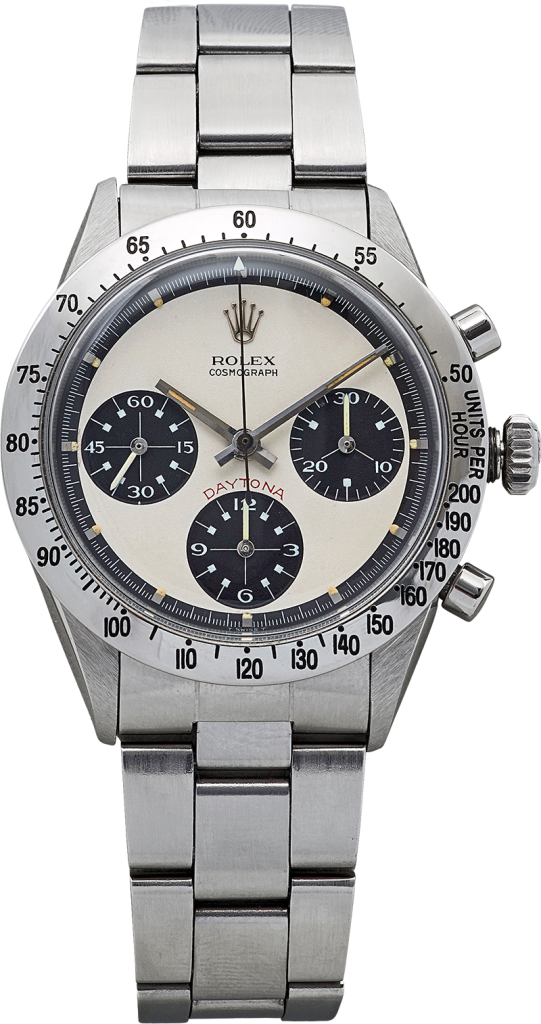 The Rolex Daytona reference 6262 is one of the rarest Rolex watches from Rolex ever made. The reason? It was only in production for one year, in 1970.

The reference 6262 was not a big seller, and this is one of the reasons why it was phased out so quickly. It was also only a transitional model. Due to its short production period, the production numbers are highly limited, making it one of the rarest and sought-after vintage Rolex watches.

The Rolex Daytona reference 6264 is, like many other early Daytona examples, extremely rare and sought-after. This is the watch that has come to be known by collectors as ”Paul Newman”, as the actor and race car driver frequently wore this reference. But note that this refers to a particular dial, and several (6) Daytona references did feature the Paul Newman dial.

It was in production for only a few years in the 1970s, and its release coincided with that of the reference 6262.

Early versions of the Rolex Daytona ref. 6263 did not include the Daytona signature on them—only Cosmograph.

Of those Daytonas featuring a Paul Newman dial, the reference 6263 is the most sought-after.

The Rolex Daytona reference 6265 is an ”Oyster”, which means screw-down crown and pushers. The reference was released in 1971 and has a steel bezel as opposed to some other references that had a black acrylic bezel. It has a 37mm case.

If other Rolex Daytona watches are rare, this is an immensely special one. The reference 6269 is made in full 18k yellow gold. It is an Oyster with a screw-down and pusher. An early vintage Daytona made in full yellow gold is indeed extremely rare due to their limited group of buyers at the time.

The Daytona reference 6270 is one of the most expensive Daytona ever made by Rolex. As if a full gold Daytona was not enough, this reference has a pavé diamond-set dial, and the numerals are sapphires, the bezel is set with baguette diamonds, and the sub-dials are purple! Only eight pieces were produced, all made especially for his Majesty Qaboos Bin Said of Oman. 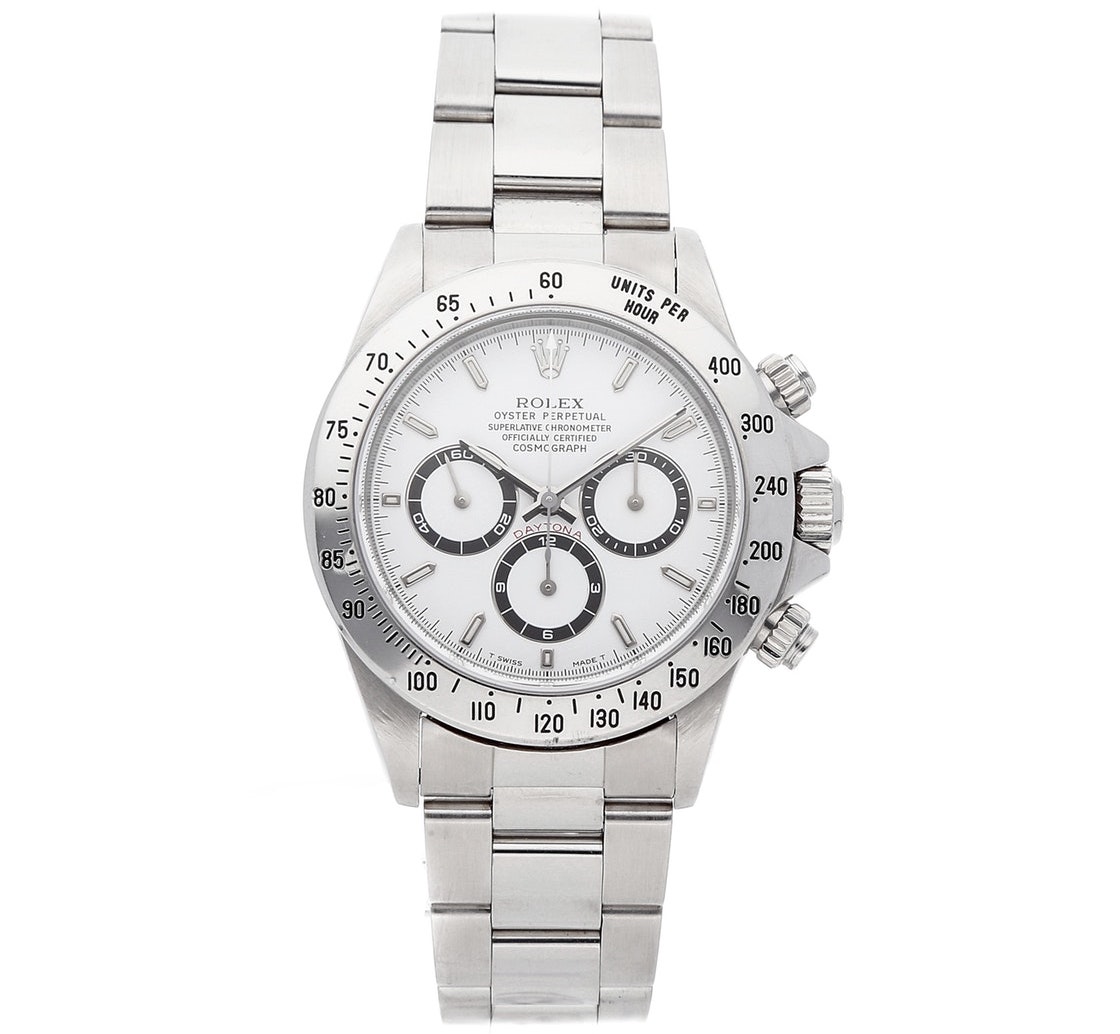 The Rolex Daytona 16520 marked a new chapter for the Daytona. This new generation is what is known as ”Zenith Daytona”. As the name reveals, the watch is powered by a Zenith caliber – modified by Rolex. Rolex modified the movement so heavily that they gave it its own name – caliber 4030.  Its base is one of the most legendary chronograph movements in the world – the Zenith El Primero.

What is special about this watch is that it marks the first generation of automatic Daytonas. The reference 16520 was released in the end of the 1980s.

The Rolex Daytona 16523 is a two-tone version of the Zenith Daytona, meaning it is made in gold and steel. It is powered by the caliber 4030, based on the legendary Zenith El Primero caliber. 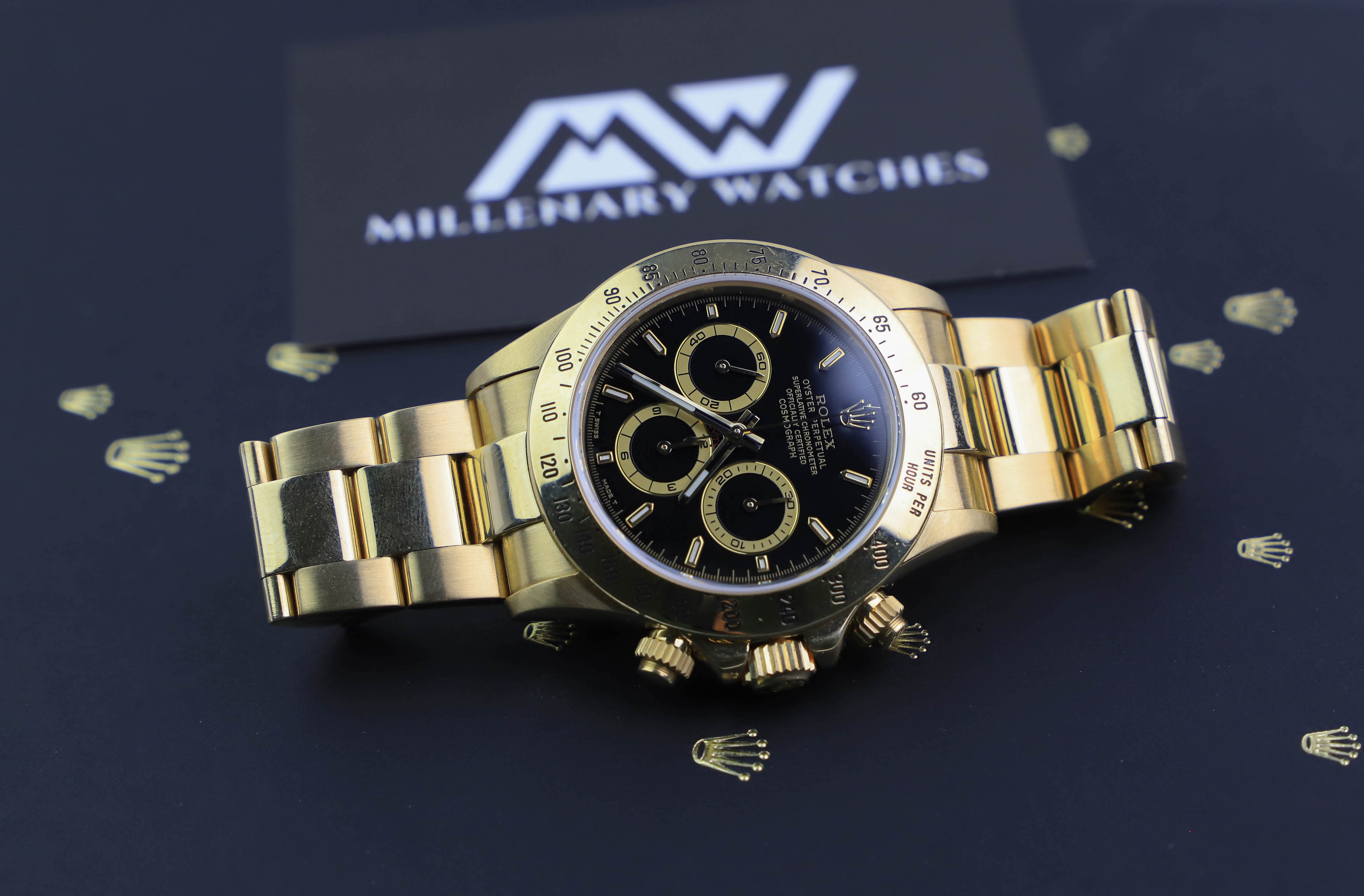 The Rolex Daytona 16528 takes the luxuriousness of the Zenith Daytona one step further and is made in full yellow gold. Apart from that, all other things remain the same.

The Rolex Daytona reference 16518 is also a Zenith Daytona, but instead of being fitted on an Oyster bracelet, it was delivered on a leather strap. The case is made in full yellow gold, but the leather bracelet allows it to be more discreet and toned-down.

The Rolex Daytona reference 16519 is yet another version of the Zenith Daytona, but now featuring a case made in 18K white gold, and fitted on a leather strap.

The Rolex Daytona reference 16520 marked yet another new generation of the Daytona. This time presented, for the first time, with an in-house Rolex caliber. Rolex named the movement caliber 4130. This new generation of Daytona watches was released in 2000. The introduction of an in-house chronograph caliber was a major achievement for Rolex because it meant that Rolex could finally claim that all of its watches featured in-house calibers.

The Rolex Daytona reference 116523 is a two-tone version of the Daytona 116520. The difference is that it is made in gold and steel instead of full steel. 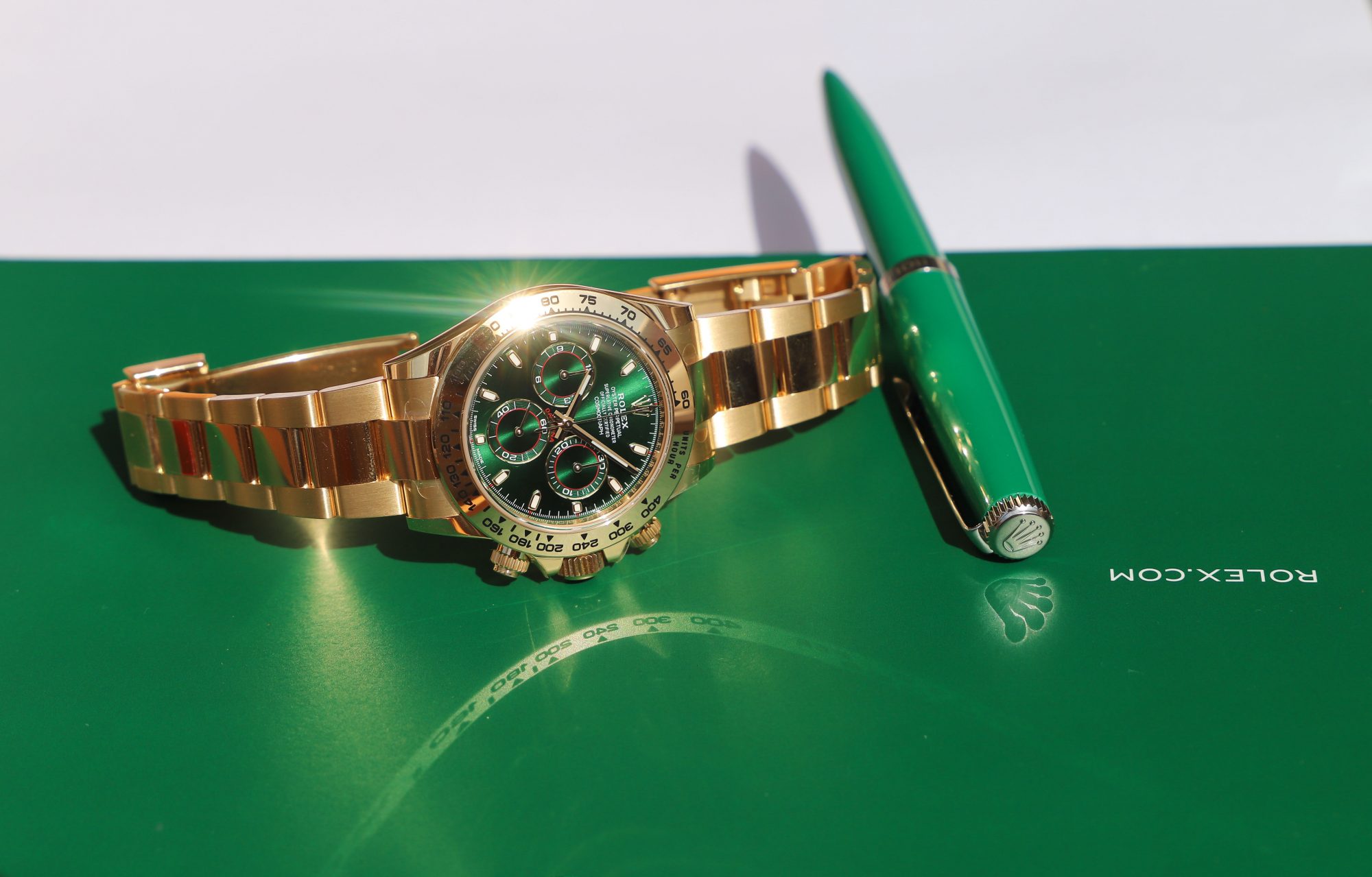 The reference 116528 is a full gold version of the in-house Rolex Daytona. Powered by the caliber 4130, but made in a bold yellow gold case and with a yellow gold bracelet.

The Rolex Daytona 116589 is a rare and unique variant of the Rolex Daytona 116520. It is presented on a leather strap, but most importantly, it features an 18K white gold case and a diamond bezel. It is available with a number of different dials, but most commonly, it can be found with diamond indices.

The Rolex Daytona 116509 is made in full white gold and is fitted on a white gold bracelet.

The Rolex Daytona reference 116505 is made in full 18K rose gold and features a full gold bracelet. It is powered by the in-house Rolex caliber 4130.

The Rolex Daytona 116515 was initially released on a black alligator strap, but Rolex discontinued this configuration and instead changed it to its new innovation Oysterflex – a comfortable rubber strap that adds sportiness to this watch.

The Daytona reference 116599 is a rare and unique version of the Daytona. It is made in 18K gold and is available in a number of different configurations. These primarily relate to the gem-setting of the watch, including, amongst others, diamonds, and sapphires. Due to the expensive nature of this watch, it is uncommon and not often discussed. 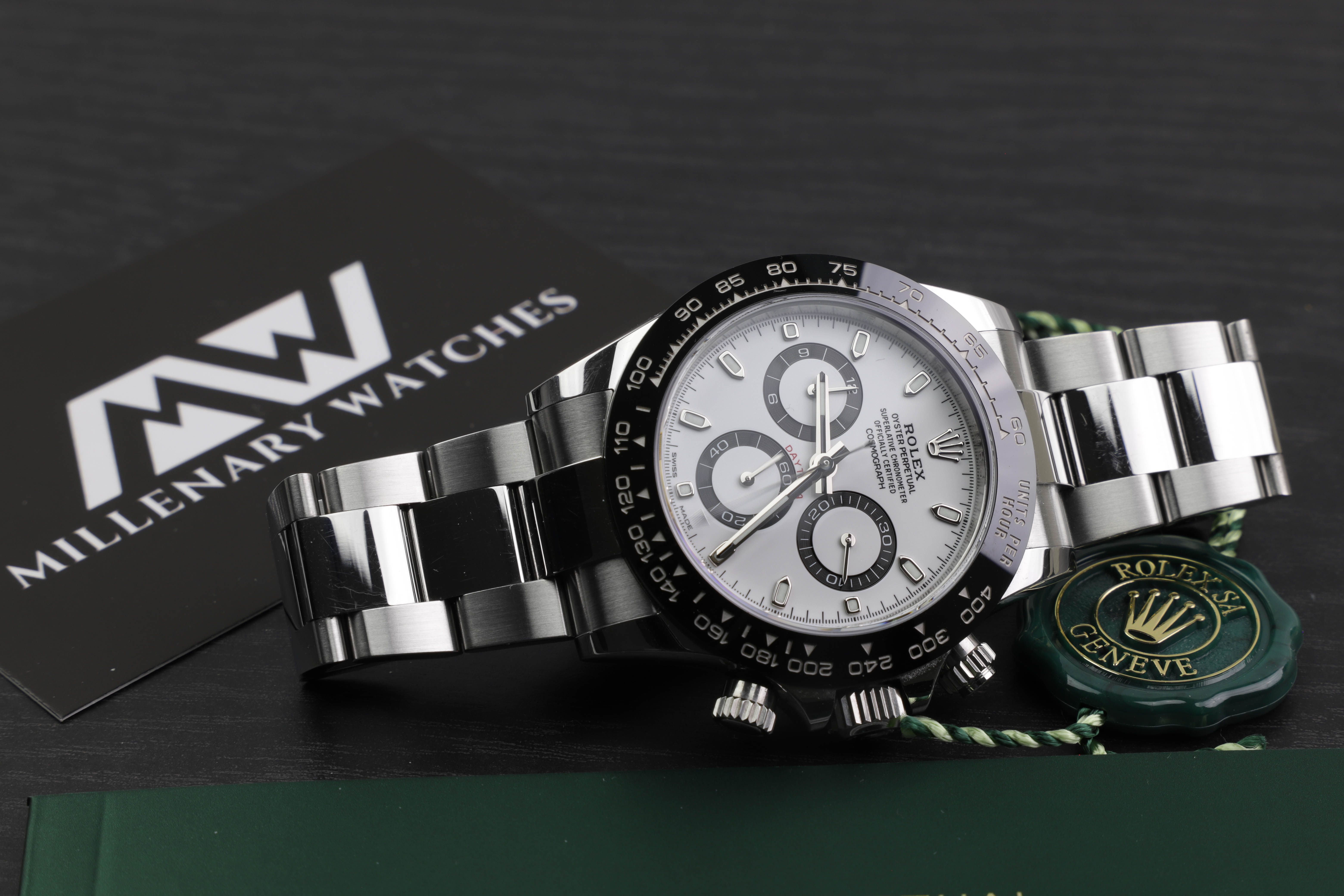 The Rolex Daytona 116519 has been available in a number of different iterations. The most recent include a ceramic bezel and an Oysterflex bracelet, whereas the early versions include an 18K white gold bezel and leather strap.

The Rolex Daytona reference 116595 is an extremely rare and limited modern Rolex watch, not part of Rolex’s official catalog. It is reserved for top VIP customers, and in order to get the opportunity to buy one from an official retailer, Rolex has a particular application process in place. The watch has a gem-set bezel, featuring gemstone in different colors, creating a rainbow effect.

The lugs of the watch are diamond-set, and the markers also have rainbow-effect-applied baguette gemstones.

Just like the Daytona 116515 and 116519, this watch was originally available with a leather strap. The most recent iteration comes on an Oysterflex rubber strap and features a ceramic bezel. The case of this watch is made in 18K yellow gold.

Over the course of their production, Rolex has made variations of the above models. Many of these models were available with different dials, whilst retaining the original reference number. This is the case for many vintage Daytona watches, where the dial differences were small and subtle, such as having the dial printing placed on different places on the dial and also having varying dial differences. Furthermore, it also applies to more recent Rolex Daytona watches, many of which are often available with an array of different dials.