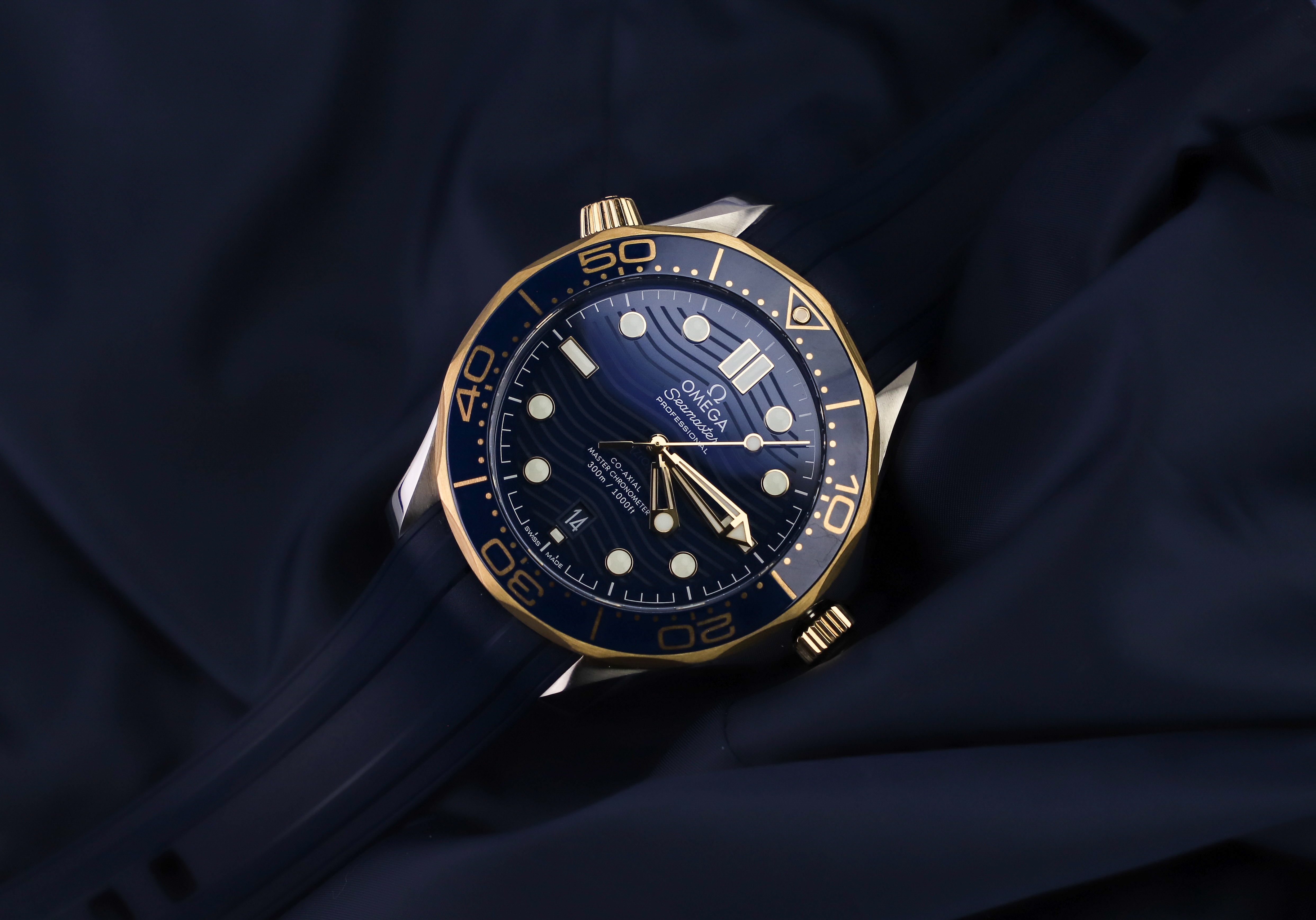 The new Seamaster Diver 300M range from Omega includes many different versions of the model. In writing moment, Omega has released 15 watches but I am certain that we’ll see more versions launched in the near future. 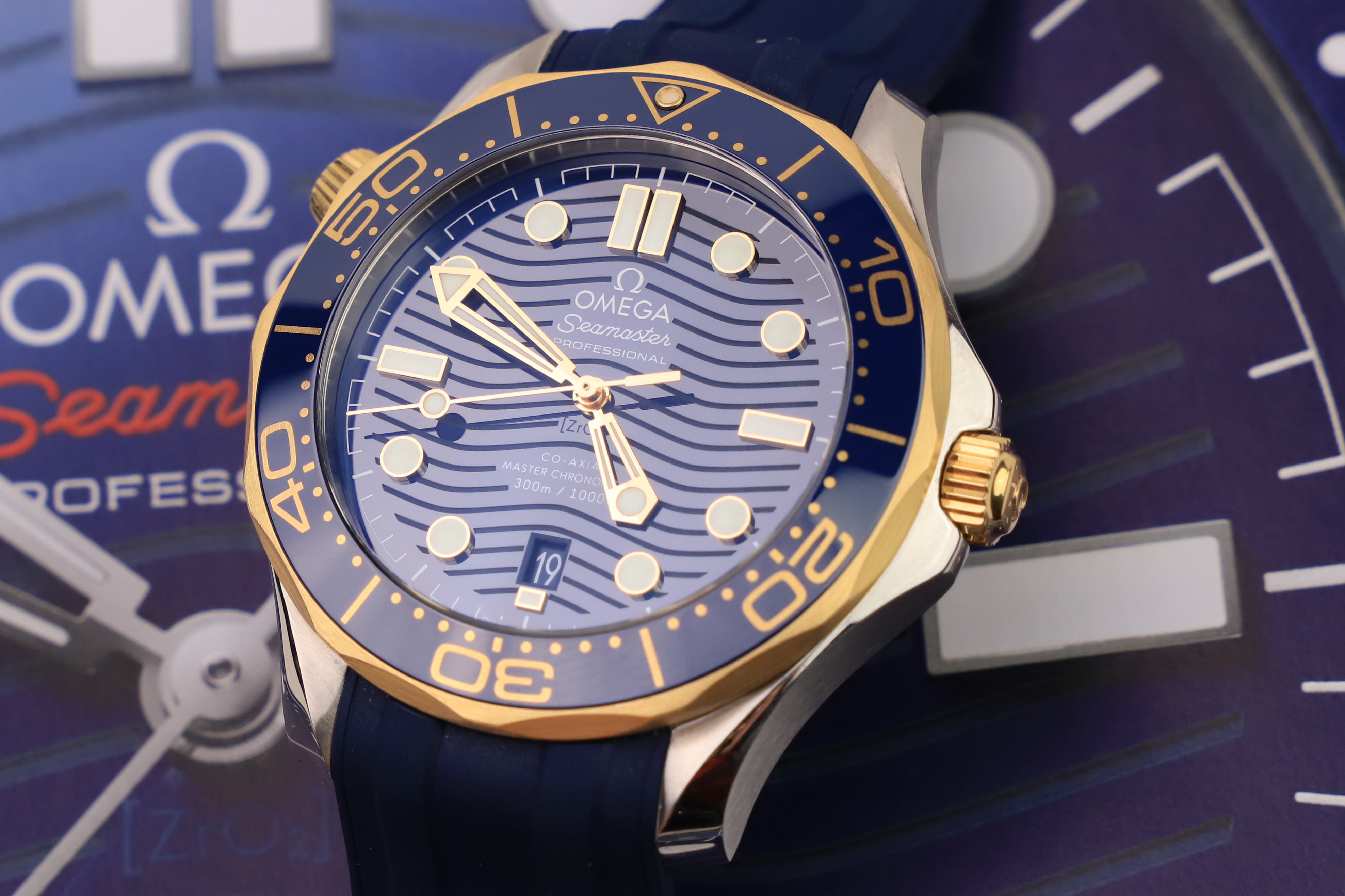 As mentioned, the Omega Seamaster Diver 300M was launched in 2018. More specifically at Basel.

”Among Omega’s lineup of divers, the Seamaster Professional seems the least likely to see time on a dive boat. The Seamaster 300 Master Co-Axial is a throwback, classic diver recalling the great divers Omega built in the 1960s, the Planet Ocean is the sporty modern luxury tool, and the strange but mighty Ploprof belongs nowhere else but strapped over a wetsuit sleeve. The Seamaster Professional, on the other hand, started life as a shiny accessory made to slide under Pierce Brosnan’s cuff in the mid-90s when James Bond was a well-coiffed dandy. It’s the archetypal “dress diver” – the exact opposite of a tool watch, with a glittery multi-link bracelet, scalloped bezel, skeleton hands, and stylized wave dial. Sure, if 007 needed to do a submarine lockout in full dinner attire, the watch could take it, but I never had the impression that this was a watch made primarily for slinging scuba tanks in the hot sun.”

While the new Omega Seamaster is, in theory, a sports watch meant to be able to take a beating and manage great depths, there will not be a lot of people who will use it for serious diving.

While it is a dive watch at its core, the modern redesign makes it more of an elegant and exclusive everyday dress watch for the person who wants to feel like James Bond or add some sporty elegance to their outfit. 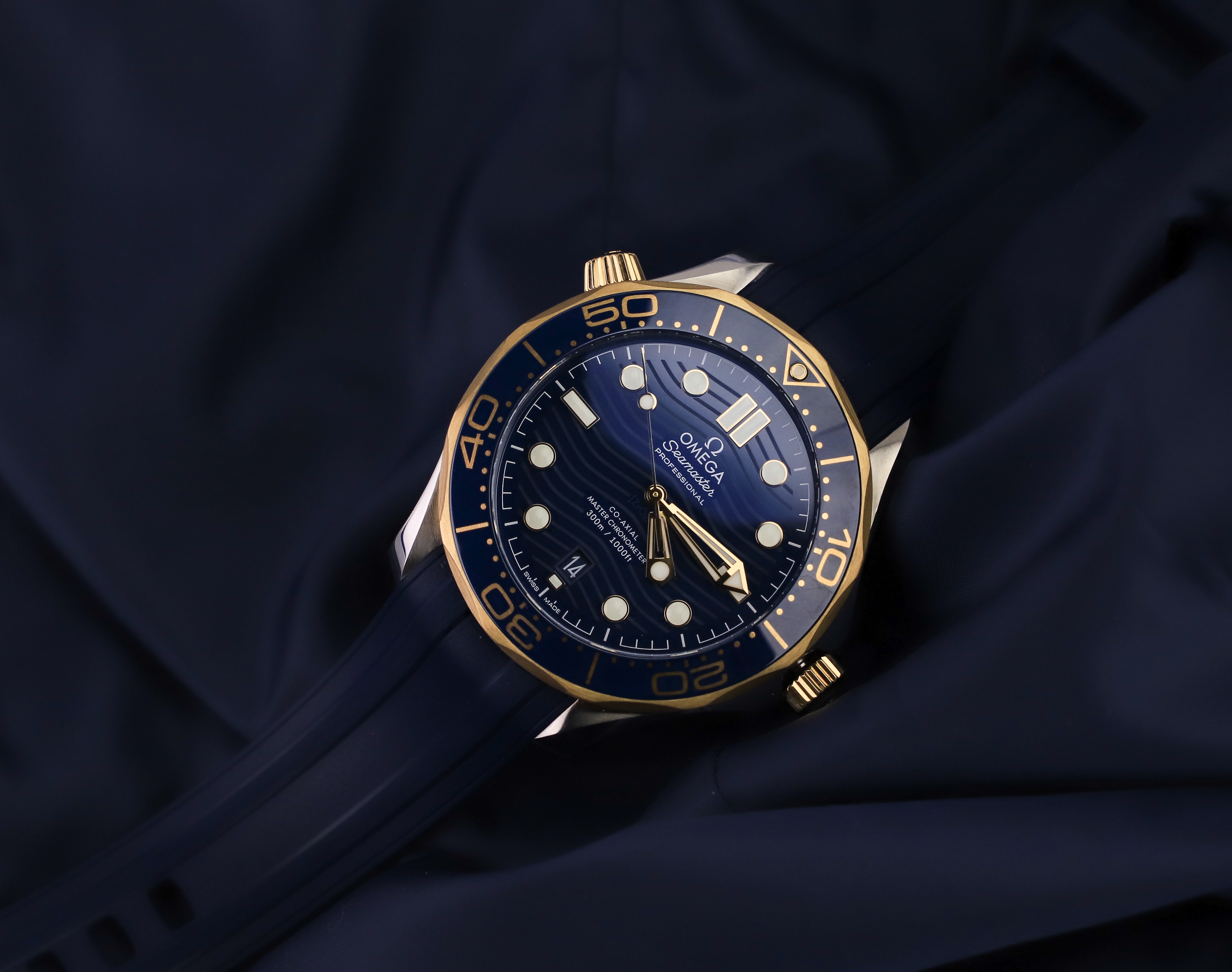 Yes, the Omega Seamaster is a Diver’s watch, but the new updates to the watch actually make it less sporty than the predecessor, and this can be seen as a conscious decision by Omega, which realizes that people don’t really use dive watches for serious diving anymore. And if they need a serious dive watch, there’s always the PloProf.

Over the course of time, Omega has released a number of iterations and versions of the Omega Seamaster, but while the previous generation was quite a popular piece, there were some design elements to the watch that needed an update, and there were design elements on it that just felt a bit… outdated.

This particular watch is the gold and steel blue version, featuring a rubber strap. This is if you feel that the now elegant Seamaster isn’t elegant and dressy enough. 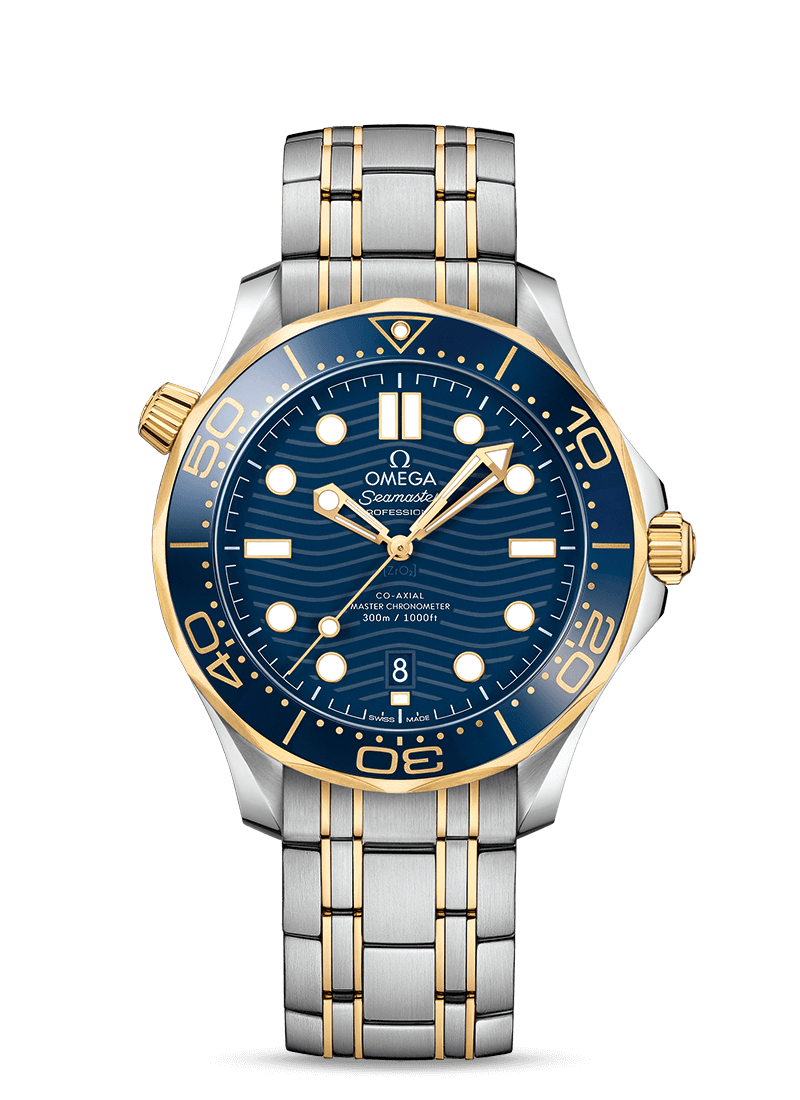 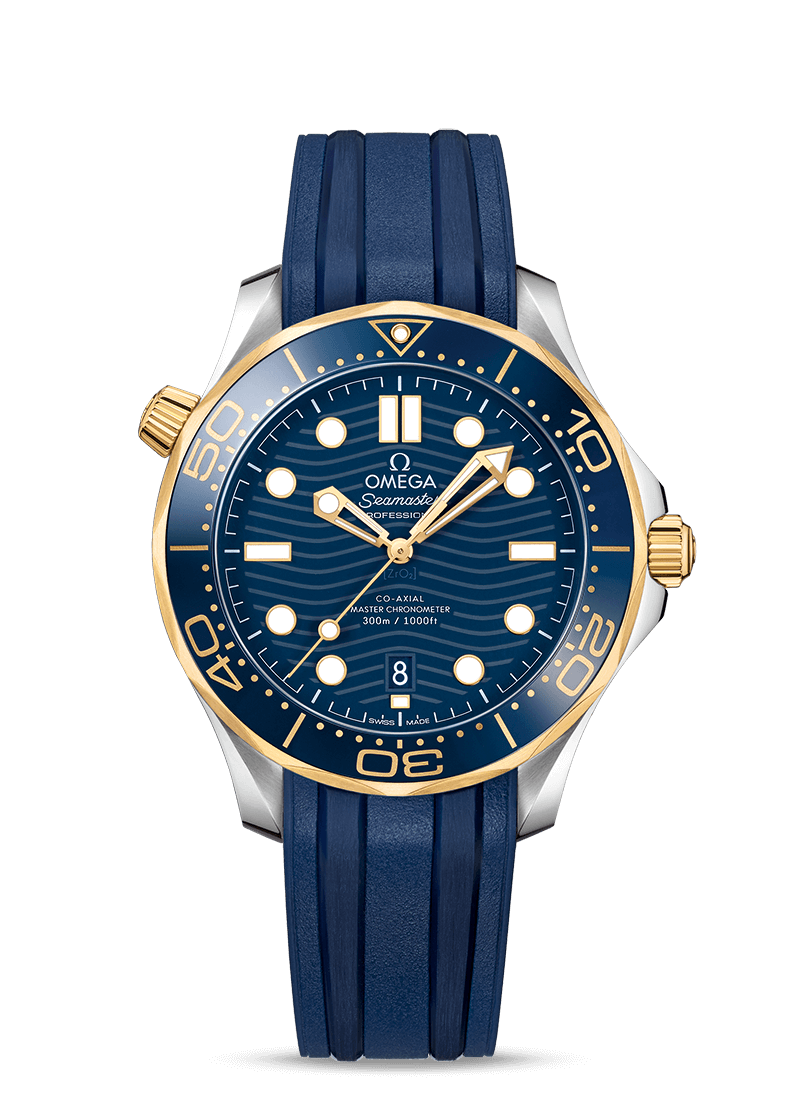 The Omega Seamaster versions are available both with a steel bracelet or a rubber strap. So if you’re a person who prefers straps before bracelet, you have that option at a lower cost. Because the bracelet is actually quite pricey. And the difference in price between the rubber and bracelet versions become especially clear when comparing the gold and steel versions ( like the model we’re looking at today). In fact, the difference in price is actually huge. 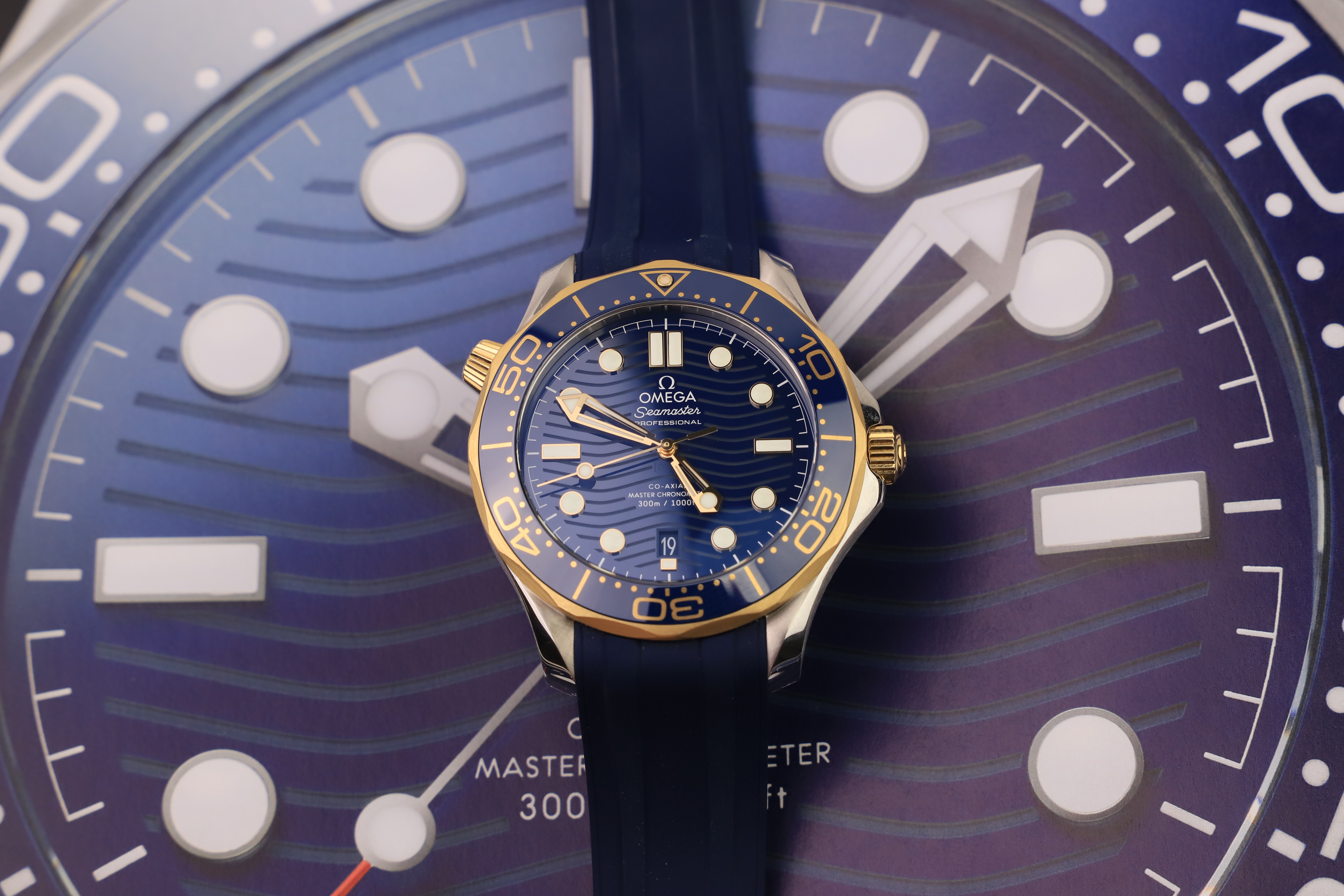 The retail price for this watch is roughly 6K euros. On the contrary, the bracelet version is roughly 8.9-9K euros. That’s a huge price difference only for a bracelet. And so if we’re going to discuss price this early in the article, it will make sense that when people have the option to buy the watch on a bracelet or rubber (which you can’t do in the same way with, say Rolex) and the rubber version is significantly more affordable, you may assume that a lot of people will choose that option.

But of course, the vast majority of people who buy the new Seamaster Diver 300M will choose the full steel version, and here, the difference in price between the versions is a mere 100 euros.

And if we are allowed to be a bit critical, the gold in the gold and steel bracelet is certainly not worth 2.800 euros. But frankly, the cost of precious metal watches rarely reflect the actual material value when compared to steel versions.

The new generation Seamaster is Omega’s attempt to outshine Rolex’s Submariner, and while it is up to you to decide which of them is the winner, it’s obvious that Omega is working hard to make people choose the Seamaster over the Submariner because they really are their biggest competitors. They both have 300m water-resistance, they’re both chronometers, both offer 5-year warranty, both have ceramic bezels, and so on..

Now, let’s look at the specifications of this watch.

The new generation is still very much a Seamaster, and while it has been redesigned a lot more than just a few subtle differences, it is instantly recognized as one.

The case shape is very similar to the previous generation, with the iconic ”twisted” lugs, which combines a polished and brushed surface. A big difference from the previous generation is that the case of the Omega 210.22.42.20.03.001 is now 42mm as opposed to the previous 41MM. And while I was a bit critical of Omega’s decision of making the watch even larger than it was, it doesn’t wear as a 42mm watch. At least not on the rubber strap. But while I think that they could have kept the previous size, the 42mm case doesn’t make the watch a bulky watch on the wrist – it just works. The watch also measures 13.6mm in thickness and 50mm from lug-to-lug.

The gold parts of the watch are the crown, the helium escape valve crown, the bezel, hands, and indices. The case is made in stainless steel.

And while this may not be a watch for everyone, there’s no question about the fact that the combination of blue and yellow gold is a perfect match (think a sunny day on the beach with azure blue water).

As for the hands, some people love the hands, others hate them, but the idea is that they are to offer great legibility, while also being a modern vintage-inspired element which pays tribute to the Omega Seamsters of the Royal Navy.

The 210.22.42.20.03.001, and particularly the bracelet version of this watch is a clear rival to Rolex’s two-tone Submariner 116613LB. Now, naturally, we should compare the two bracelet versions (Since the Rolex isn’t sold with a rubber strap) but you can see how the two watches are rivals.

The Omega Seamaster 210.22.42.20.03.001 features a scratch-resistant sapphire crystal and a unidirectional bezel in 18K gold. The ”insert” of the bezel is made of scratch-proof” ceramic. It has a screw-in crown in true dive watch fashion, and it is water resistant to 300m/990ft. Some people have complained about the scalloped bezel. It doesn’t feature a coin edge like the Submariner, which obviously compromises grip.

The case back of the Seamaster 18k is transparent (see-through case back), and this is an aspect where Omega differs from Rolex. Rolex has never (and most likely will never) use a see-through case back for its Submariner watches, simply because it does not really make any sense. A diver’s watch is made for diving, and therefore, it is a tool watch. But this is an interesting part where Omega still acknowledges the fact that people don’t really use them for serious diving, and the closest people get to water is when washing the hands or when swimming in a pool. 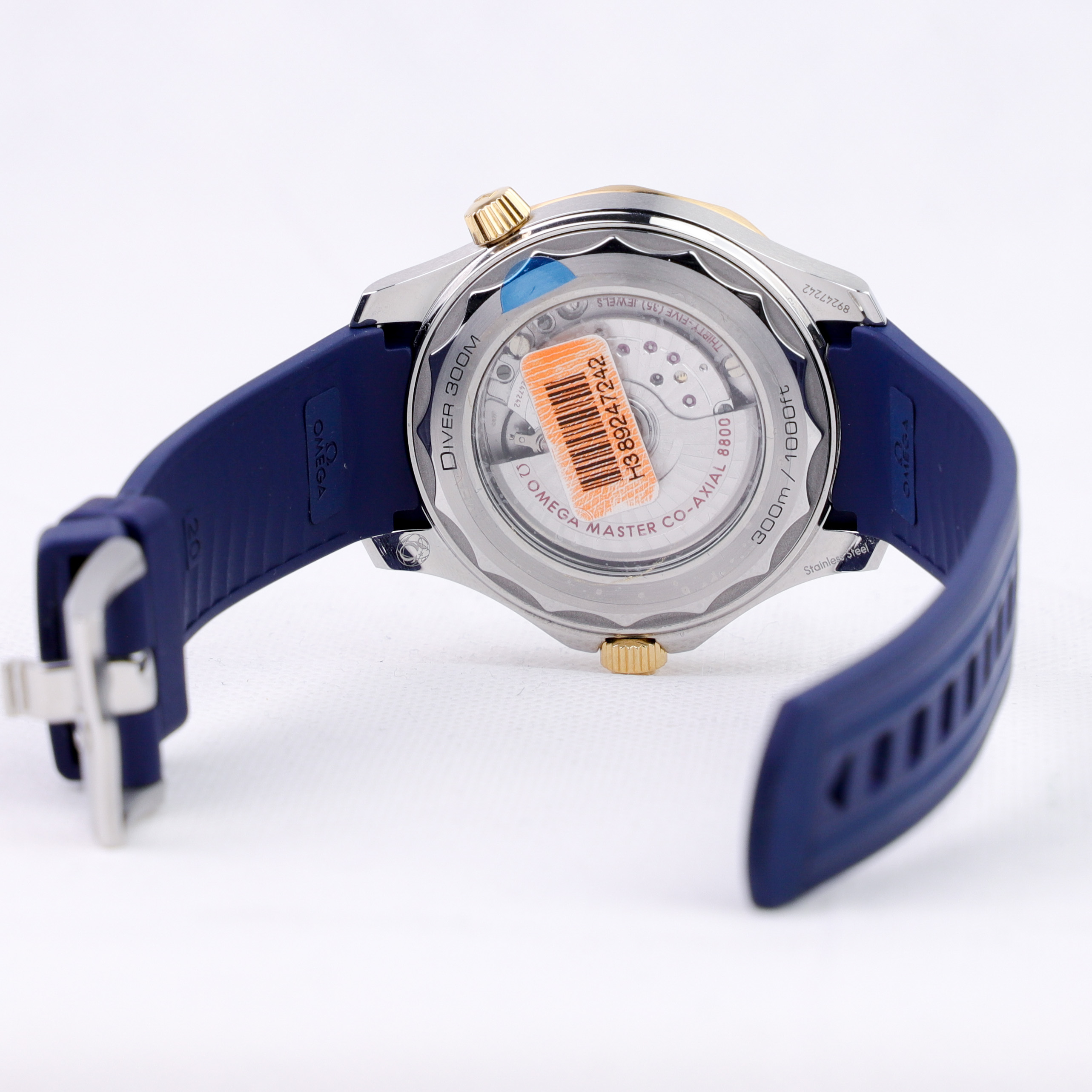 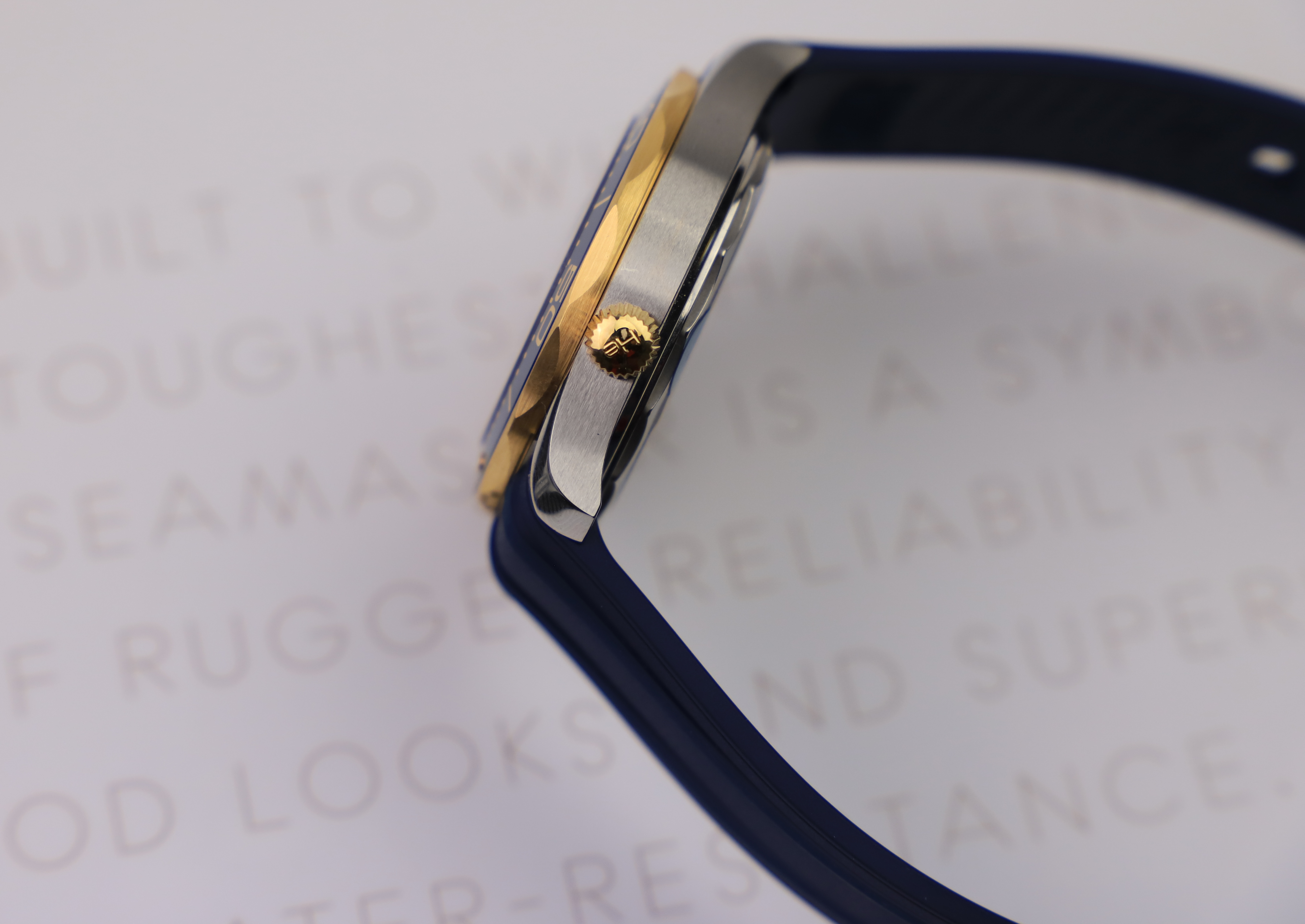 The rubber strap of the watch is actually quite comfortable. And as for the clasp, Omega has made a great tang buckle that secures the watch to the wrist and ensures that it doesn’t come loose. 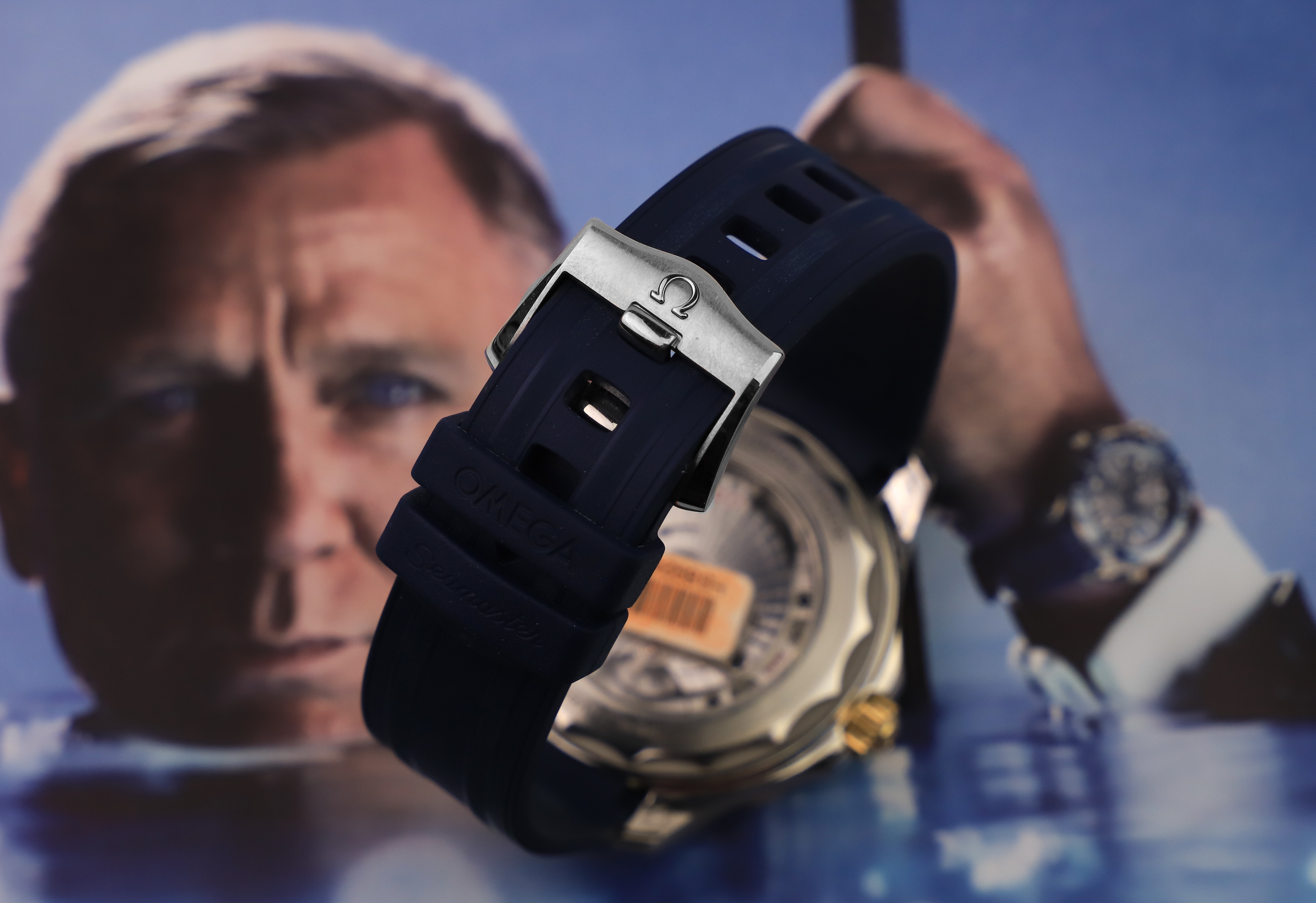 The strap is double ridged and vulcanized, has a great length, and it is a perfect balance between soft comfort and robust reliability. The strap is tightly fitted to the case 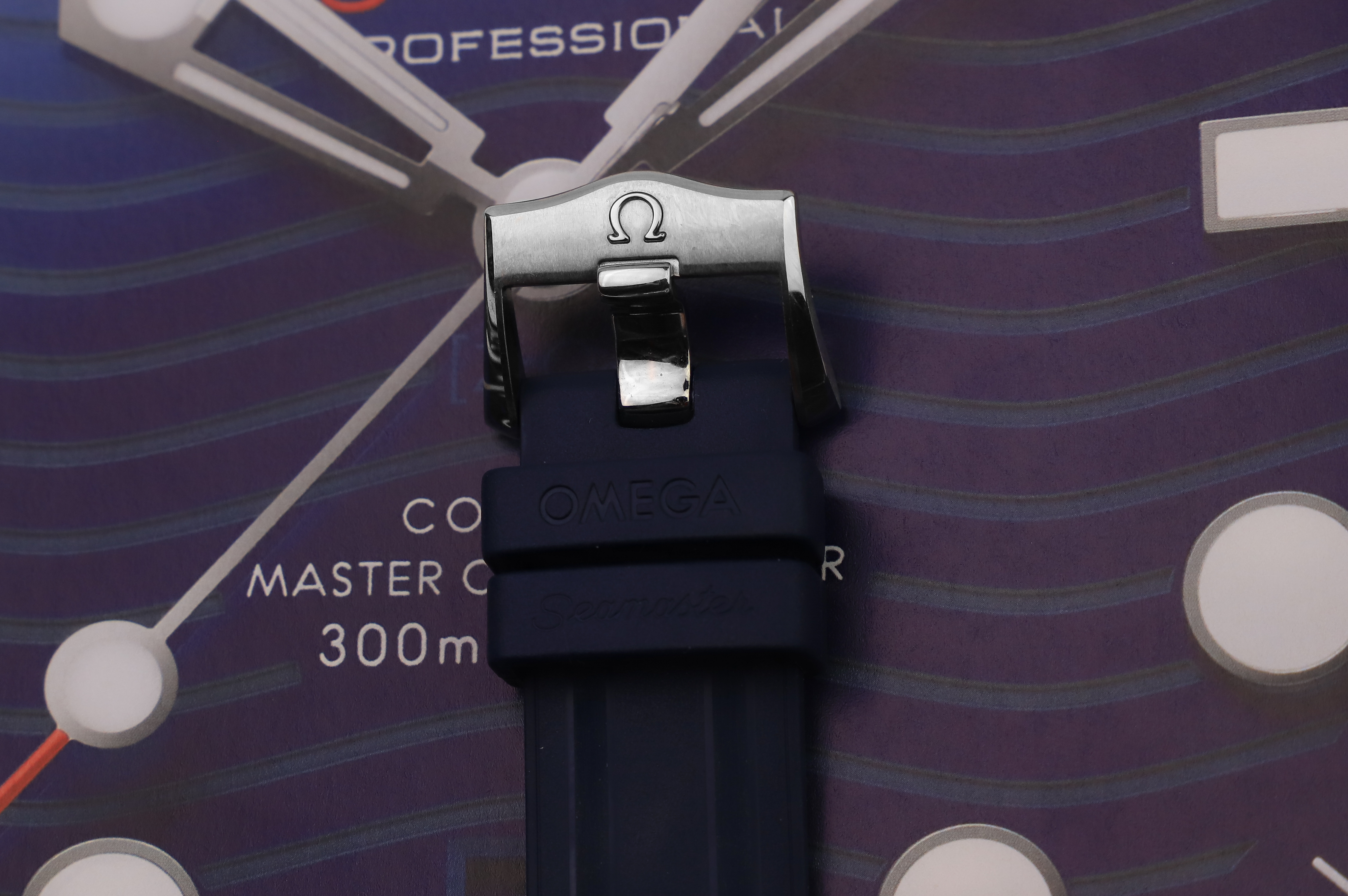 The watch has a high gloss blue zirconium oxide ceramic dial in blue. This material is written [ZrO2], and this is also engraved on the dial, right below the center hands. The dial is no longer blank like the previous version, but instead, it features engraved waves, which can be seen as an homage to James Bond’s Seamaster with wave dial from 1993-2011. 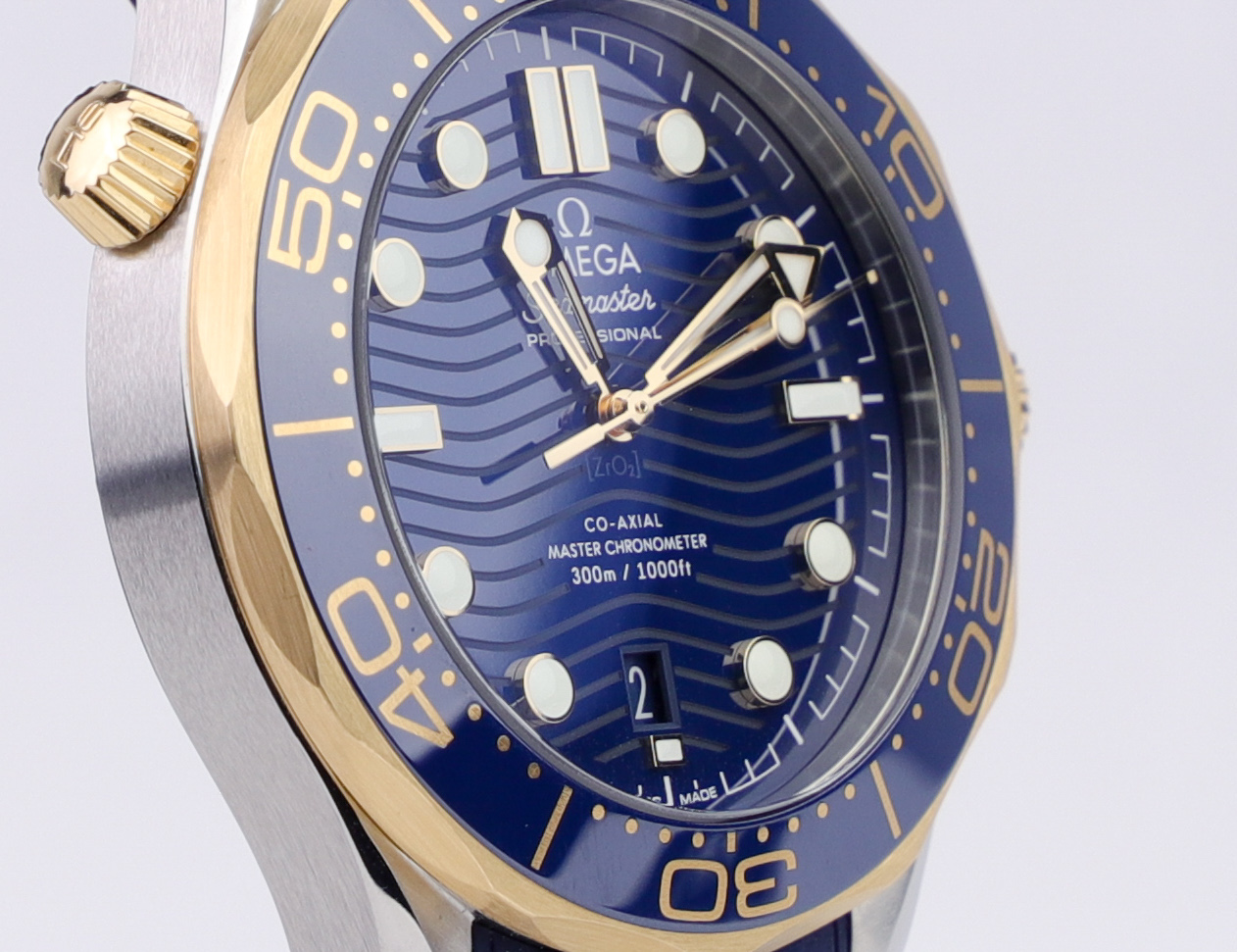 The Omega Seamaster 210.22.42.20.03.001 features applied polished 18kt yellow gold hour markers with luminous fill. On the dial, there’s a fine printed minute/seconds track. The hands are the classic skeletonized Omega hands, and for this model, they’re finished in 18K gold. The hands have luminous tips. The luminous markers are large, so you shouldn’t have an issue with legibility, however, some people mean that the dial is busy, and thus harms the legibility of the watch.

The watch also has a date window, located at the 6 o’clock position which can come in handy when you’re not diving (which is probably most of the time).

The movement of the Seamaster  210.22.42.20.03.001 is an interesting one, especially considering the see-through case back. All new Seamaster models feature the same movement.

The movement is the Omega Master Co-Axial caliber 8800 which ticks at 25,200 VPH. The movement contains 35 jewels & has a power reserve of about 55 hours. It features Omega’s Co-Axial Escapement and Omega’s Si14 silicon balance spring. The movement is also anti-magnetic – resistant to magnetic fields greater than 15,000 gausses. It features stop seconds and a quick-set date.  The movement features ceramic rotor bearings for long-wearing durability. Furthermore, the rotor & visible bridges are decorated with a unique arabesque wave design finish.

A huge change from the previous model is that the movement is now a METAS Certified Master-Chronometer. The movement is COSC certified Chronometer movement. The METAS certification tests water resistance, precision and magnetic resistance to 15,000 gauss.

There’s also a black version of this watch, the Seamaster 210.22.42.20.03.002. It is an identical watch, but the elements that are blue are instead black. The price is the same, but this is a great watch if you think that the blue color is a little too much, and don’t want to stand out as much. 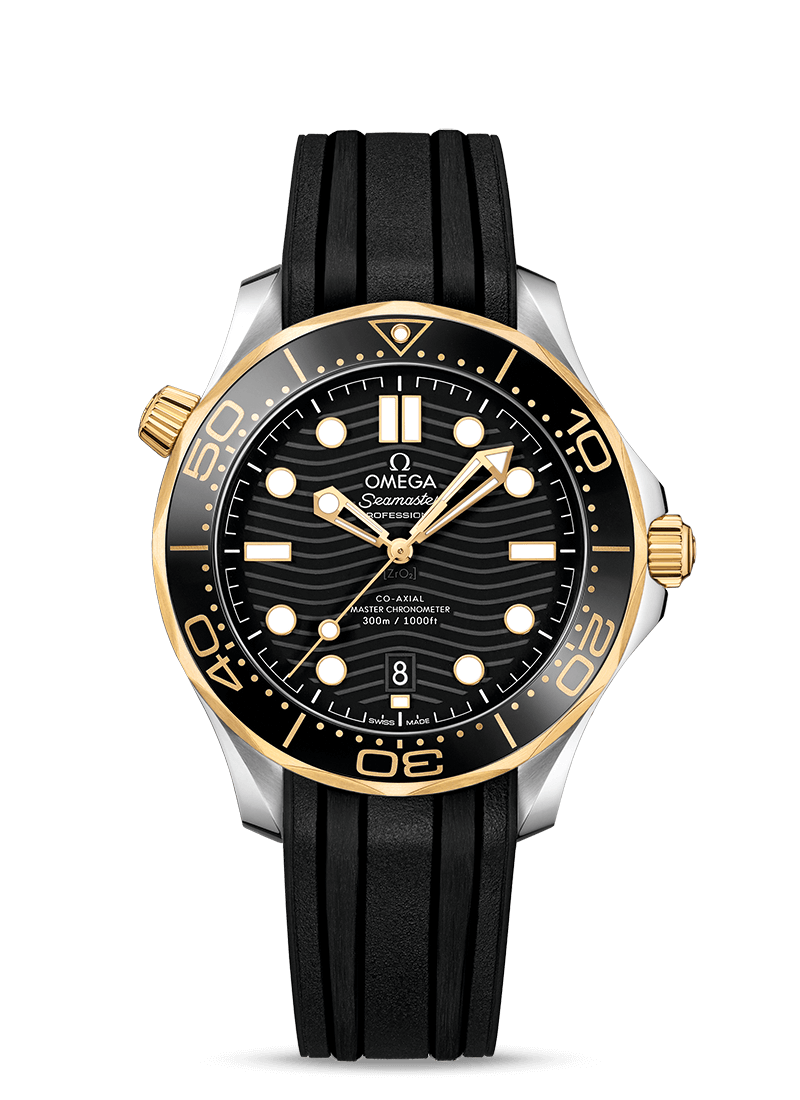