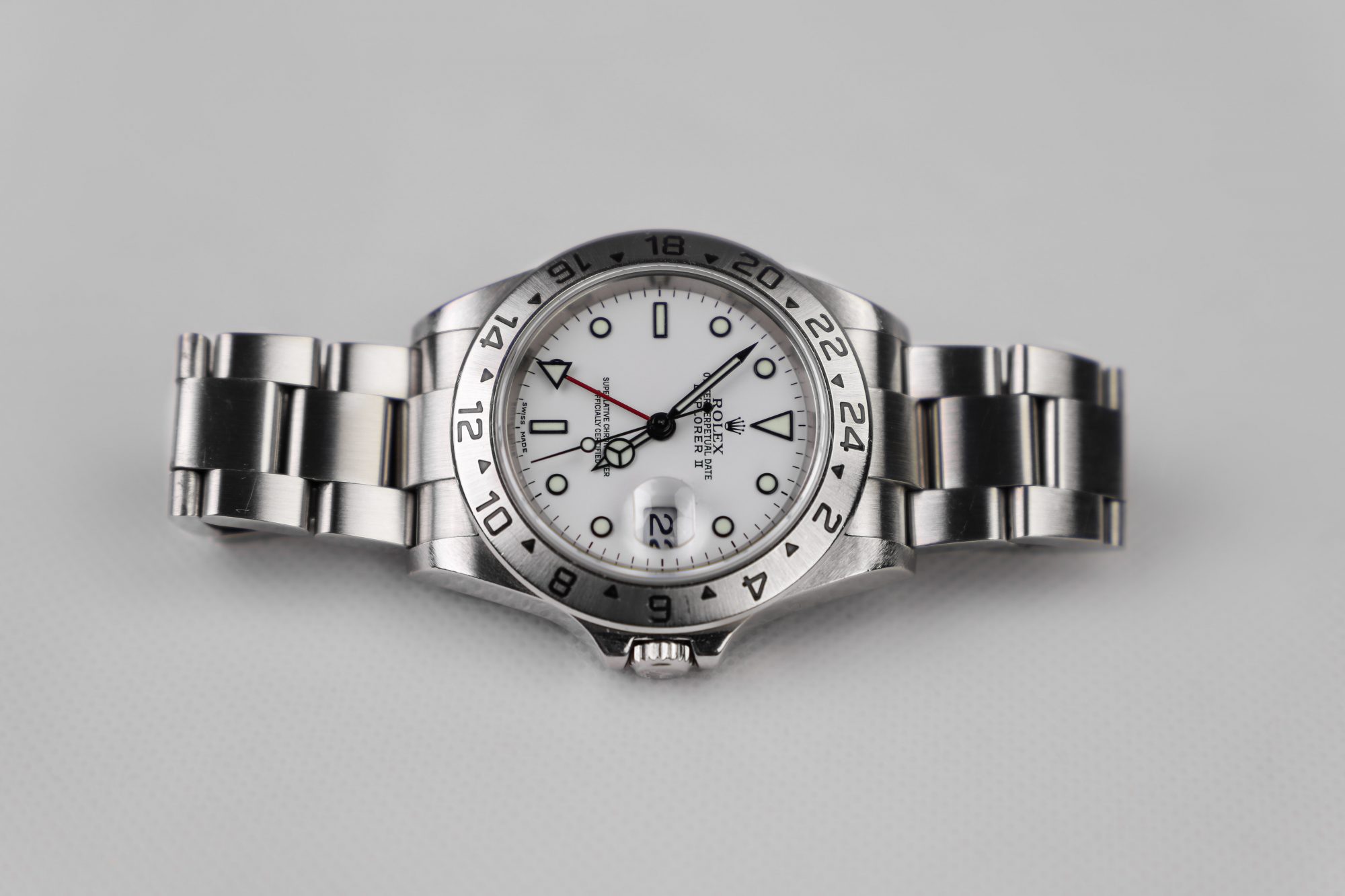 In 1971 Rolex introduced big brother to the already released Explorer 1, the new model featured a fourth hand, The GMT-hand, which together with the 24-hour bezel indicated an additional time zone, just like the GMT Master.

What perhaps first caught the attention of the eye was the striking orange GMT-hand which was a great contrast to the black matte dial. Although it hasn’t always been the most popular Rolex among their models, it has been an important landmark for Rolex. The semi-vintaged Rolex Explorer II reference 16570 has lately been highly sought after.

The model is quite interesting as it has undergone quite a few improvements since it was released in 1989 and discontinued in 2011. Let’s take a deeper look at the Rolex Explorer II reference 16570. 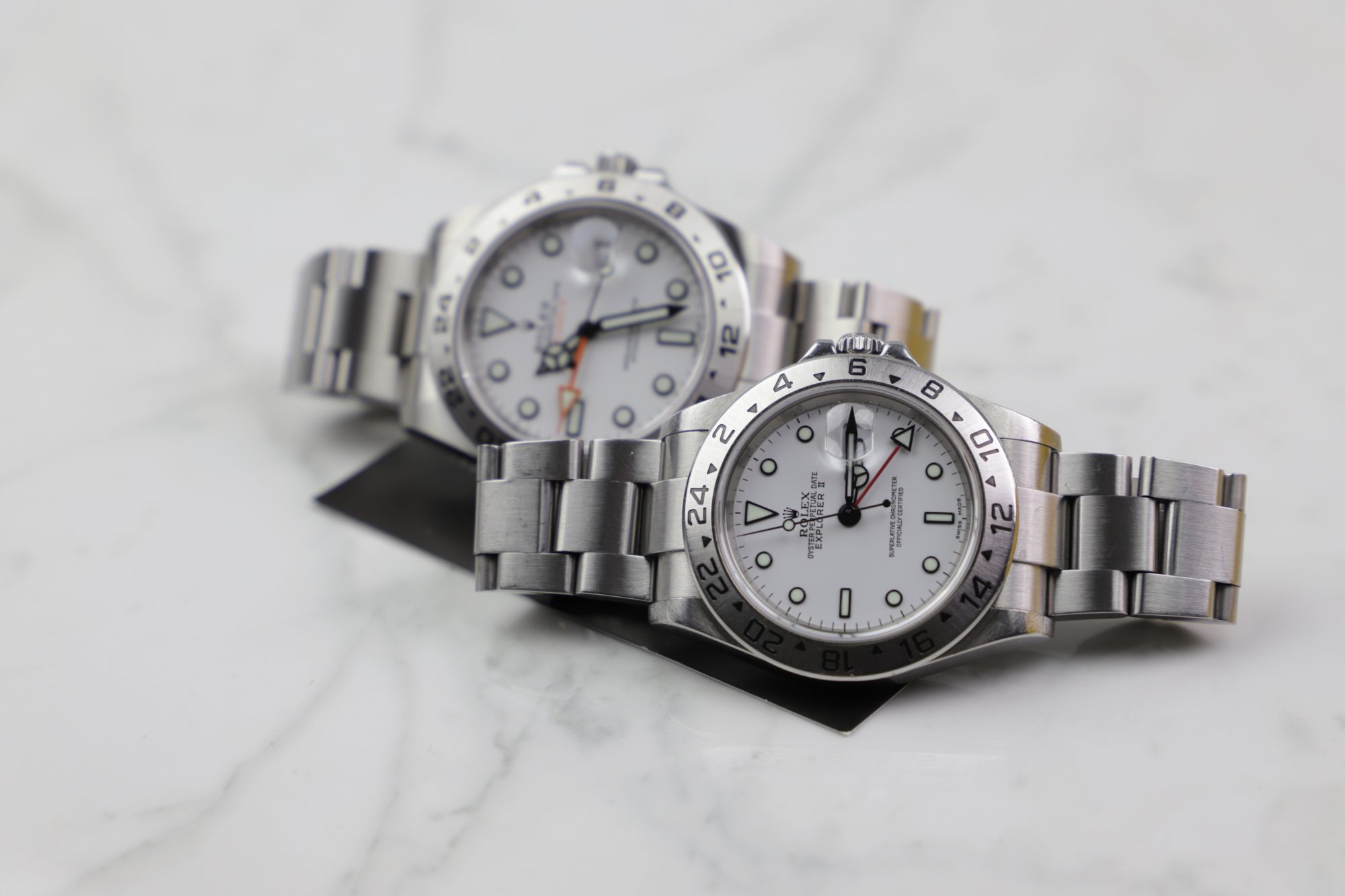 When announced in 1989 it was possible to purchase with either a white or black dial. The GMT-hand, which indicates a second time zone had a beautiful red striking color which is a great contrast to both the white and black dial colors. The model before the reference 16570 had the reference number 16550 and was a transitional model from the first reference released in 1971.

The white dial on the 16550 Explorer II had a malfunction which made the dial color age faster and become cream white, which is highly attractive to collectors. From Rolex’s perspective, the new white dial on the 16570, fortunately, did not have the color issue as the previous model, which didn’t cause the dial to age and lose its original color.

However, as tritium was used as the luminous material for the indexes, after some time, depending on what climate the watch was worn or stored in, the indexes will age and turn to a cream color. 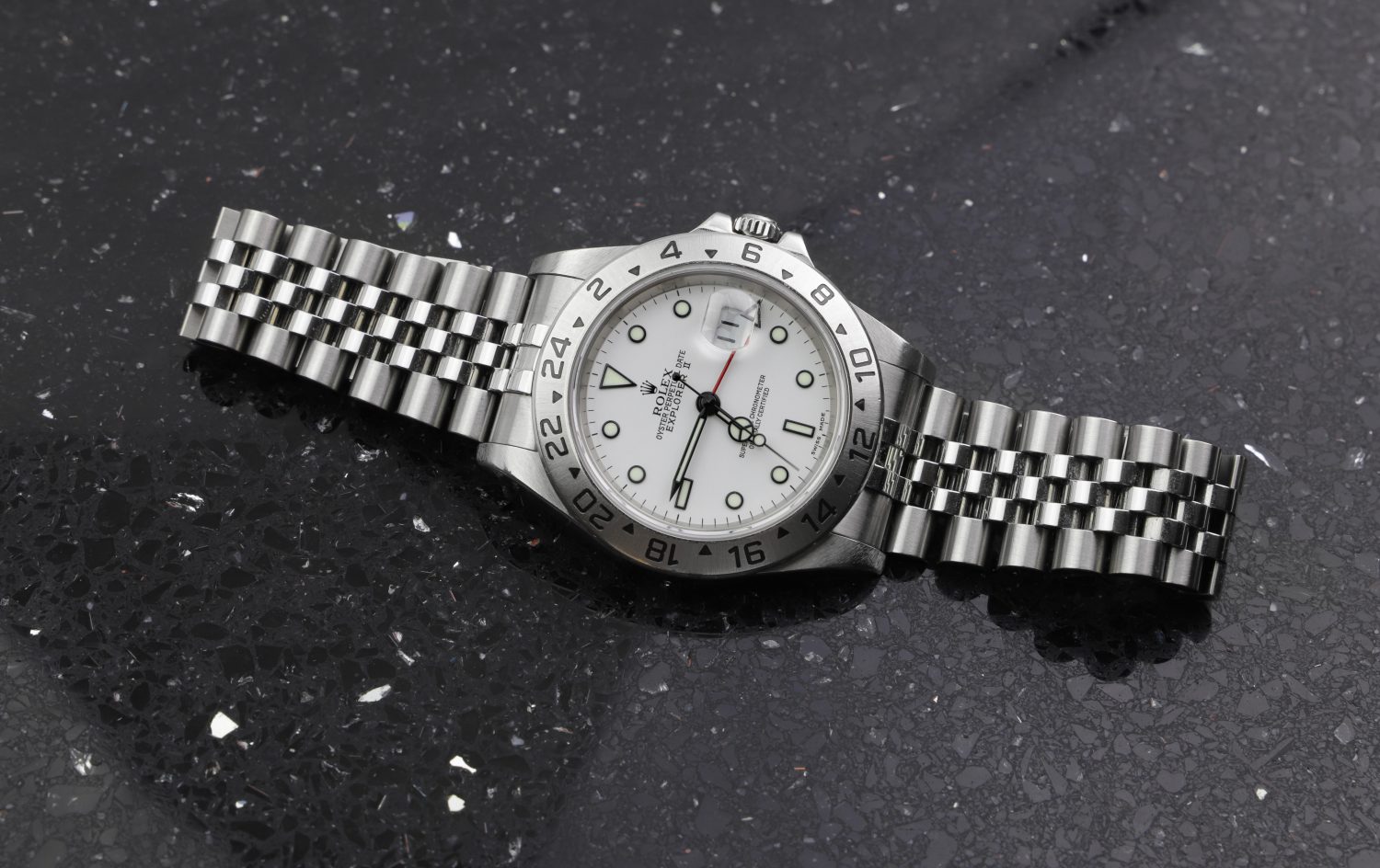 At first, Rolex used tritium as the glowing material, which was the standard at the time. Unfortunately, tritium has a half-life of only 12,3 years, which means that after some time the glowing of the indexes and hands starts to lose its function as it becomes a lot less luminous.

However, as tritium has a half-life of 12,3 years it will actually never stop to function but will be significantly less effective the older the watch gets. The tritium dials are known for having the marking “Swiss – T < 25” at the 6 o’clock position. If the watch does not have this text, it will not be a tritium dial. In 1998 tritium, because of its half-life, got exchanged for Luminova, a material developed by Rolex, which has a half-time of a couple of hundred years. 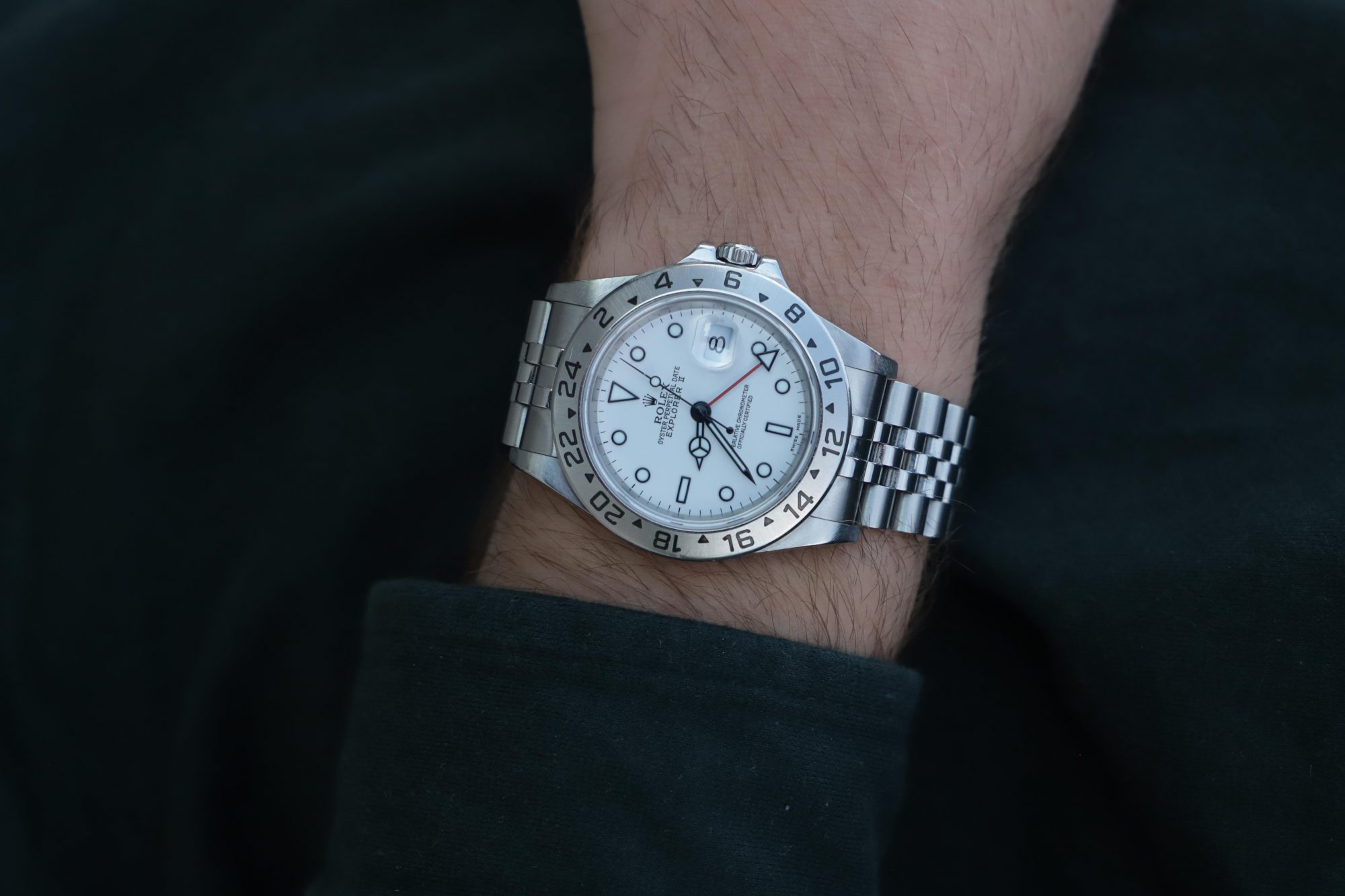 With this said, the new luminous material made the indexes and hands light forever without losing its function a bit! During 1998 and 1999 the dial that had Luminova instead of Tritium had the text “Swiss” written at the 6 o´clock position, this is what commonly is called “Swiss only” dial, as the written text only said “Swiss”. In 2000 the dial text got changed to “Swiss Made” at the 6 o’clock position which makes the “Swiss” only dial rather unique and collectible.

The bracelet was at first the reference 78360 which is a classical oyster bracelet, with hollow end-links and not a safety oyster lock. This construction was well made, but later got updated to the 78790 bracelets which did feature a more tool-function with the oyster lock which makes it even harder to accidentally open the clasp and lose the watch off your wrist.

The 78790 bracelet does also has different configurations with both hollow end-links but also with Solid End Links, also known as SEL in the Rolex dictionary.

At first, the case of the 16570 featured lug-holes which is a drilled hole on each side of the lug where to spring bar is placed in order to hold the bracelet tight to the case. This according to many, gives the watch a more tool-looking appearance but also the possibility to easier take of the bracelet and put the watch on a different strap, if you would prefer.

The case later got upgraded which resulted in removed lug-holes. In the Z-serial Rolex Explorer II, meaning in 2006 and onwards until 2008, Rolex also introduced an updated case with a “Rehaut” which was new to the model.

The rehaut which is the Rolex written text between the dial and glass gives the watch a more modern look according to some. 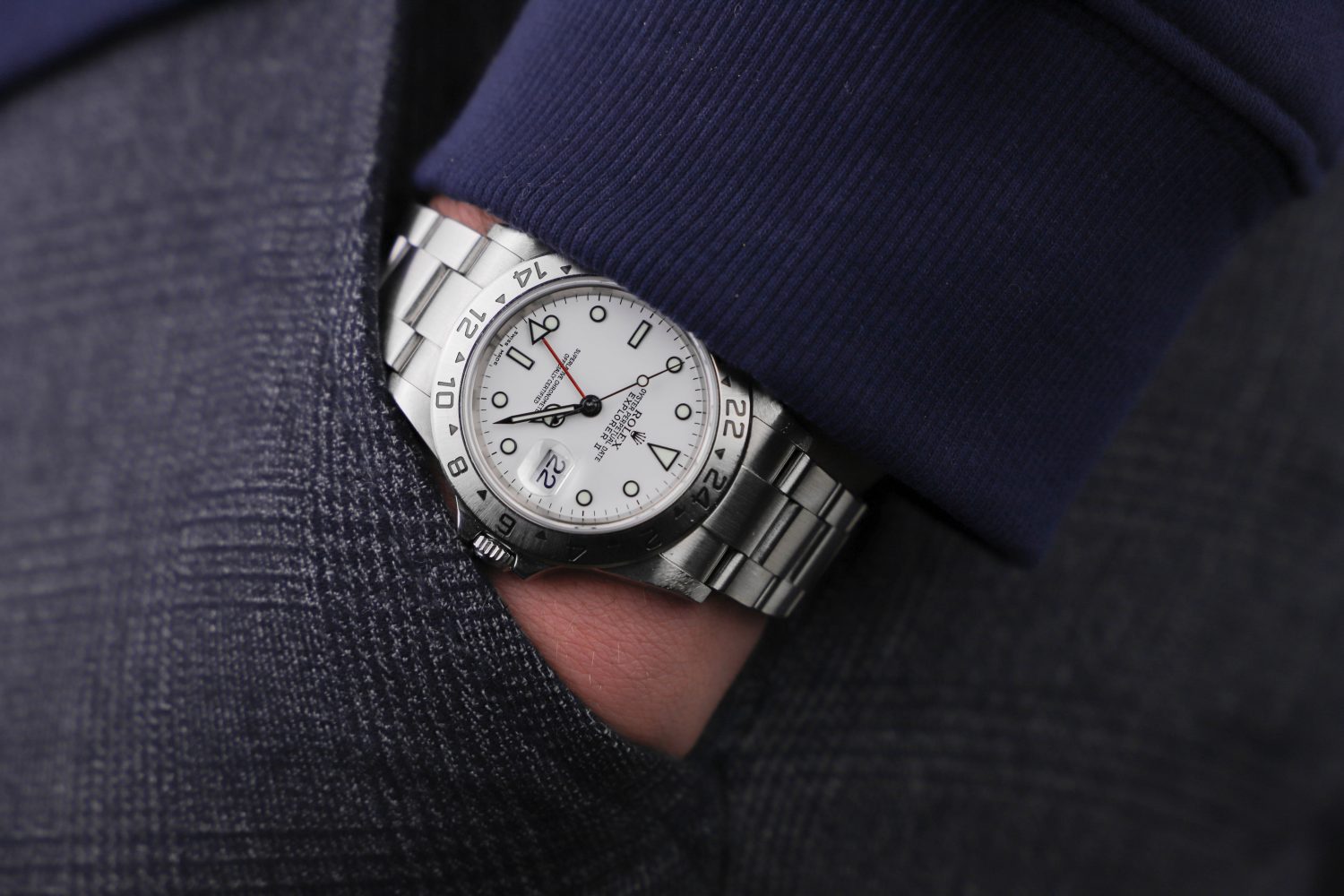 Since the 16570 first appearance in 1989, the movement for the watch has been the caliber 3185, which is the same caliber used in the Rolex GMT Master II reference 16710.

The Caliber 3185 was the first in-house developed movement by Rolex which had an independent hour-hand and hacking seconds, meaning that the second-hand stops ticking once you pull out the crown to set the time. This movement is extremely reliable but had its issues, which mainly were minor issues. For instance, when the hour-hand is manually set, the GMT-hand would wobble which is quite strange and does not give the impression of a fully perfect and functional movement. 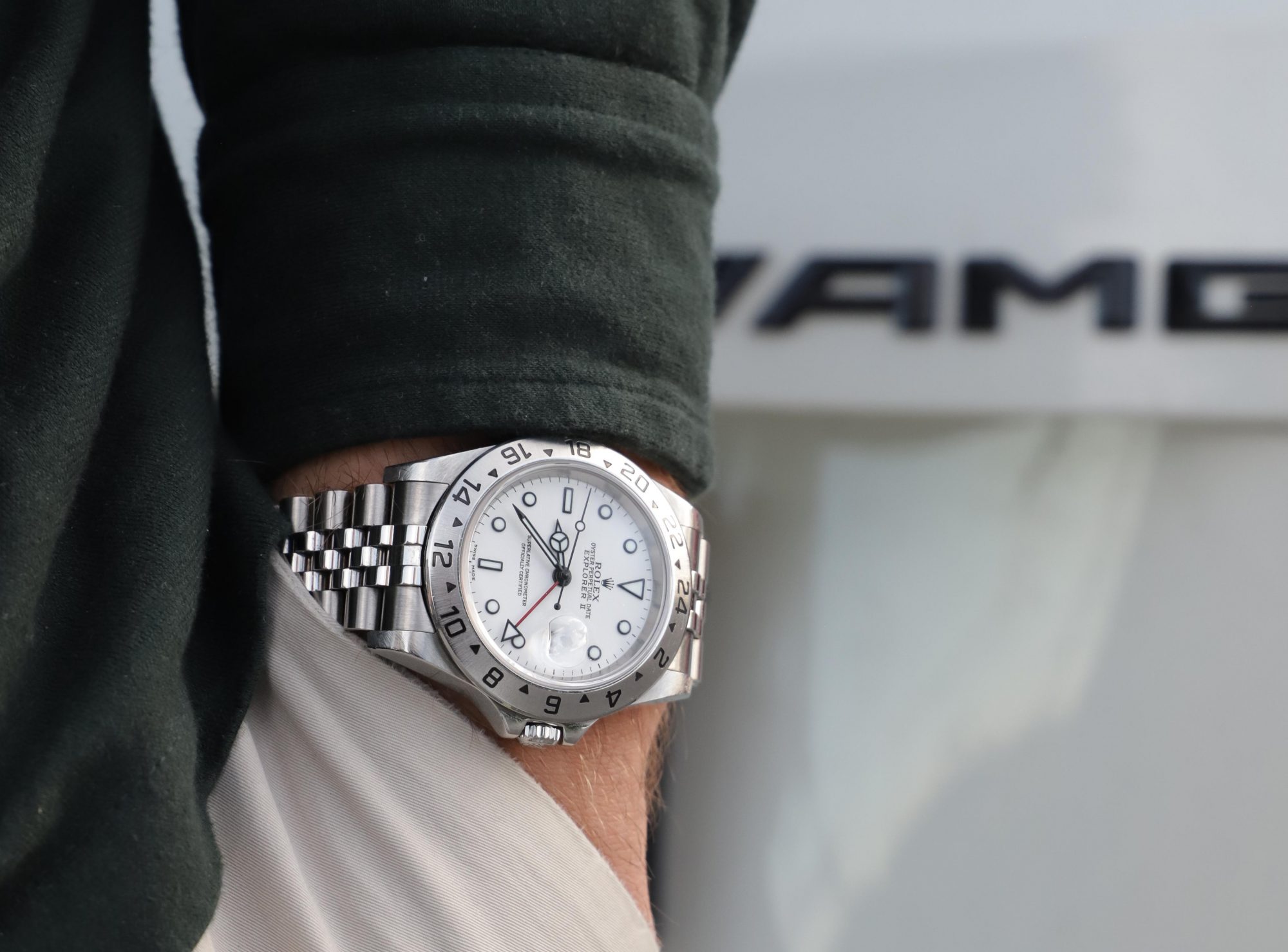 This was however solved in the late Z-serial collection, meaning at the end of 2006, as Rolex evolved the model and introduced a new movement, the caliber 3186, which obviously now solved the issue which gave a “poor” impression with the GMT-hand. This was resolved as the newly introduced hairspring was fitted into the new movement.

As the Caliber 3186 only were in production for a fairly short time, it is highly sought after by collectors. The rarest configuration of them all is the early 3186 calibers which were fitted into cases that not yet had gotten the rehaut engraved between the dial and glass. These were only made in very small and limited quantities and are quite hard to come by. In other words, truly collectible.

In order to find out if you have the 3185 or 3186 movement, it is always a safe and a good way to try the wobble-test. If you set the hour-hand separately the GMT-hand won’t wobble if it’s the 3186 caliber, if it does then the Caliber 3185 is used for the watch.