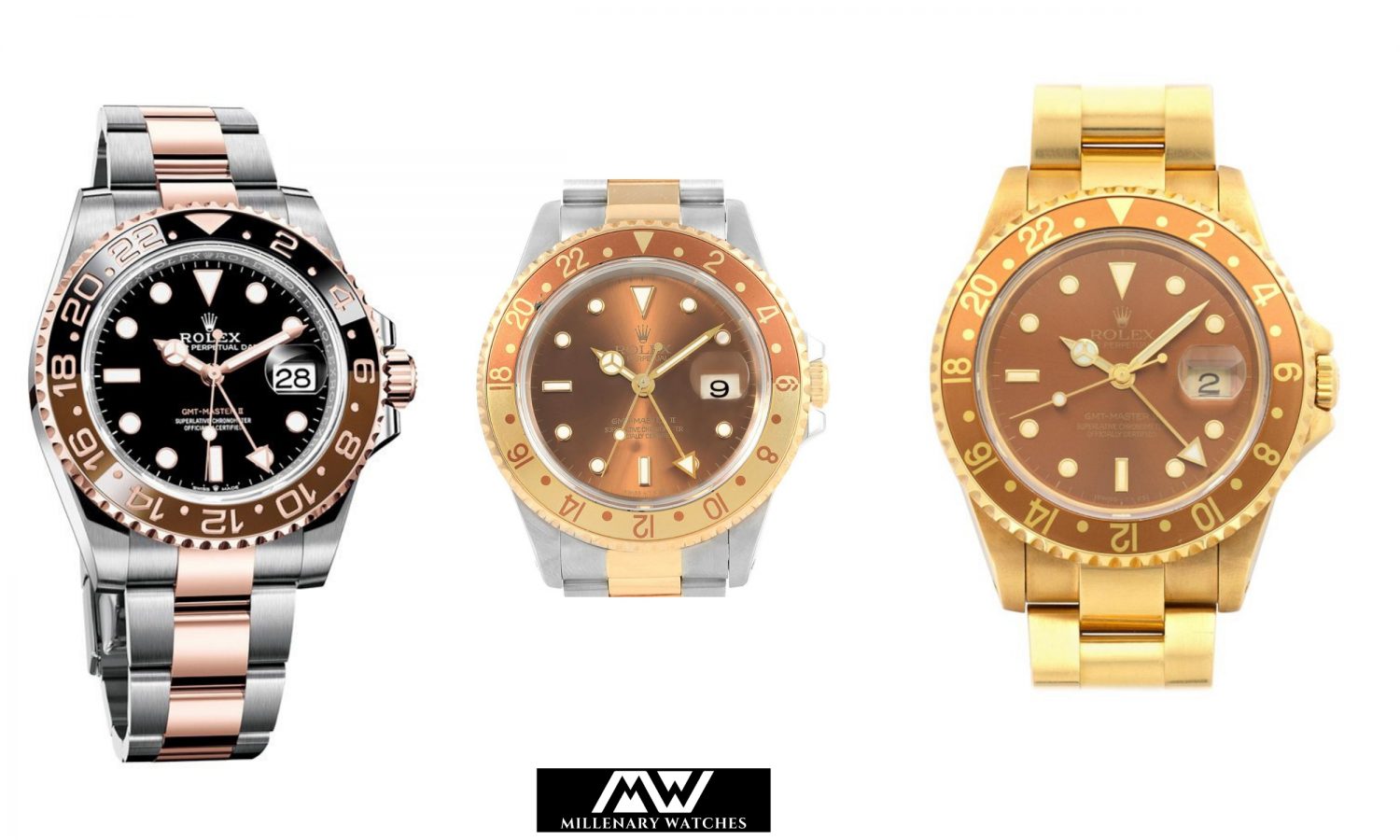 The Rolex Root Beer is a model from Rolex that has a long and interesting history.

The Rolex Root Beer is loved by collectors and appreciated for its unique appearance, and the true Root Beer fans were extremely happy about the releases from Rolex at Baselworld 2018, as it was the year when Rolex brought back and revised, an iconic model.

As you’ve already guessed by now, in this article, we’re focusing on the Rolex Root Beer. But since there have existed several Rolex Root Beers over the years, we’ll go through the whole history of the model, as well as talk about its nickname, and lastly, go into detail about the latest Rolex Root Beer – the GMT-Master II 126711 two-tone Everest gold and steel.

Rolex Root Beer – what is it?

The name itself reveals quite a bit, but to begin with, the name refers to a few specific Rolex models. In particular Rolex GMT-Master models.

Rolex released its first GMT watch in 1954- the reference 6542. The original GMT model featured a two-tone red and blue bezel inspired by the colors of the airline Pan Am – Pan American Airways, due to the fact that PanAm specifically requested a watch that could display two timezones simultaneously. And the Rolex GMT-Master was Rolex’s answer to their request. The Rolex GMT has a 24-hour bezel that can be set against the GMT hand on the dial to track local and home times simultaneously. 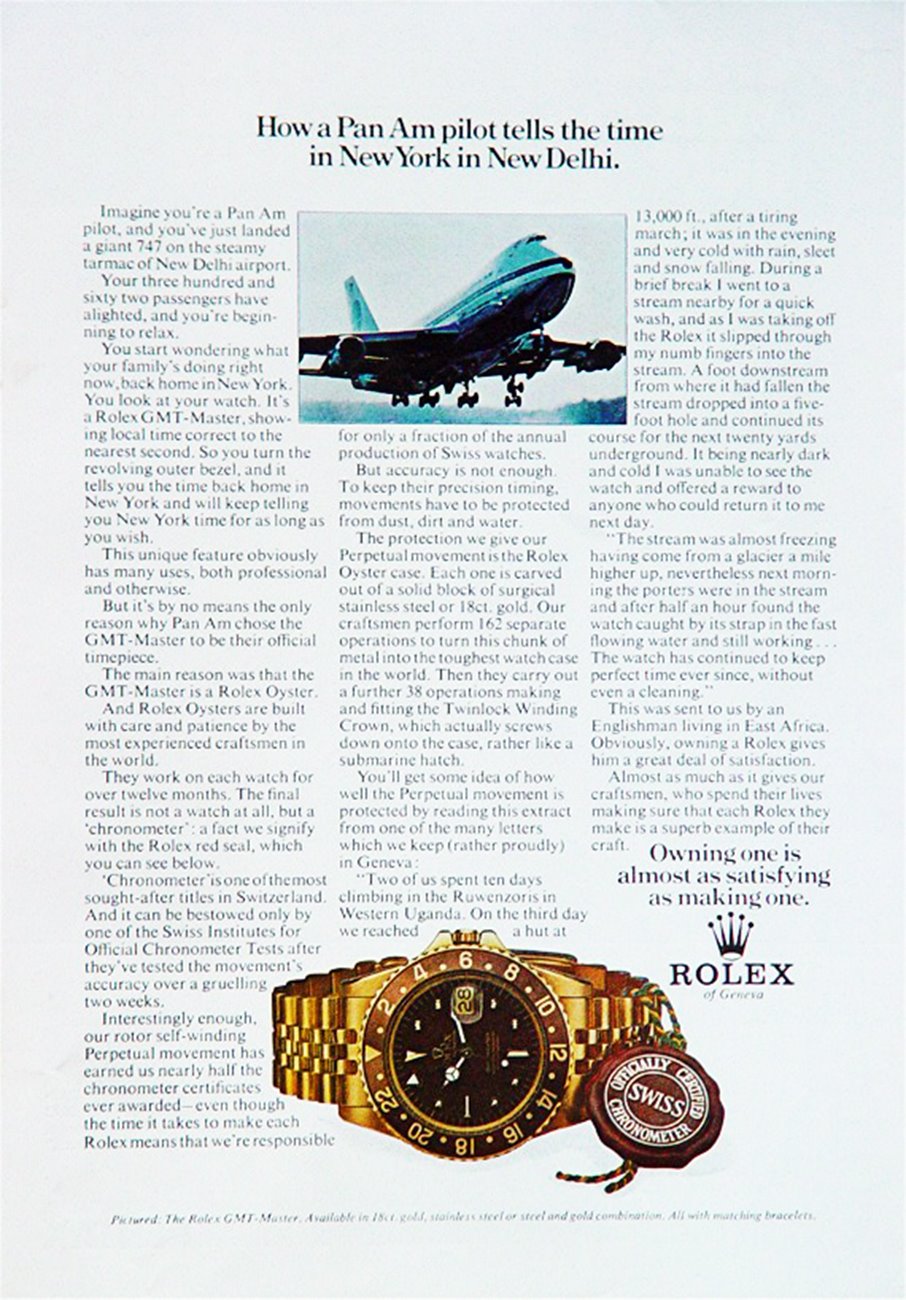 Over the years, Rolex has developed, changed, and experimented, not only with the GMT-Master model but more specifically the color of the bidirectional rotating bezel. Since Rolex launched the first blue and red bezel alternative, Rolex has released a number of different bezel colors since then, but one bezel color that stands out, and which has gotten a particular fanbase and appreciation among collectors is the Rolex Root Beer. 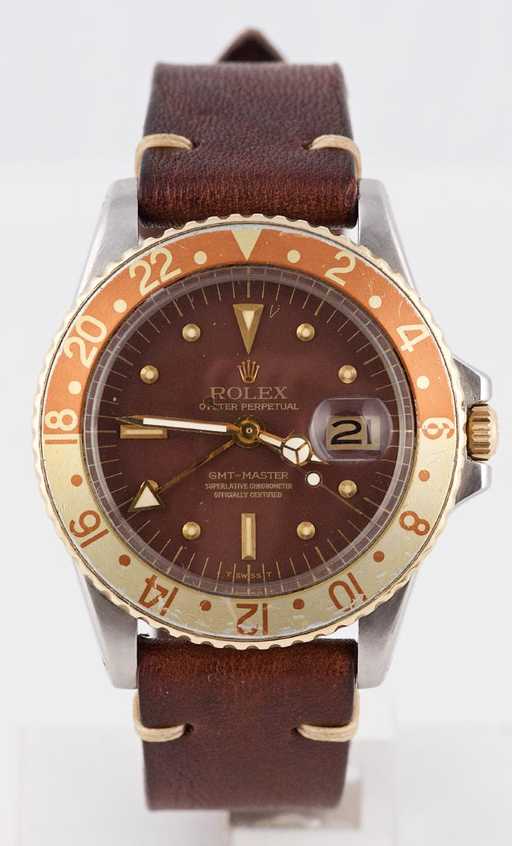 The first Rolex GMT-Master that carved the way for the Root Beer name is a version of this model that features a brown dial and a bezel that is both gold and brown.

As a result of the soda-inspired color scheme on the bezel, the watch acquired the nickname ”Root Beer”. In other words, this nickname is and has never been used by Rolex themselves, but when you mention ”Rolex Root Beer”, everyone who knows watches will know which watch you mean.

Now to the history of the Root Beer, because as you’ve probably realized by now, there are multiple different GMT-Masters on the market that are referred to as Root Beers. Some people argue that there is only one root beer, and that is the first, original root beer model, others argue that all GMT watches with brown bezels, whether two-tone or fully colored, are “root beers”. In this article, we’ll leave it at that.

The first GMT-Master featuring a brown dial was released around 1963. The release of this watch also marked the first time Rolex’s GMT-Master timepiece was made available in two-tone – a combination of both steel and gold. Prior to this release, GMT-Master watches were only available in full stainless steel or full yellow gold. This watch has the reference 16753. 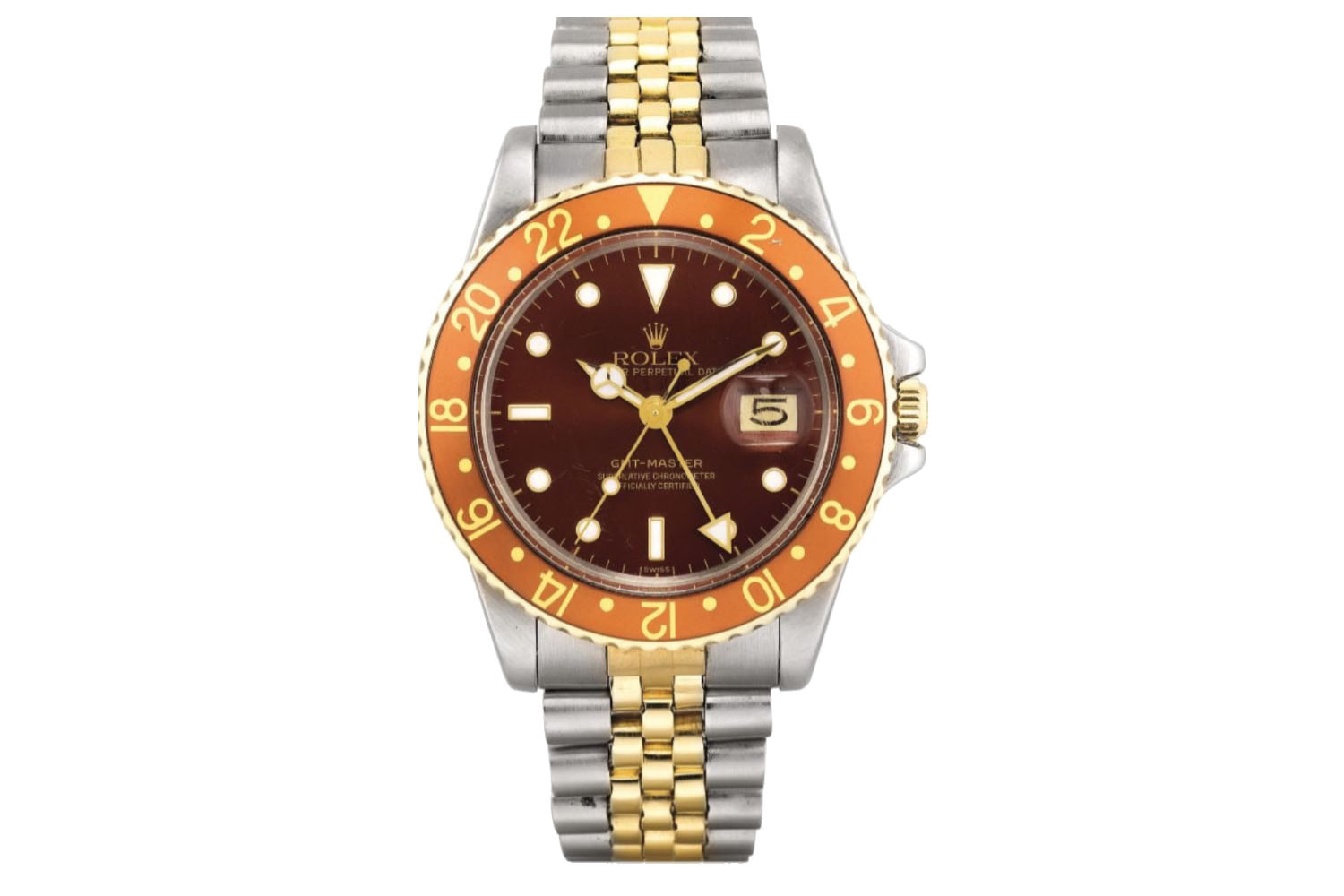 An interesting detail about this model is that it was available either with a black or a brown dial. Now, to be correct, it is only the brown dial version that is the true and original ”Rolex Root Beer”, however, most people also use the Root Beer name to refer to the black dial version, but also the most recent Rolex ”Root Beer” from 2018.

That is not the only nickname that this watch has, however. In fact, the model is sometimes referred to as Tiger Eye because the hue of the dial is reminiscent of the chatoyant gemstone. This is normally a golden to red-brown color.

Lastly, this model also has an additional nickname, and that is ”Clint Eastwood”. The reason is not very surprising since The GMT Master 1675/3 was the famous actor’s favorite Rolex model and he was often seen wearing it. This, of course, had an impact on the watch’s popularity.

The Rolex GMT Master Root beer is now discontinued  since many years back, and since then, the demand for the model has only increased. Due to the limited number of Rolex Root Beer watches, and the high demand for them, they are not only difficult to find, but their prices also reflect this.

Apart from the two-colored bezel, the watch has a brown (or black) dial featuring gold accents.

Today, the Root Beer iteration of the GMT-Master is one of the most unique and highly sought-after iterations.

Despite the prices of the original Root Beer watches having increased quite significantly over the years, the Root Beer is a bit of an underdog model. Part of that may be because Rolex made the Root Beer 16753 for a relatively short period of time, and it wouldn’t be until 2018 that Rolex would come to release a GMT-Master II model that Rolex would release a bezel color scheme that looked remotely close to the original.

It was in 1983 that Rolex decided they wanted to improve and redesign the GMT-Master model, and they did so with the release of the GMT Master II. An eventual key update to this new model was the introduction of the new Cerachrom bezel, and as a result of this introduction, Rolex retired a number of the original bezel colors, including the Root Beer.

If you’re a Rolex Root Beer fan, then 2018 was probably a year of great news for you, at least if you look at the watches that Rolex released at Baselworld.

The release of these two models is significant for several reasons.

First off, both of these watches use Rolex’s own 18ct Rose gold, also named ”Everose Gold” in Rolex terminology. And the use of Everose gold was actually the first time in the GMT-Master II range. But the two-tone version is, of course, the one that stays the truest to the original. 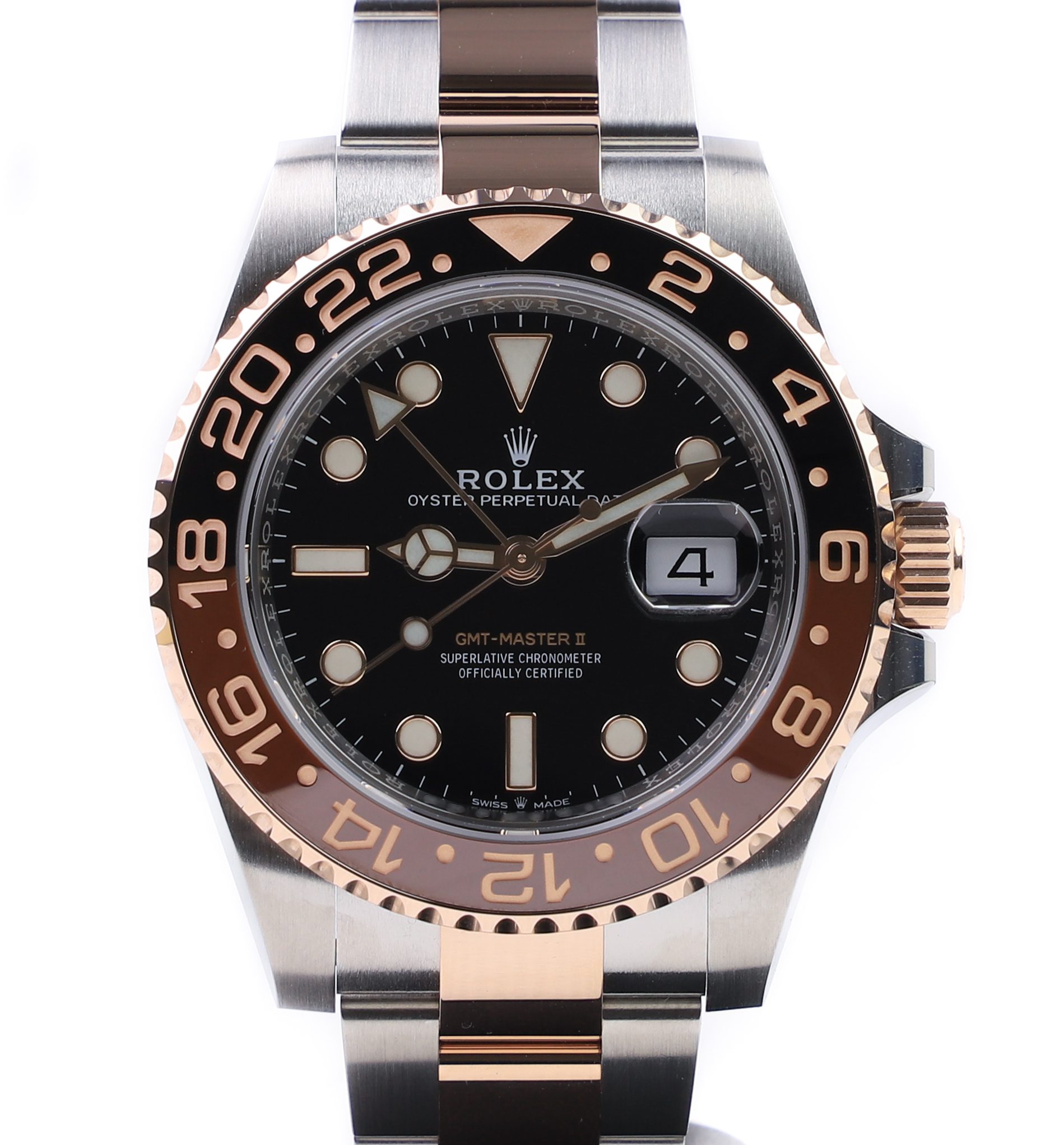 And most importantly to mention is perhaps the fact that these two models have taken inspiration from the Rolex Root Beer from the 1960s.

So what differentiates these two models from the original?

Well, first off, the use of rose gold rather than yellow gold. Secondly, the time is displayed on a black dial –there is no brown dial option at all. The indices and hands on the dials are made in 18k Everose gold  At 3 o’clock, you’ll find the date display with the familiar cyclops, which is no different from the original.

The bezel is where most of the difference is – at least if you consider that the bezel is what defines a Rolex ”Root Beer”. The bezel for this watch is a bi-directional black and brown bi-color made in virtually scratch-proof Cerachrom. The ceramic bezel has molded numerals and graduations coated with pink gold via PVD.

The introduction of this model was the first time Rolex has ever produced this color combination with its patented ceramic material.

As for the bezel differences, the tones of the 2018 Rolex Root Beer are more muted than the original “Root Beer” GMTs. Furthermore, the brown seems to almost blend into the black in lower light conditions. This prevents the watch from not standing out too much in these cases. On the flip side, if you do enjoy the bright bezel colors of the original Root Beers, you may find the modern 126711CHNR or the 126715CHNR too boring.

Something interesting to point out though is that the modern version has a brown and a black dial. This is not the color scheme that the original Rolex Root Beer had, however, the watches are still being referred to as ”Root Beers”. This of course also has to do with the fact that it is very seldom that Rolex releases brown-bezel watches. It is interesting that Rolex decided to not go full-on root beer bezel, but it probably was a good decision as it may otherwise have been too much, and at the same time, the watch wouldn’t have been its own watch, but rather only been compared to the original. 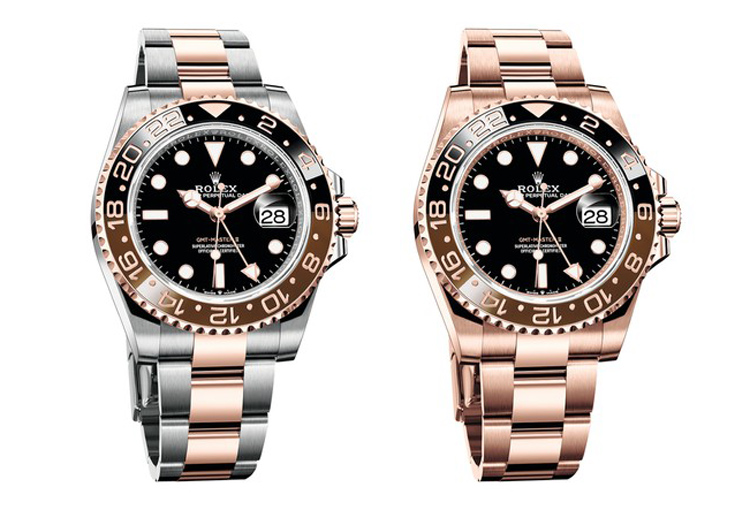 And while it is not a copy of the original, it will be (and has proven to be) a very popular model that authorized Rolex dealers are running short of. But as for the name, it is completely up to you if you think that it is correct to call the 126711CHNR and the 126715CHNR for ”Root Beer”.

A big difference is the new generation caliber fitted in the modern Root Beers. These watches are powered by the caliber 3285 which is, like all modern Rolex movements, entirely developed and manufactured by Rolex. In true Rolex boasting fashion, the movement has 10 patent applications. The movement offers a power reserve of 70 hours.

The case of this watch is obviously a lot different from the watch from the 1960s. The watch now has the maximize and the maximal, which is a much bulkier and sportier case, as well as larger indices on the dial which help improve the legibility.

See all our Rolex watches for sale at MillenaryWatches.